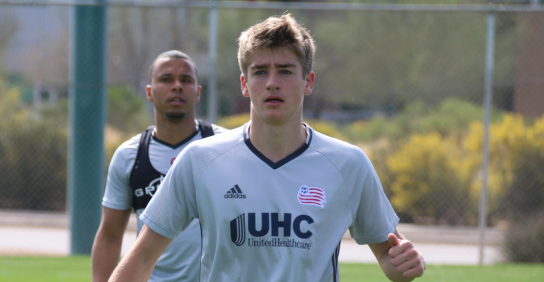 One of the most coveted Homegrown player prospects officially inked a deal with the New England Revolution on Friday.

The Revs signed U.S. Under-20 National Team forward Justin Rennicks to a Homegrown deal after producing a successful sophomore season at Indiana.

“Justin was a talented and productive player during his time in our Academy, and he further distinguished himself at Indiana University and in the U.S. Youth National Team system,” Revs general manager Michael Burns said. “After monitoring his progress closely over the last two years, we felt this was the right time for Justin to take this next step in his development and join the first team.”

Rennicks was a key part of the U.S. U-20 side that won the Concacaf U-20 Championship in November and he should be a key part of Tab Ramos’ side in Poland at the U-20 World Cup.

The Columbus Crew added a Brazilian with a familiar name to their roster on Friday.

Columbus inked 23-year-old midfielder Robinho, who is a different player than the 34-year-old forward who plays in Turkey, to a deal.

Robinho comes to Columbus from Ceara SC of the Brazilian Serie A.

“At 23, Robinho brings experience from more than 100 matches across all competitions in Brazil and we look forward to watching him continue to develop as we believe he adds depth at our wide attacking midfielder position,” Crew president Tim Bezbatchenko said.

Expansion side FC Cincinnati continued to add to its roster by bringing in Costa Rican midfielder Allan Cruz on Friday.

Cruz was transferred to the Eastern Conference side from Costa Rican powerhouse Herediano, who is set to play Atlanta United in the Concacaf Champions League round of 16 in February.

“We are excited to add Allan to our roster,” FC Cincinnati head coach Alan Koch said. “While he is still a young player, he has already found success on the pitch at both the club and international levels. We look forward to getting him acquainted with our club and the city of Cincinnati.”

The Portland Timbers added a young foreign goalkeeper to the roster by signing Aljaz Ivacic on Friday.

Ivacic joins from NK Olimpija Llubljana of the Slovenian PrvaLiga where he’s spent the last two seasons. He lifted both the league title and league cup in 2017-18 and made 55 appearances during his time with the club.

“We are pleased to welcome Aljaž Ivačič to the Portland Timbers,” Timbers general manager Gavin Wilkinson said. “It was a goal of ours to further strengthen this position during the offseason, and this move affords us the opportunity to add to an already strong group.”

Ivacic will occupy an international roster spot with Portland.

The center back is coming off a 2018 campaign in which he was named Young Canadian Defender of the Year.

“Vancouver is a club that I’ve followed for a few years and I’m extremely excited to now be a part of it,” Cornelius said. “This is a good opportunity for me to show the city and club what I can do as an individual and to not just come through, but to really leave my mark here. I look forward to playing in front of the passionate supporters and doing whatever it takes to help the club win.”

Corneilus, who made his senior international debut in March, has three caps for Canada.