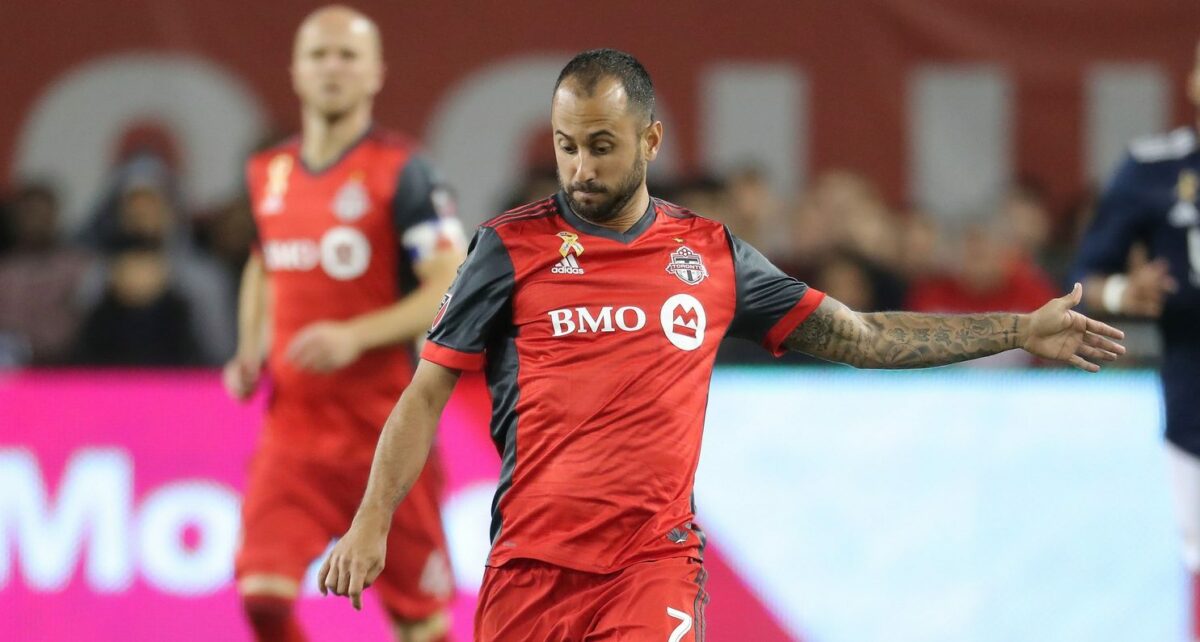 Victor Vazquez added a dynamic element to Toronto FC’s midfield, despite a disappointing 2018 for the 2017 MLS Cup champions, but the Spaniard won’t be around for a third season.

The former Barcelona product looks set to depart the Canadian club for the next chapter in his career.

According to several reports, TFC revealed they’ve agreed to sell the midfielder to a club in Qatar pending the completion of a physical.

No club has been mentioned as Vazquez’s next destination, but TFC head coach Greg Vanney admitted on Tuesday that he doesn’t expect Vazquez in preseason camp.

Vazquez hit the ground running in his debut MLS season in 2017, scoring 10 goals and adding 17 assists in 36 appearances. He also scored in Toronto’s 2-0 MLS Cup win over the Seattle Sounders and was named to the MLS Best XI.

Atlanta United will be forced to kick off the 2019 season without one of their top defenders.

The club announced on Wednesday that right back Franco Escobar will miss approximately six to eight weeks after suffering a fractured right clavicle.

Escobar suffered the injury in training on Tuesday and will at least miss the Five Stripes’ opening leg in the Concacaf Champions League Round of 16 in February.

Escobar made 27 appearances in his first season at Atlanta after joining from Newell’s Old Boys. The defender played a key role in the club’s MLS Cup triumph and scored the second goal against Portland in the league final.

It is unsure who will take his place in the starting lineup with new head coach Frank de Boer now at the helm.

New York City FC won’t be able to call on the services of midfielder Yangel Herrera in 2019.

The 21-year-old is a talented defensive midfielder who made 33 appearances for NYCFC over two seasons. NYCFC was 8-1-3 in games in which Herrera started or featured for more than 20 minutes.

After returning to Manchester City this winter, Herrera had been training with Pep Guardiola’s squad hoping for a chance with the Premier League giants. However, his services could very well help Huesca who need a resurgence in the second-half of the season.

The Portland Timbers made a necessary addition to their back line on Wednesday.

Giovanni Savarese’s side acquired the MLS rights to French defender Claude Dielna via a trade with the New England Revolution. In exchange, Portland is sending $100,000 in General Allocation Money to New England.

Dielna, 31, signed as a Designated Player for the Revs in July 2017 and appeared in 28 games over two seasons. In 2018, the French defender played in 17 matches and logged over 1,330 minutes for Brad Friedel’s team.

“Claude is a player we have monitored closely since his arrival in Major League Soccer over a year ago,” Timbers general manager and president of soccer Gavin Wilkinson said. “After many discussions with the player, it is clear that he has a keen interest in this opportunity to join the Timbers and contribute to the club’s success. His familiarity with the league, along with his global playing experience will be beneficial to the group.”

Prior to his move to MLS, Dielna made over 160 appearances in Europe while playing for teams in England, France, Greece, Romania, and Slovakia. His longest spell came with Ligue 2 side Istres where he made 62 appearances between 2008-12.

The LA Galaxy kept a veteran presence in their midfielder with the re-signing of Servando Carrasco on Wednesday.

Carrasco, 30, joined the Galaxy ahead of the 2018 season and went on to make 19 appearances for the Western Conference club.  Carrasco has also played for the Houston Dynamo, Sporting Kansas City and Orlando City SC. In total, the midfielder has made 145 appearances in MLS with 87 starts, scoring twice goals and chipping in seven assists.

“We are pleased to come to terms with Servando on a new contract,” LA Galaxy Manager Dennis te Kloese said. “His extensive MLS experience and knowledge of our team and organization will add a good layer of depth to our roster.”

The Galaxy opens the 2019 MLS regular season at Stubhub Center against the Chicago Fire.

Bob Bradley will have a pair of talented centerbacks back in 2019 after LAFC re-signed them on Wednesday.

The club announced it re-signed Danilo Silva and Dejan Jakovic to new contracts. Both players made double-digit appearances for LAFC in 2018 and will be aiming for more playing time this season.

Silva initially joined LAFC on a six-month loan in the summer transfer window, making 11 appearances in all competitions. His only goal of the season came in their 3-2 knockout round defeat to Real Salt Lake in the MLS Playoffs. Prior to his move to MLS, Silva spent two seasons in Brazil’s Serie A while also making over 220 appearances with Ukrainian giants Dinamo Kiev.

Jakovic, 33, made 15 appearances in all competitions for LAFC and surpassed 100 MLS appearances for his career last March in a 5-1 win over RSL. He also spent time with the New York Cosmos of the NASL, D.C. United, and Red Star Belgrade of the Serbian First Division.

“Re-signing Danilo and Dejan was always part of our offseason plan, and we’re excited that both players will be returning in 2018,” LAFC GM and EVP of Soccer Operations John Thorrington said. “Danilo and Dejan add veteran leadership and experience to the group, and we’re confident they will both contribute to the success of our club.”

Orlando City made yet another offseason move on Wednesday, as the Eastern Conference club added a young defender to their roster.

The Lions signed Brazilian right back Ruan to a one-year contract ahead of the upcoming season. The 23-year-old joins the Lions from Brazilian Serie B outfit Associacao Atletica Ponte Preta, where he was on loan.

Over the last two seasons, Ruan made 49 appearances for Sport Club Internacional and Atletica combined. With Atletica, he helped them keep nine clean sheets while making 17 appearances including a seven-match consecutive appearance streak.

“We are very excited to welcome Ruan to Orlando City. He is a dependable right back that has excellent speed and is dangerous in his transition on the offensive side of the ball,” said Orlando City SC executive vice president of soccer operations Luiz Muzzi. “As a club we continue to provide depth on our roster and build competition within the group as we head into our 2019 preseason.”

Toronto FC may be losing a star midfielder but they re-signed two squad players to new contracts on Wednesday.

TFC announced they’ve re-signed midfielder Tsubasa Endoh and forward Jordan Hamilton for the 2019 season. In two seasons with Toronto, Endoh made 30 appearances with three goals and one assist. He spent most of the 2018 season with USL affiliate TFC II. In his career he’s made 28 appearances, registering 11 goals and three assists during in the USL.

“Both Tsubasa and Jordan have continued their development and improved into players who are ready to help the first team,” Toronto FC General Manager Ali Curtis said. “Both players have persevered and worked hard to earn these contracts. We are excited to know Tsubasa and Jordan are going to continue playing for TFC.”

The 22-year-old Hamilton has made 51 career appearances for TFC in all competitions, scoring 10 goals and adding five assists. He’s also won two caps for the Canadian National Team.

After an unsuccessful spell with Orlando City SC, forward Stefano Pinho is reportedly looking for a new club.

The 28-year-old broke the news via social media on Wednesday, with Pro Soccer USA later confirming his departure. In 23 appearances with the club, Pinho scored two goals while only making five starts for the struggling Eastern Conference club.

A former two-time NASL MVP and Golden Boot winner, Pinho racked up 38 goals in 60 appearances between time with the Fort Lauderdale Strikers and Miami FC. He also spent time with Minnesota United in 2016, scoring five times in 25 appearances.

A native of Brazil, Pinho is now a free agent.