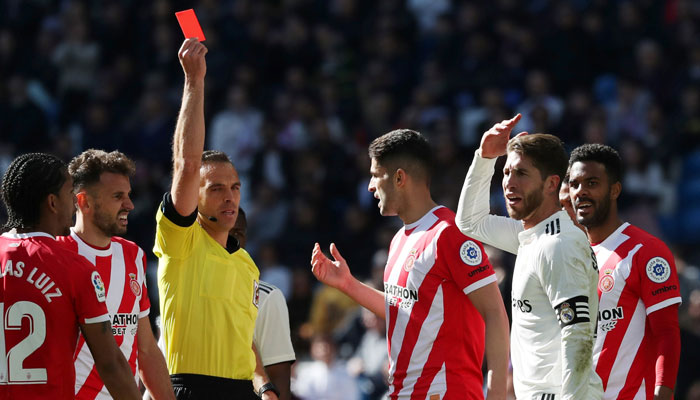 Real Madrid was handed a shocking home defeat on Sunday as Los Blancos fell 2-1 to Girona.

Despite holding a first-half advantage, Real Madrid saw their lead evaporate in a 10-minute span after the hour mark. Christian Stuani’s 65th minute penalty kick leveled the score at the Santiago Bernabeu before Portu’s right-footed winner moved Girona to 15th in the standings. Real Madrid’s frustration boiled over as Sergio Ramos was sent off in the final minutes, seeing a straight red. Los Blancos dropped to third place following Atletico Madrid’s win on Saturday.

Elsewhere, Manchester City booked a place in the FA Cup quarterfinals while Barcelona also claimed a win thanks to Leo Messi. Bayern Munich shrinked the gap in the Bundesliga standings and Borussia Dortmund are in action on Monday. Inter Milan and Juventus claimed important wins while Napoli dropped points. Marseille continued a rise with Mario Balotelli leading the attacking front.

Manchester City used a four-goal second half to roll past Newport County 4-1 at Rodney Parade. Leroy Sane’s composed finish in the 51st minute broke the deadlock before Phil Foden extended the lead in the 75th. Padraig Amond chipped Ederson in the 88th minute to give Newport a late lifeline but it would be a mere consolation. Foden scored his second of the evening and Riyad Mahrez capped the final score at 4-1 to propel Man City into the quarterfinals.

Watford booked a place in the quarterfinals of the FA Cup with a 1-0 win over Queens Park Rangers on Friday. The lone goal in the match came before halftime as Etienne Capoue’s right-footed finish broke the deadlock in the first-minute of stoppage time. QPR had one shot on goal and Toni Leistner’s last-minute effort was the best chance to score an equalizer.

Here’s all of this weekend’s FA Cup results:

Sevilla’s winless run in domestic play was extended to four matches as the visitors were spanked 3-0 at Villarreal. Alvaro Gonzalez’s header in the 20th minute gave the hosts an early advantage before Karl Toko Ekambi extended Villarreal’s advantage before halftime. Alfonso Pedraza’s third goal of the season iced the impressive performance by the hosts who moved up to 18th with the win. Sevilla stay in fourth place and return to Europa League action midweek.

Bayern Munich made it three wins in a row in all competitions after a 3-2 triumph over Augsburg on Friday. Kingsley Coman’s 17th minute equalizer drew Bayern level after Leon Goretzka’s own goal in the first minute gave the home fans an early celebration. Ji Dong-Won’s second goal of the campaign put Augsburg back in front after 23 minutes. Coman netted his second of the match before halftime ahead of Daniel Alaba’s winning goal in the 53rd minute. Bayern have shrunk the gap to two points in the Bundesliga table while Augsburg are in 15th.

Juventus made it back-to-back 3-0 wins after another clean sheet on Friday over Frosinone. Paulo Dybala and Leonardo Bonucci each found the back of the net in the opening 17 minutes to give the Old Lady a two-goal lead. Cristiano Ronaldo’s 20th goal in all competitions added insurance in the second-half as the Portuguese forward continued his fine form. With the win, Juventus are 13 points clear in Serie A over Napoli while Frosinone are five points from safety.

Inter Milan used a pair of goals separated by five minutes late in the second-half to down Sampdoria 2-1. Danilo D’Ambrosio’s close-range finish in the 73rd minute broke the deadlock at the Giuseppe Meazza but Sampdoria would answer in quick fashion. Manolo Gabbiadini leveled the score two minutes later before Inter would steal a winner through Radja Nainggolan’s long-range strike. Inter are seven points back from second place while Sampdoria drop down to 10th.

Marseille made it three consecutive wins after a 2-0 triumph over Amiens on Saturday. Both goals were scored over a six-minute span before the half hour mark. Florian Thauvin opened things in the 19th minute with his 14th goal in all competitions. Mario Balotelli’s immediate impact with his new club continued as the Italian scored in the 25th minute for his third goal in four appearances. Marseille are up to fourth with the win at the Stade Velodrome while Amiens are down to 17th.