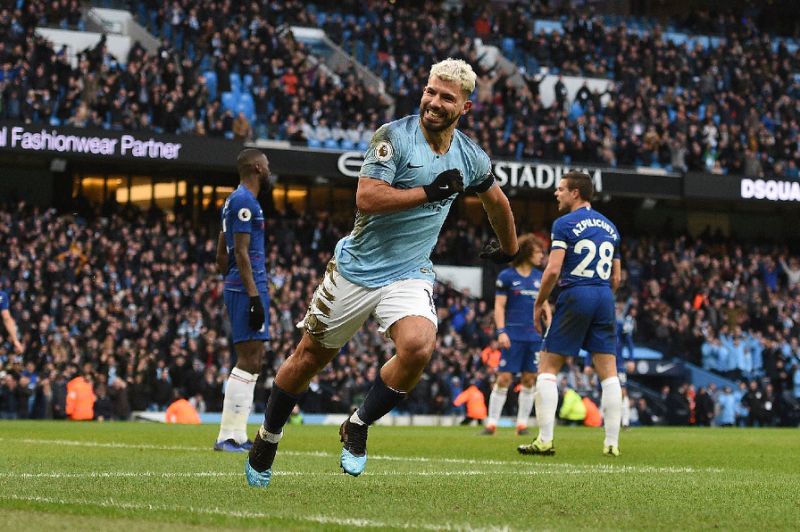 Manchester City’s clash with Chelsea on Sunday was truly important in the English Premier League title race. 90 minutes later and the defending champs jumped back to the top of the league thanks to a 6-0 hammering of the Blues.

City led 4-0 after 25 minutes, with Aguero scored two of his goals. Sterling opened things in the fourth minute, before Aguero rifled home from long-range in the 13th. The Argentine added to the lead in the 19th minute, before Gundogan beat Kepa from a long-range missile of his own. Aguero capped his hat trick in the 56th minute from the penalty spot before Sterling tapped in his second of the match later in the half. With the win, Man City sit ahead of Liverpool on goal difference while Chelsea drop into sixth place.

Elsewhere, Bayern Munich claimed an important home win over Schalke while Borussia Dortmund blew a three-goal lead at home. Real Madrid moved up to second place in La Liga after defeating city rivals Atletico on Saturday. Cristiano Ronaldo was amongst the goals against for Juventus while Inter Milan also won on the road. PSG edged Bordeaux in Ligue 1 play but lost Edinson Cavani to an injury in the process.

Manchester United put themselves in the top-four after a 3-0 drubbing of Fulham at Craven Cottage on Saturday. Paul Pogba led the Red Devils with a brace while Anthony Martial had a goal and assist. Pogba’s 14th minute opener had Man United up early before Martial bagged his 11th goal in all competitions. Pogba iced the win after the hour mark from the penalty spot, giving the Frenchman 13 goals in all competitions now. The Red Devils remain nine points back of third-place Tottenham while Fulham sit seven points from safety.

Real Madrid jumped into second place after breezing by their rivals Atletico 3-1 on Saturday afternoon. It was a pretty even first-half with both sides scoring in the opening 25 minutes. Antoine Griezmann canceled out Casemiro’s opener at the Wando Metropolitano before Sergio Ramos swung the match in Real’s favor. The centerback scored from the penalty spot after 42 minutes while Gareth Bale iced the win in the 74th minute. Atletico now has suffered back-to-back league defeats which sees them a point back in third place.

Bayern Munich took advantage of Borussia Dortmund’s draw with a 3-1 beatdown of Schalke at home. After a trio of goals in the opening 27 minutes, Bayern would eventually kill the match off in the second-half. An own goal by Jeffrey Bruma gave Bayern an early lead before Weston McKennie set up Ahmed Kutucu to pull Schalke level. Robert Lewandowski’s right-footed finish retained the lead for Bayern in the 27th minute. Serge Gnabry’s header before the hour mark proved to be the nail in the coffin which sees Bayern jump into second-place. Schalke are in 14th after the loss, but sit seven points clear of the relegation zone.

Hoffenheim used three goals in the final 15 minutes to grab a point at Borussia Dortmund in a 3-3 draw. After goals by Jadon Sancho, Mario Gotze, and Raphael Guerreiro, it looked bleak for Hoffenheim but the visitors kept fighting and got their reward. Ishak Belfodil started the comeback in the 75th minute before Pavel Kaderabek headed in Hoffenheim’s second goal. Belfodil headed in from a set-piece after 87 minutes to complete the comeback for Hoffenheim.

Juventus extended their lead over Napoli back to eight points after a 3-0 win at Sassuolo on Sunday. Cristiano Ronaldo doubled Juventus’ lead in the 70th minute after Sami Khedira’s first-half opener had the Old Lady in front. Emre Can’s second goal of the season added insurance for Juventus who went on to grab their first win of the new month. As for Ronaldo, he now has 19 goals in all competitions including four in his last four matches.

Inter Milan snapped a four-match winless run in all competitions with a 1-0 triumph at Parma. After it looked like both teams would have to settle for a point, Inter got the breakthrough goal in the final 15 minutes. Lautaro Martinez’s sublime right-footed finish broke the deadlock in the 79th minute, giving Inter all three points. Inter remains in third place but are way behind the top-two, while Parma are in 12th.

Paris Saint-Germain bounced back from their first league loss of the season, but lost another talented attacker in the process. Edinson Cavani’s 42nd minute penalty kick proved to be the difference in PSG’s 1-0 win over Bordeaux, but the Uruguayan left the match with a hip injury. Both teams had three shots on goal, but PSG held on for all three points at home. Cavani is now a doubt to miss PSG’s first leg of the UEFA Champions League against Manchester United on Tuesday due to the injury.