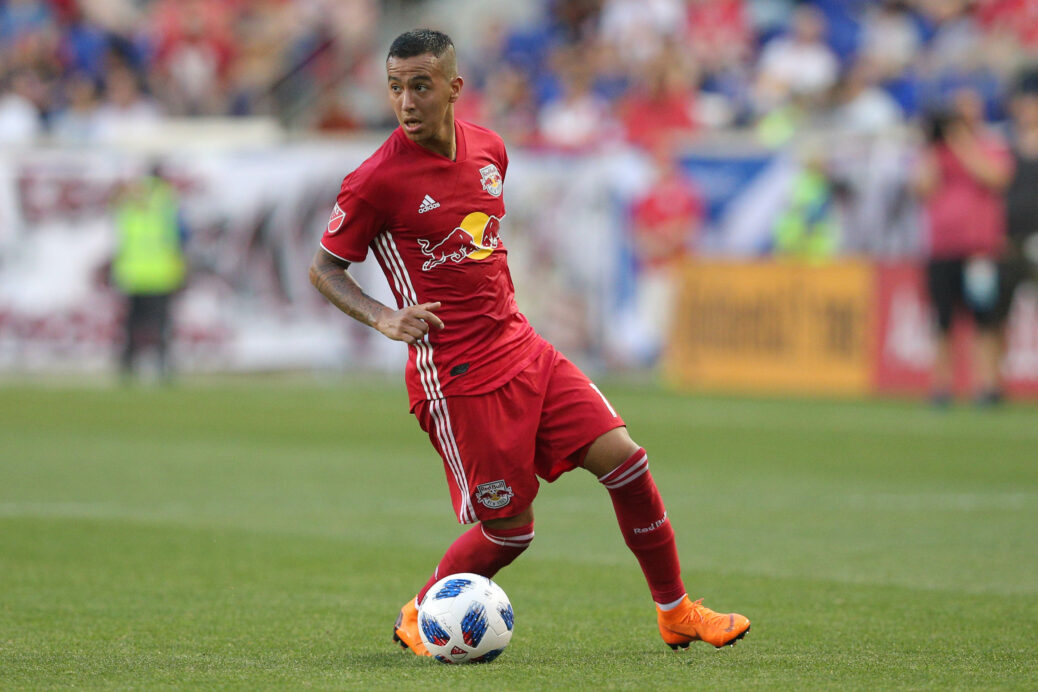 HARRISON, N.J. — Alejandro ‘Kaku’ Romero Gamarra knows some New York Red Bulls fans were not pleased with his recent transfer drama, but all he is really worried about right now is showing his commitment to the club with his play.

Kaku is heading into his second season with the Red Bulls, but only after dealing with a transfer saga that involved him, his agent Gustavo Casasola, and Club America. The Liga MX side came in with an offer for Kaku in late January just as the Red Bulls were in the opening stages of their preseason, but they quickly turned it down, which prompted Casasola to publicly and angrily express his dismay over what he felt was ongoing poor treatment of his client. Casasola even used Adolf Hitler in a reference to illustrate the Red Bulls’ behavior towards Kaku.

Those comments did not go over well with fans and brought into question Kaku’s commitment to the Red Bulls, something that the 24-year-old playmaker is aware of but not overly concerned about.

“I always maintained a calm manner, training and thinking about playing. That’s what I did since the first weekend that preseason started: left everything aside. Afterwards, I continued with the same humility and do what I know how to do on the field.”

Of course, it also did not help matters that Kaku’s Twitter account published tweets that seemed to angle for the move while also liking a steady stream of tweets from Club America fans that hoped the transfer would materialize.

Some Red Bulls supporters questioned then whether it was Kaku or Casasola that ran the account, but Kaku said on Monday that it was he who used the social media platform while also backing his agent.

“Then come the negotiations part, which happens everywhere and which will happen throughout the length of my career. The Red Bulls are the ones to decide if they want to sell me or not. I always trained and was at 100 percent, and the people and my teammates can keep calm. I’m going to give my all to win (MLS Cup), which is what we all want.”

As for whether it was a distraction, Red Bulls head coach Chris Armas said earlier this month that it was not and that Kaku was 100 percent committed to the team’s cause.  Kaku seconded that notion on Monday, as did Red Bulls captain and goalkeeper Luis Robles.

“Absolutely I was aware of it and I know it was at times a contentious situation, but not with him. He’s been great,” Robles told SBI. “It speaks to his professionalism and his character because in training he was phenomenal, he was fit, he brought just a different dimension to training because of who he is as a player. That was worlds away from him.”

For Kaku, the focus has long been on the looming season and piecing together a strong year both from collective and individual standpoints. He knows that he may have lost some of the good will he had built up with the Red Bulls’ fan base, but he insists that his effort will once again be at its maximum capacity in 2019.

“People always get mad over things like that, but I’ve always demonstrated (my commitment) on the field and I will always do things in the same way,” said Kaku. “My teammates support me. The coach knew what I thought. The Red Bulls know how I am so I always stayed calm.

“Sometimes people get upset over things, but teams wanting me will always happen over the length of my career. That speaks well about what the Red Bulls are doing and what we’re doing on the field, but let’s hope that we all stick together and the fans keep supporting because that’s what most important for the Red Bulls.”