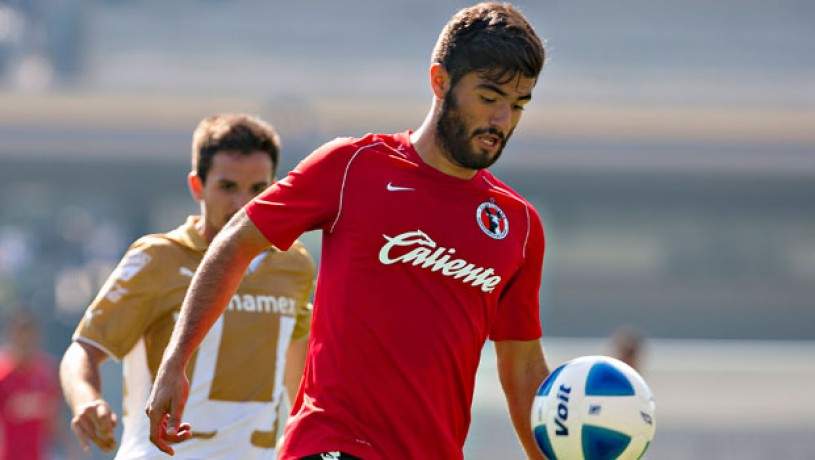 LAFC continued their preparation for the 2019 MLS season with the signing of a former U.S. youth player.

The club announced on Wednesday they’ve signed Alejandro Guido from Club Tijuana. Guido, 24, has been with LAFC on trial for most of their preseason and has spent his last seven seasons with Xolos.

In 56 appearances with Xolos, Guido scored two goals but only touched the field 11 times in 2018. He helped Xolos to the playoffs but joined up with LAFC before the start of the 2018-19 Clausura season.

“Alejandro has all the attributes to succeed in this league and we believe he will have an immediate impact,” LAFC GM and EVP of Soccer Operations John Thorrington said. “His qualities will prove to be a good fit with what we’re trying to implement this year and we look forward to his contributions over the course of the campaign.”

Guido has represented the U.S. at the U-17, U-18, U-20, and U-23 levels during his career. He earned his first senior call up to the USMNT last May in a friendly against Bolivia.

The club announced on Wednesday that the Costa Rican centerback will wear the captain’s armband for the 2019 season. Waston joined the expansion side from the Vancouver Whitecaps where he logged 115 appearances from 2014-18.

“Kendall is an exemplary leader for our team both on and off the pitch,” FC Cincinnati head coach Alan Koch said. “When building our roster, we placed a strong emphasis on not only adding quality players, but also somebody who could inspire the players around him. Kendall is someone who is very deserving of the honor of the club’s first-ever MLS captain.”

Waston has twice been named to the MLS Best XI (2015 & 2017) and was named an MLS All-Star in 2016. He has also won 30 caps with Los Ticos, debuting in his first FIFA World Cup last summer in Russia. Waston scored Costa Rica’s first goal of the tournament against Switzerland.

“It’s a huge honor for me to be the team captain,” Waston said. “It’s a big responsibility. I know everything that surrounds it. We have big expectations, but the good thing here is that everybody is fighting for the same goal. We want to lift MLS Cup. It’s not going to be easy, but with the work of every individual, everything can be possible.”

FCC opens their MLS schedule on March 2nd against the Seattle Sounders.

The Galaxy announced on Wednesday they signed Cuello after selecting him 19th overall in the 2019 MLS SuperDraft back in January. The 22-year-old spent four years at Southern Methodist University (SMU) where he scored 12 goals and added 17 assists in 72 appearances for the team.

“We are excited to welcome Emil to the LA Galaxy,” Galaxy GM Dennis te Kloese said. “He has played well during our preseason, showing his abilities and technicality. We look forward to Emil official joining our roster and his contributions during the upcoming season.”

Cuello is coming off a senior season at SMU where he was named First Team All-American Athletic Conference and the MVP of the AAC Tournament.

The Seattle Sounders added a versatile defender to their roster on Tuesday.

After being a guest player during the 2019 preseason, Saad Abdul-Salaam has officially been signed by the Sounders. The Sounders acquired his rights from NYCFC in exchange for $50,000 in Targeted Allocation Money.

Abdul-Salaam, 27, has made 68 appearances since joining MLS in 2015, while recording one goal and 10 assists. He was drafted No. 12 overall in the 2015 MLS SuperDraft by Sporting KC and would spend three seasons with the club prior to moving to NYCFC.

“We are pleased to welcome Saad officially into the club, after he showed his diverse skillset during preseason camp,” Sounders GM and President of Soccer Garth Lagerwey said. “Saad has experience both at fullback and in central defense, and his athleticism will serve our team well across our backline. We are excited to see what he brings to the squad over the course of the season.”

Abdul-Salaam will hope to make his Sounders debut on March 2nd against FC Cincinnati.