Unfortunately for them, however, it was the same old story in the playoffs.

The Red Bulls pieced together an incredible MLS campaign from March until October, winning their third Supporters’ Shield in six years and finishing with the best regular-season record in league history. What made those accomplishments even more impressive is that the club achieved them with a fairly young team and one that experienced a coaching change midway through the campaign.

It really looked and even felt at times that things were going to be different for these resolute and energetic Red Bulls, but their postseason demons came back to haunt them. Once again, they fell just short when it mattered most.

The resulting disappointment may have hurt initially, but is now serving as fuel for the club as it attempts to contend yet again for that elusive first MLS title. One major plus in the Red Bulls’ quest for championship glory is that the bulk of the core cast from last year is back, but there is also a massive hole in the lineup to fill and how they go about filling that will ultimately make the difference between the club progressing and regressing.

“Regardless of who’s in there, we have very high standards and very high expectations of the guys that are playing,” Red Bulls captain Luis Robles told SBI.

Here is a closer look at the New York Red Bulls heading into 2019: 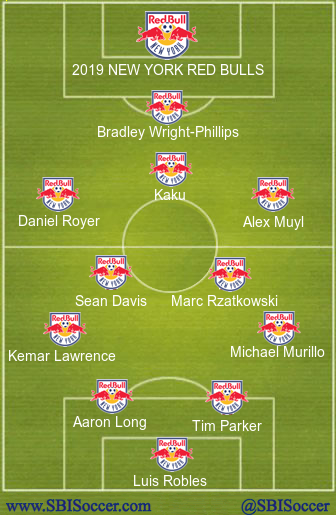 While there still seems to be plenty of tread on Bradley Wright-Phillips’ tires, there is no denying the Red Bulls could use another quality striker to help lighten nearly-34-year-old Englishman’s workload. Enter into the picture Jorgensen, a teenage forward that the club signed on Feb. 12 for a reported transfer fee of $2.5 million. The Red Bulls are expecting Jorgensen, 18, to contribute to the first team right away, and though he will surely do so as a bench player, there should be ample opportunity for him to see the field as the team begins to prepare for life after Wright-Phillips.

PRESSURE IS ON: Chris Armas

The Red Bulls were within a stone’s throw of hosting the MLS Cup Final last year, but a questionable shift in tactics from their head coach during the first leg of the Eastern Conference Finals series helped doom them. That disaster in such an important moment combined with his inexperience has not done much to convince skeptics that he is the right man to lead the Red Bulls to the promise land.

What’s more is that this will be his first full season in charge of the club after taking over at the halfway point of 2018 and he will no longer have the menacing Tyler Adams at his disposal. How Armas gets creative in replacing the talented midfield cog (who was an MLS Best XI player last year) and freeing up playmaker Alejandro ‘Kaku’ Romero Gamarra will show just how good of a manager he is, and will go a long way in determining if the Red Bulls can contend yet again.

The club has brought back almost all of the key figures from a record-setting 2018, including Marc Rzatkowski, but the lone piece that departed was one of the biggest. The talented Tyler Adams left for Europe in the offseason and his exit has tremendous implications for the Red Bulls, as they no longer have the type of fearless, energetic, and rangy presence in the center of the park that was so vital to their high press.

Filling that void will not be easy, even with Sean Davis present, but it is up to head coach Chris Armas to find a way to make it work. He could try to go for as close to a like-for-like replacement as he has in his repertoire (Cristian Casseres Jr. has been mentioned by club officials) or he could try to tweak the tactics to play to the current crop of players’ strengths. There is no obvious answer but Armas will have to come up with a solution in order to keep his side amongst the elites in the league.

“The biggest question mark is always going to start with and end with how we replace Tyler,” said Robles. “Tyler was great for us last year and one of the biggest advantages about having a player like him is how he covers so much ground. You look at his GPS numbers and it’s crazy.”

Another major task the second-year coach has is to get Kaku back to playing his his best. The attacking midfielder was a remarkable addition to the Red Bulls and an assists machine during the first half of the 2018 campaign, but his impressive statistical contributions dropped off significantly after July when opposing teams became more familiar with his strengths and how to defend him. Armas has to figure out how to get Kaku firing on all cylinders again in order for the attack to kick things up a notch, especially during the opening months of the season before Kaku’s likely departure for the Copa America in June and a potential transfer later in the summer.

The other position that brings with it a good share of uncertainty is the right midfield spot. The tireless but limited Alex Muyl ended the season by getting the nod there in each of the club’s four playoff matches but continued to be inconsistent with his end product. Since the club somewhat surprisingly did not upgrade this position, however, Muyl could very well be the go-to starter there again unless someone like Florian Valot can step up to displace him.

There is not as much to worry about in other parts of the field, especially at the back. Returning to the Red Bulls are stalwart goalkeeper Luis Robles and all four members of the impressive defense that surrendered a league-low 33 goals last season, including stout centerback tandem Aaron Long and Tim Parker. Throw in the marauding duo of Michael Murillo and Kemar Lawrence in the fullback spots and New York should once again be dominant in the defensive third, so long as the six players in front keep doing a good job of employing the vaunted press.

“The real crux of our mentality hasn’t changed, our philosophy hasn’t changed,” said Robles. “High press, win the ball up the field, play forward, gain as many opportunities on goal as possible, maintain a high line.”

On the other end of the field, the Red Bulls will count on both of their top two scorers from each of the past two seasons to lead the way once again. Reliable star striker Bradley Wright-Phillips and left midfielder Daniel Royer scored a combined 31 goals last year (two more than their output in 2017) and have not shown any reason to doubt their ability to put up similar numbers this season.

Still, it is inevitable that Wright-Phillips, who will turn 34-years old on March 12, will slow down at some point. Wright-Phillips’s goal-scoring exploits have been synonymous with the Red Bulls’ success for the past half-decade, so any dip in his production is sure to affect them. The club seems to be preparing for that with the introduction of offseason acquisition Mathias Jorgensen, but the up-and-coming Danish forward is unlikely to be ready for a full-time role just yet so another really strong campaign from Wright-Phillips might be needed.

With Concacaf Champions League, U.S. Open Cup, and MLS matches all on the agenda, depth will also play a pivotal part in determining just how much success the Red Bulls have. The good news is that young role players like Derrick Etienne and Ben Mines are a year older, and others like Kyle Duncan and Vincent Bezecourt are healthy again and ready to be back in the mix as the Red Bulls try to contend yet again for more silverware in 2019.

“Win everything,” said Robles. “I know that sounds so generic but the philosophy here is to win everything and though we may come up short it doesn’t deter us. We’re going to be persistent in our pursuits, there’s a perseverance within our mentality.