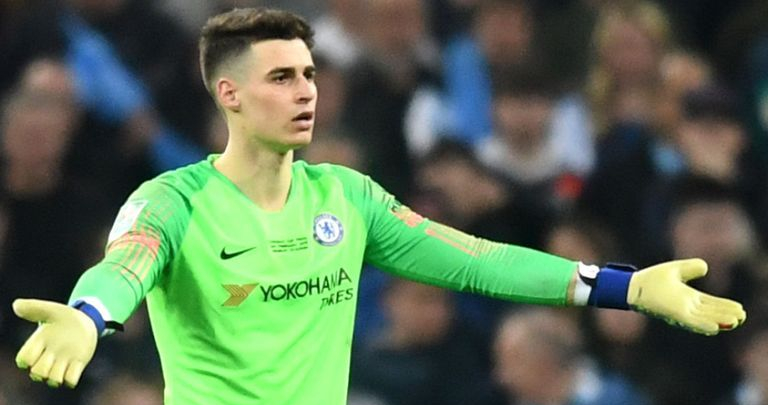 Maurizio Sarri suffered his first cup final loss with Chelsea after the Blues fell 4-3 in a penalty shootout of the EFL Cup at Wembley Stadium.

Prior to the start of the shootout, Sarri planned on substituting off goalkeeper Kepa Arrizabalaga but the Spaniard disregarded his boss’ wishes and remained on the pitch.

Sarri was livid on the sidelines after his keeper remained on the pitch but admitted after the match that it was a misunderstanding. (REPORT)

Jose Mourinho eyes a return to coaching in June after being sacked by Manchester United earlier this season. (REPORT)

Liverpool dropped points on Sunday after being held to a scoreless draw at Manchester United. (REPORT)

Arsenal jumped back into the top four with a 2-0 home success over Southampton. (REPORT)

Current Celtic manager Brendan Rodgers played down a return to the Premier League after being linked to Leicester City. (REPORT)

Pep Guardiola admitted Aymeric Laporte and Fernandinho are both out for weeks after suffering injuries in Sunday’s EFL Cup. (REPORT)

Alvaro Morata is relieved to end his recent goal drought after scoring in Atletico Madrid’s 2-0 victory over Villarreal. (REPORT)

The Philadelphia Union will look to build off of their best season in club history. (READ)

After hiring a new manager and adding some new players, the San Jose Earthquakes will look to bounce back in 2019. (READ)

C.J. Sapong was traded to the Chicago Fire on Saturday for up to $450,000 in Allocation Money. (READ)

Andrew Wooten bagged his eighth league goal of the season for Sandhausen. (READ)