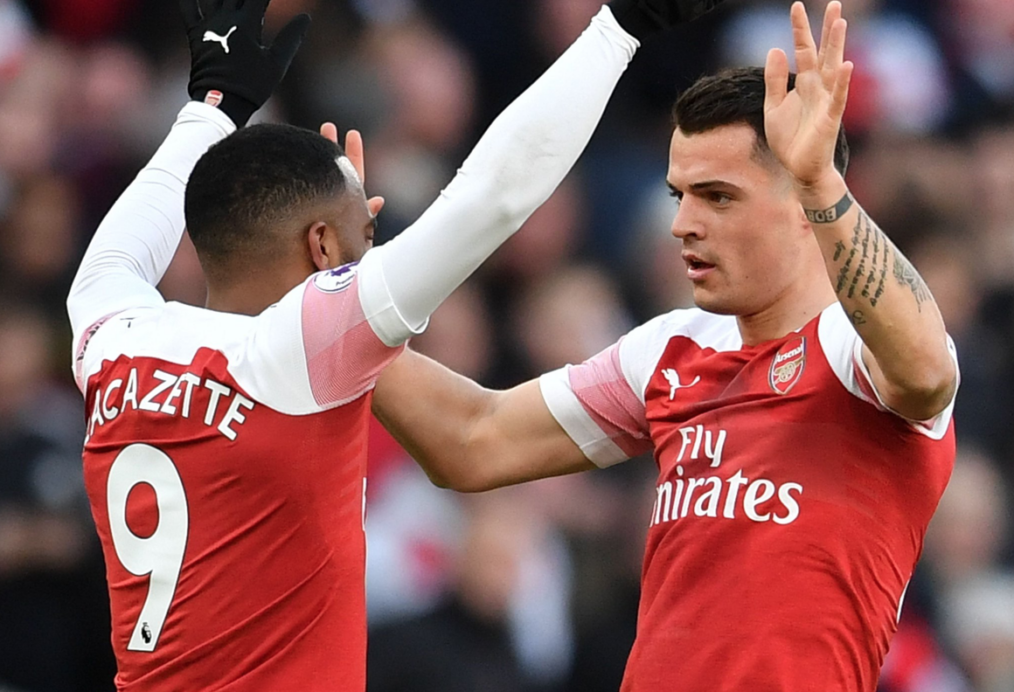 Arsenal’s win over Manchester United at Emirates Stadium this weekend allowed the Gunners to move ahead of the Red Devils in the Premier League table.

Unai Emery’s men used a pair of goals scored on either side of the halftime whistle to seal the victory.

The first goal came in the 12th minute as Granit Xhaka’s swerving effort from long range wrongfooted David De Gea and found the back of the net. Pierre-Emerick Aubameyang made it 2-0 in the 69th minute as he converted a penalty kick.

Bayern Munich also picked up all three points this weekend in convincing fashion. The current champions scored six times against Wolfsburg placing them atop the Bundesliga table.

Robert Lewandowski was the only player to pick up multiple goals as Bayern used five goalscorers on the day. Serge Gnabry opened up the scoring in the 34th minute while James Rodriguez, Thomas Müller, and Joshua Kimmich also found their name on the scoresheet.

Manchester City’s 3-1 win over Watford allowed for the Cityzens to remain at the top if the Premier League table. Raheem Sterling picked up a pair up all three goals in less than a quarter of an hour in Saturday’s affair.

Liverpool also picked up three points keeping things interesting at the top of the league. Roberto Firmino and Sadio Mane each bagged braces in the 4-2 win over Burnley.

Elsewhere, Chelsea split the points with Wolverhampton Wanderers thanks to a late Eden Hazard goal, and Tottenham conceded the last two goals of the game in a 2-1 loss to Southampton.

Here are all of this weekend’s Premier League results:

The usual suspects were on the scoresheet for Barcelona on Saturday as Luis Suarez and Lionel Messi each bagged a goal for the club after Gerard Pique’s opener against Rayo Vallecano in a 3-1 win.

Here are all of this weekend’s La Liga results:

Borussia Dortmund used late substitute Christian Pulisic to pick up all three points over VfB Stuttgart. The American grabbed the game-winning assist in the 84th minute before sealing the win with a goal of his own in stoppage time.

Elsewhere, Bayer Leverkusen downed Hannover 96 in an exciting 3-2 match. Werder Bremen opened this weekend’s matches with a 4-2 win over Schalke 04.

Here are all of this weekend’s Bundesliga results:

Juventus featured in the first match of the weekend in Italy’s top flight as Massimiliano Allegri’s men topped Udinese 4-1. 19-year-old Moise Kean scored the opening two goals for the club before Emre Can slotted home a penalty kick and Blaise Matuidi added a fourth.

Napoli was forced to settle for a draw against Sassuolo with the clubs each scoring a goal while Inter managed to grab three points with a 2-0 win over SPAL.

Here are all of this weekend’s Serie A results:

Mario Balotelli scored the game’s lone goal against his former club on Sunday as Marseille picked up three points over Nice. Rennes also bagged a trio of points with a 3-1 win over Caen.

Olympique Lyonnais split the points with Strasbourg thanks to a brace from Mousa Dembele. Monaco also picked up just a single point this weekend as they hosted Bordeaux in a 1-1 draw.

Here are all of this weekend’s Ligue 1 results: