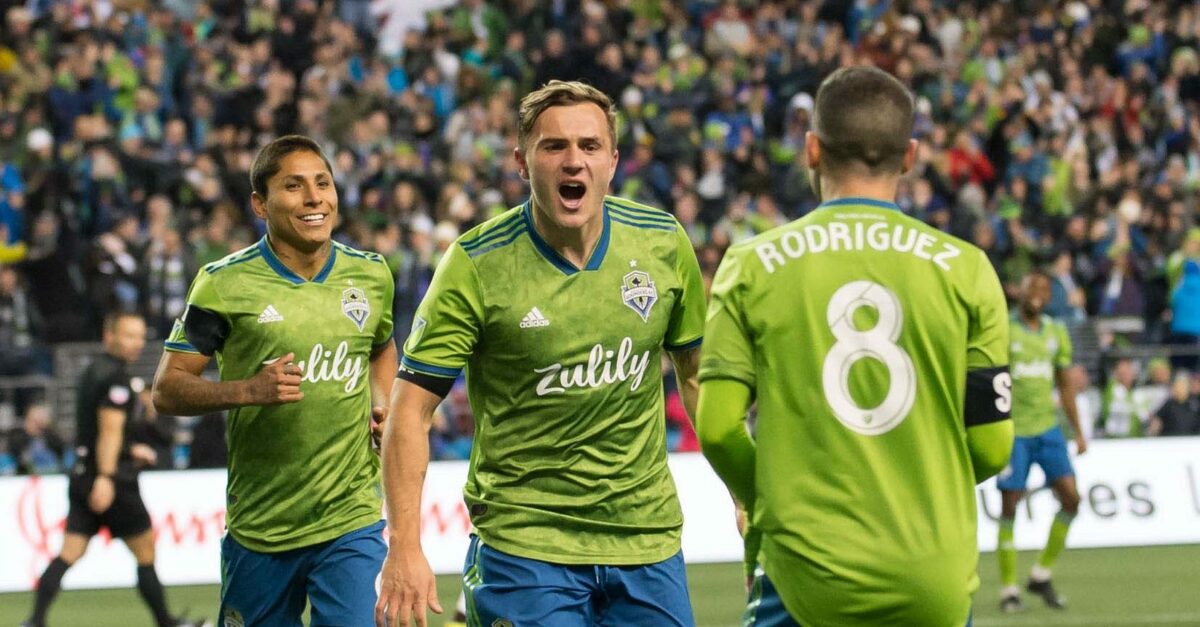 The 2019 MLS season is finally here as 24 teams gear up for lengthy campaign in hopes to be crowned MLS Cup Champions this December.

Michael Bradley has the top individual performance of the day so far. He scored twice for Toronto FC as they went to Philadelphia and dismantled the Union 3-1. Orlando City also had an impressive comeback at home to draw New York City FC 2-2.

In Colorado, a blizzard couldn’t stop the 10-man Rapids from grabbing a late draw against the Portland Timbers. Zlatan Ibrahimovic had a winner for the LA Galaxy as well.

Jordan Morris returned from a season off after knee surgery and scored a brace in Seattle’s big win on opening night against newcomer FC Cincinnati.

Toronto FC rebounded from their Concacaf Champions League exit with their first win of the 2019 MLS season on Saturday. Michael Bradley scored a goal in each half to help Greg Vanney’s side to a 3-1 win over the Philadelphia Union.

Jonathan Osorio had the best chance to break the deadlock but was denied by Andre Blake from the penalty spot after 34 minutes. Kai Wagner was the guilty party after being whistled for handball on the endline. Bradley handed TFC a halftime lead as he was left wide open inside of the 18-yard box and Auro picked him out perfectly.

Bradley was amongst the goals again in the 62nd minute as he finished nicely from a rebound at the top of the box. Marco Fabian scored his first MLS goal in the 72nd minute from the penalty spot after Osorio was whistled for handball.

Regardless, TFC would hang on for their first three points of the season while the Union dropped their home opener.

New York City FC scored twice in the first half, but failed to hold the lead. Ebenezer Ofori opened the scoring 13 minutes in and Alexander Ring doubled the lead just before halftime, but that would be all the good news NYCFC had on the day.

Orlando’s comeback began just before the hour mark when Chris Mueller pulled on back for the Lions. The equalizer came in the 75th with a wonderful play from Dom Dwyer, who had just come on as a sub. He picked out a streaking Tesho Akindele, who slid the ball into the empty net. Orlando thought they had a penalty late in the match when a Dwyer header hit an NYCFC defender’s arm, but VAR ruled it unintentional and no spot kick was awarded.

Caleb Porter’s tenure as Crew head coach didn’t get off to the best start. It took all of six minutes for his defense to concede a goal thanks to Andreas Ivan’s header off a Florian Valot cross. The Crew were able to pick themselves up from the early setback to get back on the level by halftime. Federico Higuain swing a corner in to Gaston Sauro in the 41st minute to make it a 1-1 game.

That would be it for the goal scoring despite the Red Bulls taking ten shots in the second half. They thought they had the winner in the 76th when Ivan tapped a shot in from the doorstep, but he was ruled offside and he would have to be satisfied with just one goal on the day.

Michael Barrios scored and impressive opening goal for FC Dallas. He ran through most of the New England defense from the halfway line after taking a touch from Dominique Badji before placing a perfect shot into the back of the net in the 13th minute.

Dallas was able to hold the lead through halftime despite many New England chances. Carles Gil’s first MLS goal produced a Revolution equalizer in the 57th minute when he was in the right place at the right time to knock home a headed assist from Antonio Mlinar Delamea. The two sides combined for one shot on target after that and the points ended up shared.

Mauro Manotas stayed hot with his fourth goal in all competitions so far this season. His 62nd minute goal cancelled Albert Rusnak’s 40th minute opener as RSL found themselves in control for most of the match.

Things looked good for the visitors in the 81st minute when Houston defender Matias Vera was sent off for a second yellow on a hard foul. Salt Lake failed to take advantage of the extra man, however. They produced only two shots after the sending off and couldn’t break the 1-1 deadlock.

The winter wonderland of Dick’s Sporting Goods Park produced plenty of goals. Kei Kamara scored his first Rapids goal in the 16th minute, but the lead would be fairly short lived thanks to a bizarre situation in the 26th minute. Axel Sjoberg was sent off after VAR penalized him for handball in the penalty area. Diego Valeri saw his penalty saved, but he followed the shot up and tapped in to tie it.

Sebastian Blanco would get a slighted touch to a Valeri corner just before the halftime whistle, but Colorado pulled level right after the restart through Benny Feilhaber. The Timbers would control much of the rest of the second half however and an own goal looked to provide the win. In the 66th minute, Deklan Wynne slid to block an Andy Polo cross and he accidentally knocked it past Tim Howard. However, University of Denver product Andre Shinyashiki had other plans. He tapped in a loose ball on the doorstep in the 94th minute to earn an unlikely draw in the show for the short handed Rapids.

Erik Godoy got Vancouver in front after only six minutes, but Minnesota United would be in control for much of the rest of the game. Darwin Quintero scored from the spot to tie it in the 37th, then a quick two goals late in the second half allowed the Loons to pull away.

Francisco Calvo headed home a Quintero feed in the 66th to put them in front and Romario Ibarra scored five minutes later to double the advantage. Doneil Henry pulled one back for the Whitecaps in the 81st minute, but it wasn’t enough to salvage a result for the home team on opening night.

There wasn’t much to discuss from the first half, but the LA Galaxy defense made sure there was a talking point early on in the second. Defender Diego Polenta played a horrendous back pass in the 50th minute that came right to C.J. Sapong. The new Fire forward collected the error, rounded David Bingham, and slotted into the empty net for the opening goal.

The Galaxy would weather a few more Fire chances, including a rocket off the post from Przemyslaw Frankowski, but they managed to equalize thanks to the efforts of a teenager. In the 68th minute, 16-year-old midfielder Efrain Alvarez created space for himself before picking out Daniel Steres in the box for a perfect header that found the back of the net. The game really came alive after that and Zlatan Ibrahimovic nearly equalized off his shoulder a couple minutes later, but he was robbed by David Ousted.

The Galaxy winner came from the only possible source. Ibrahimovic was there to clean up Chris Pontius’s shot off the crossbar in the 80th minute to send the home fans home happy.

Leonardo Bertone fired a rocket past Seattle keeper Stefan Frei to open the scoring, and to grab FC Cincinnati’s first goal in MLS, but a goal by Kevin Leerdamoff of a deflected save by Cincy keeper Przemyslaw Tyton and a brace by Jordan Morris in his return to play after knee surgery helped the Sounders explode to a 3-1 halftime lead.

Cincinnati created a few chances, one of which coming on a free kick by Bertone at the hour mark, but Bertone made the save. Raul Ruidiaz extended Seattle’s lead late in the game, scoring in the 87th minute to put the Sounders up 4-1.

The Matias Almeyda era in San Jose started with a bang as Magnus Eriksson opened his and the Quakes’ tally on his early goal, but it wouldn’t be enough as Ignacio Piatti and Saphir Taider beat the San Jose backline to put the Impact up 2-1 at the half.

Taider nearly put Montreal up 3-1 in the second half with San Jose goalkeeper Daniel Vega away from his net, but he fired his shot high. San Jose had several chances to pull even, highlighted by a late cross from Cristian Espinoza to Chris Wondolowski in front of goal, but Wondolowski couldn’t get a solid foot on the shot.

The loss for San Jose marks their first on Opening Night since Avaya Stadium opened in 2015, and their winless streak extends to nine matches dating back to last year.