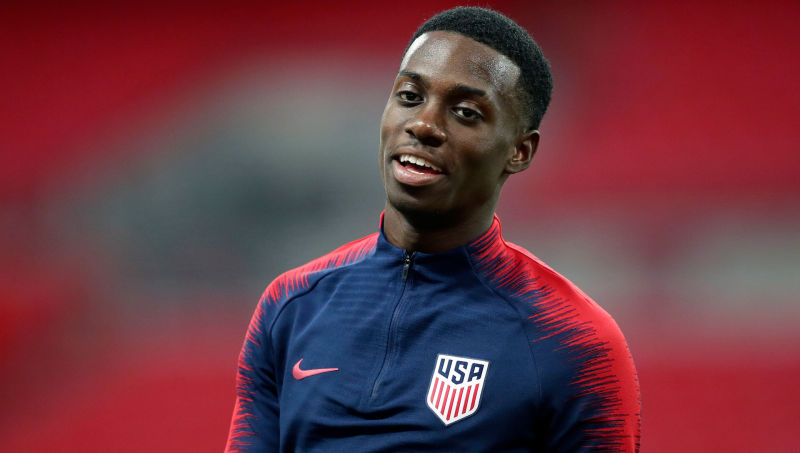 The 2020 Olympics are currently 19 months away and for U.S. Soccer the goal will be to prepare a team to qualify for it.

After not qualifying for either of the last two tournaments, the U.S. will have an opportunity to not only prepare for a top international competition, but continue to give young players the chance to develop.

U.S. Men’s National Team head coach Gregg Berhalter stated in Tuesday’s conference call that several players who were not called up for the March friendlies will be eligible for the U-23s.

Timothy Weah, Josh Sargent, and Antonee Robinson are three examples of players who earned caps in 2018 but were not called in to Berhalter’s March camp.

Several other European-based and MLS-based players will be considered with a camp being expected to happen later this year.

Here’s a look at what the first U-23 roster could be taking into consideration players ages by November 2020:

With Zack Steffen and Ethan Horvath being the top pair for the senior team, Jonathan Klinsmann can use this role to grow as an international player. Appearing regularly for Hertha Berlin’s U-23 team, Klinsmann can look to translate that over to the U.S. U-23’s but also help groom younger keepers like Brady Scott and David Ochoa.

With plenty of veteran defenders available for the senior roster, Cameron Carter-Vickers, Antonee Robinson, and Shaq Moore will be the headliners of this group. All three earned caps in 2018 and are continuing their development at club level abroad, but still could use some fine-tuning against tougher competition.

Erik Palmer-Brown is fighting for first-team minutes at NAC Breda, while Chris Gloster is appearing for Hannover II regularly. Brooks Lennon is a player that will find it tough to get back into the USMNT fold with DeAndre Yedlin and Nick Lima ahead of him on the pecking order.

Justen Glad has played for the U-20’s in the past and is a player that has shined for RSL. Auston Trusty is a face for the future of the USMNT in the backline, but needs to gain more experience with the U-23s in order to truly make an impact with the senior group.

Even though Christian Pulisic, Weston McKennie, and Tyler Adams meet the age requirement there isn’t any realistic way they drop down to this team. There may not be plenty of players with U.S. Youth National Team experience here, but all of them can bring something different to the table.

Djordje Mihailovic needs international minutes in order to get himself familiar with what is expected at this level. He shined in the January camp, but with many European-based players coming in, it will be hard for him to earn a spot once competitive matches come along.

Brooks Lennon is a regular in MLS and is versatile enough to play on the outside of midfield. Anthony Fontana may find it tough to get noticed for the senior team, but if he is productive then it will put him in a good situation. Luca De La Torre and Jonathan Amon are talented creative players who deserve opportunities to showcase what they can bring.

Like Amon, Emmanuel Sabbi fights for time domestically in Denmark’s Superligaen. He has provided goals at times for Hobro, but really hasn’t been tested at this level with the U.S.

Josh Sargent and Timothy Weah were named by Gregg Berhalter as players who will see time at this level. Despite scoring for their European clubs, both players still are developing in some areas and would benefit greatly from the playing time.

Both have scored for the USMNT, but are lacking consistent starts with Werder Bremen and Celtic respectively. Long-term this would benefit both parties as Sargent and Weah will be looked at in the future by Berhalter.

Haji Wright is a forgotten man in some ways but can be included back into the U.S. fold in this camp. The 20-year-old appeared for Schalke’s first-team earlier in the season but since has dropped into the reserves. He adds physicality to the attacking front and could work well with the other versatile forwards in the group.

Sebastian Soto has racked up goals with Hannover’s U-19 side and recently trained with the senior group. This would be the next step in his development but will be a major jump in competition. Regardless, he deserves a shot to show what he can do and what better time than now.