Red Bulls have mountain to climb after falling in home leg vs. Santos Laguna 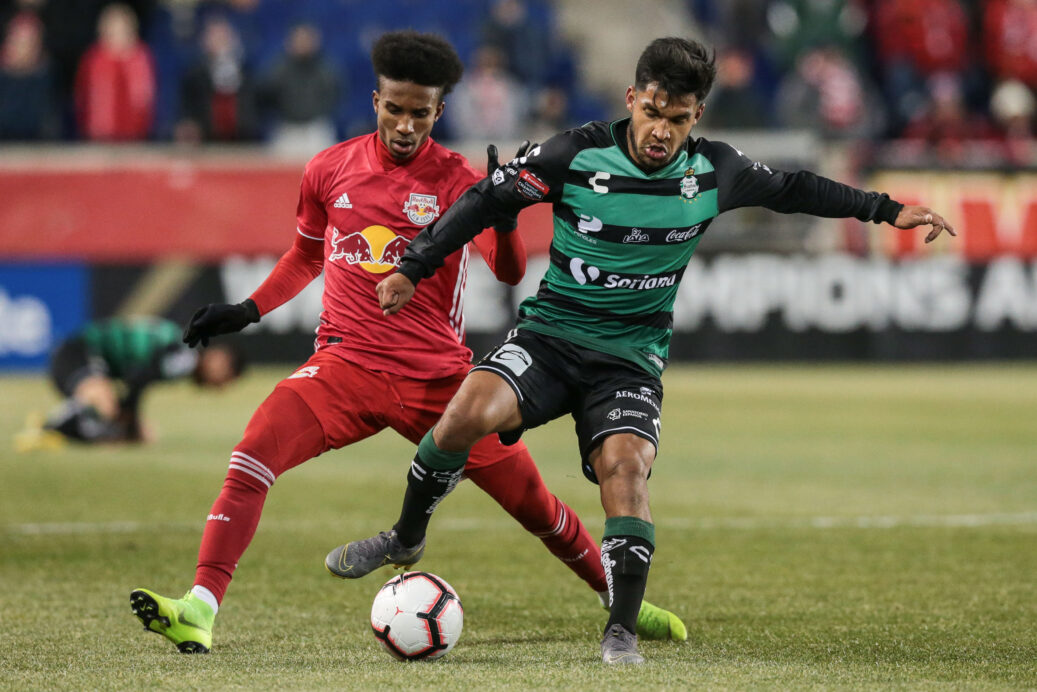 HARRISON, N.J. —Subpar finishing, moments of poor defending, and a couple of quality attacking moments from the opposition.

The New York Red Bulls were outdone by all of those factors, and now have a huge mountain to climb.

A resolute Santos Laguna side handed the Red Bulls a home loss in the first leg of their Concacaf Champions League quarterfinals series on Tuesday night. While losing at Red Bull Arena was always going to be a bad enough start for the MLS club, what made things even worse was that the Red Bulls conceded two away goals while failing to score themselves.

That they did not find the back of the net was a major source of frustration for the Red Bulls. Chris Armas’ team finished with 14 shots, six of which were on target, but stellar goalkeeping from Santos goalkeeper Jonathan Orozco combined with shoddy finishing from the likes of Bradley Wright-Phillips saw the Red Bulls get shutout.

“We created a bunch of chances,” said Armas. “Brad had a couple, Connor Lade has a big chance, Derrick Etienne gets a good chance. (Andreas Ivan, too). There were set pieces. Each guy had a couple of good looks there. There might have been 5-8 really good looks.

“If we get one or two of those, it’s a different game.”

It was not just a failure to take their chances that cost the Red Bulls dearly. Goals on both sides of halftime doomed them, with some uncharacteristic defensive mistakes allowing Santos Laguna to get good looks on goal that it capitalized on.

The Red Bulls tried to squeeze Santos on the flank, but Royer didn’t get over on his assignment and Long got turned by Valdes’ fake. #RBNY #CCL #MLS pic.twitter.com/405opX3fQG

Tim Parker gets sucked out wide, Kyle Duncan follows the runnner to the middle and they never were able to switch back. Result = a ball-watching Parker and easy goal for Santos. 2-0, Santos.#RBNY #CCL #MLS
pic.twitter.com/HounZJYwPT

The Liga MX side, of course, deserves credit for the finishes, too. On top of producing a neat dribbling move on the first and brilliant pass on the second, Santos also game-planned well to beat the Red Bulls’ touted high press by playing long into the attacking half. There, the two center forwards, Julio Furch and Javier Correa, could bring the ball down and initiate sequences in more advanced and dangerous positions.

“We looked to try and get our forwards in 1-on-1 situations with their centerbacks,” said Santos head coach Salvador Luis Reyes. “It was important because with our forwards we had the possibility of bringing the ball down and begin to weave passing sequences in their half.”

For the Red Bulls, their overall performance was still good enough to give them confidence going into the second leg next week. They believe they will once again be able to create chances against Santos down in Mexico, and that they will be more clinical than they were at Red Bull Arena.

That said, the Red Bulls and Santos Laguna will not be playing on even terms like they were on Tuesday. Santos hold a healthy advantage after its victorious first leg, and the onus will be on the Red Bulls to push and search for the two goals they need.

“We’ll go about it is intelligently,” said Armas. “Having balance to our attacks. Like tonight, one of the messages at halftime and can’t just start throwing everyone forward, including both outside backs. We have to have balance and a calculated approach.

“Certainly the game won’t be won in the first 20 minutes from us, but it can be lost. We’ll have to be smart how we go about it, but I think we’ll have to remain aggressive, too. That’s who we are and we’ll go there calculated, one goal at a time. “