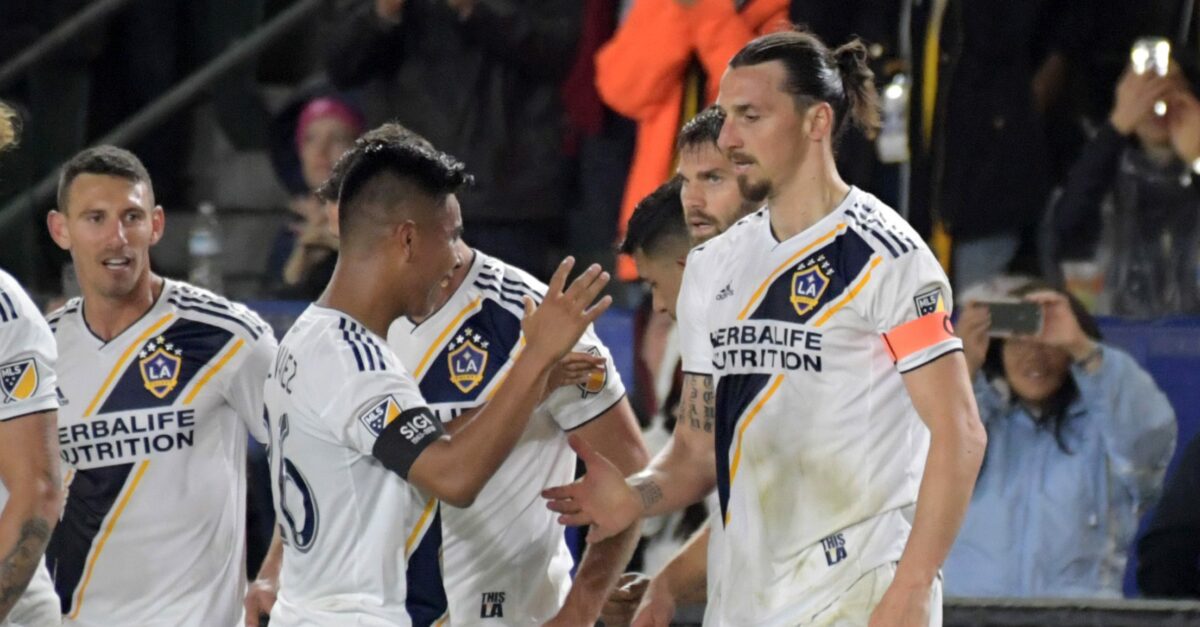 The LA Galaxy have themselves a new teenager to freak out over after Saturday night’s 2-1 win over the Chicago Fire.

Midfielder Efrain Alvarez is just 16-years-old, but he already has a big assist to his name. Eight minutes after coming off the bench, Alvarez showed some nice footwork in the Fire penalty area before firing a perfect cross to the head of Daniel Steres for the tying goal.

He also played a part in the winner and would have had a second assist if Chris Pontius’s shot had been a couple of inches lower. He collected a throw-in and laid the ball off on the first touch to Pontius, who blasted a shot off the bottom of the crossbar and right to Zlatan Ibrahimovic, who provided the easy finish.

“Both goals were all the team’s contribution,” Alvarez said on the field after the match. “It wasn’t just my fault that they happened.”

In addition to those two key plays, he was trusted with corner taking duties after he came in and was an efficient passer along the right flank.

Alvarez has a brief history of setting youngest player records. He became the youngest player to sign a USL contract in August 2017 when he inked a professional deal with LA Galaxy II just a month and a half after his 15th birthday. He then proceeded to score 12 times in just 17 appearances with Los Dos on his way to winning the league’s Young Player of the Year Award.

He didn’t make his senior team debut until Saturday night, however, when he became the youngest player to appear in an MLS game for LA. Even after only a half hour of action, he earned the praise of Ibrahimovic, who’s more than twice Alvarez’s age.

“He’s full of confidence. But, he’s only 16-years-old, you forget his age,” Ibrahimovic said after the game. “I said yesterday when I was talking to the media, I think he’s the best talent in MLS by far. The club, the team, the coach have to take care of him in the right way. He needs to work hard. He needs to focus and don’t lose the focus because of the hype, just continue to work. The [club] can help him a lot just like the team because he’s young, he’s talented and it’s easy to lose focus. He’s a good kid. He works hard and he listens.”

While he was one of the stars from Saturday’s comeback, he doesn’t exactly figure in the Galaxy’s season plans. He’s a valuable bench piece at the moment, but the team was missing several key midfield players. Sebastian Lletget, Perry Kitchen, and Juninho were all out injured and if even one of them is healthy, Alvarez probably doesn’t see the field.

But a kid like him has to take the chances when they come, and he certainly did that with his substitute appearance on Saturday, when coach Guillermo Barros Schelotto put a lot of trust in him.

“Honestly, he gives that trust to everyone,not just me,” he said. “I just have to take advantage of it.”

Internationally, the natural reaction is to wonder what this kid from Los Angeles could do for the U.S. Men’s National Team one day. Well, he needs to switch national allegiances before such dreams can come true. He currently represents Mexico at the youth level, but he remains open to a switch to the United States in the future.

“I’m not closing the door on anyone. I could still play for the U.S. or I could keep playing for Mexico. But I’m with Mexico right now and that’s my focus,” Alvarez said last summer before the MLS Homegrown Game.