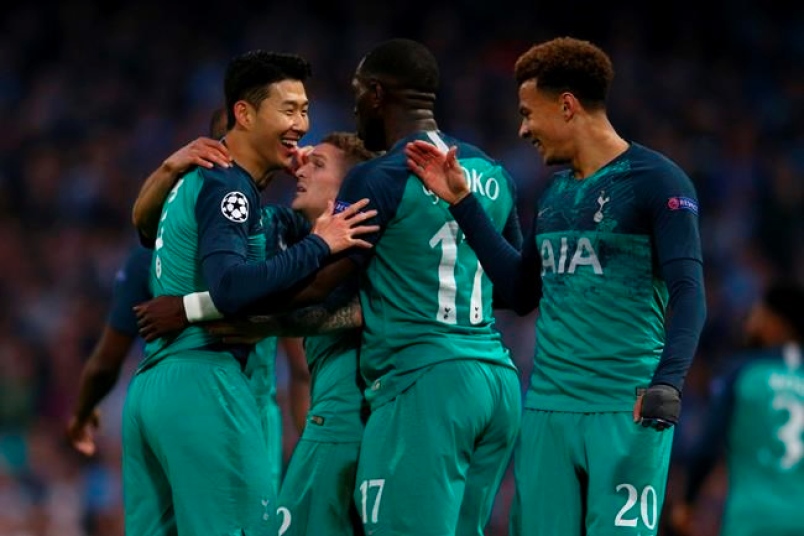 Pep Guardiola’s team was ousted in the UEFA Champions League quarterfinals by Spurs on Wednesday with Tottenham advancing via the away goals tiebreaker. Raheem Sterling bagged a brace at the Etihad while Son Heung-Min also scored twice in the second leg. With Harry Kane out, Fernando Llorente could get the start up top after scoring the eventual game-winning goal four three days prior. A win for Manchester City boosts them to top spot in the Premier League ahead of Liverpool’s trip to Cardiff on Sunday.

Elsewhere, Inter Milan takes on AS Roma while Fiorentina travels to Juventus. Borussia Dortmund faces a trip to Freiburg on Sunday while Bayern Munich takes on Werder Bremen a day prior. PSG can finally clinch the Ligue 1 title if they defeat Monaco on Sunday. Barcelona welcomes Real Sociedad to the Camp Nou on Saturday.

Liverpool face a trip to Cardiff City knowing they can remain in the title race with all three points. Jurgen Klopp’s side also advanced into the UCL semifinals after a 6-1 aggregate win over FC Porto. Sadio Mane, Roberto Firmino, and Mo Salah all scored in Wednesday’s second leg which now sets the Reds up against Barcelona in the next round.

Cardiff picked up a huge three points midweek with a 2-0 road win over Brighton & Hove Albion on Tuesday. Neil Warnock’s side sit two points behind the Seagulls in the bottom four, with only four matches remaining. Nathaniel Mendez-Laing and Sean Morrison each found the back of the net in midweek.

La Liga leaders Barcelona face a decently tough test at home on Saturday against Real Sociedad. Ernesto Valverde’s men advanced into the UCL semifinals after breezing past Manchester United in Tuesday’s second leg win. Lionel Messi now has 45 goals in all competitions this season, while also chipping in 17 assists.

Sociedad are sitting in 10th place but have failed to pick up a win in either of the last two matches. A 1-1 draw against Eibar last weekend saw an early strike from Juanmi canceled out in the final moments as Sociedad had to settle for a point. Mikel Oyarzabal and Willian Jose have combined for 22 goals this league season and will be eager to spark Sociedad to an upset win.

Atletico Madrid remains in the La Liga title race but will need to win and hope Barcelona slip up over the next few weeks. Diego Simeone’s side travels to Eibar this weekend looking to make it back-to-back league triumphs. A 2-0 win over Celta Vigo saw Antoine Griezmann and Alvaro Morata each net goals. Griezmann is the marquee name for Atletico, scoring 20 goals and adding 11 assists in all competitions.

Eibar have failed to win in their last two matches, but they did fight back for a 1-1 draw at Real Sociedad last weekend. Brazilian forward Charles is the main man up top with 14 goals in all competitions. These sides drew 1-1 back in September.

The Bundesliga title race resumes this weekend with Bayern Munich facing the tougher opponent on Saturday. Bayern kicks off the day’s action as they welcome Werder Bremen to the Allianz Arena. Niko Kovac’s side will face Bremen two times in the next four days as they also meet in the German DFB Pokal semifinals next week. Robert Lewandowski is the lone double-digit goalscorer for Bayern so far this season with 21.

Werder Bremen are in seventh place and have not lost a league match since Dec. 22nd. Their 14-match unbeaten streak will be put to the test in Munich this weekend, but Max Kruse (10 goals) and Milot Rashica (eight goals) will headline the attack. Bayern defeated Bremen 2-1 back in December.

Second place Borussia Dortmund faces a trip to Freiburg on Sunday, needing points to remain close with Bayern. Jadon Sancho put in a strong performance last weekend with a brace against Fortuna Dusseldorf. The 19-year-old has 10 league goals this season and will need to play a major role if Dortmund wants to lift the league title.

Freiburg are winless in their last four matches, losing to Mainz and Werder Bremen respectively. The hosts will need to make it tough for Dortmund if they want to earn some points from this match. Gian-Luca Waldschmidt has eight goals this season, which leads the team while Lucas Holer has four.

The marquee match in Italy this weekend sees Inter Milan welcome AS Roma to the San Siro on Saturday. The hosts currently hold a six-point lead over Roma for third place in the league standings. Inter will rely heavily on the duo of Mauro Icardi and Ivan Perisic, who have 16 goals between them this campaign.

Roma are unbeaten in their last three matches, defeating Sampdoria and Udinese in their last two. Edin Dzeko played the hero for Roma last weekend, scoring the lone goal in a 1-0 triumph at the Olimpico. The Bosnian only has eight league goals this season which is a step down of his usual haul. These sides played out a 2-2 draw in December in Rome.

Juventus can clinch the Serie A title officially if they can defeat Fiorentina on Saturday. The Old Lady will also try to bounce back after being eliminated from the UEFA Champions League to Ajax midweek. Cristiano Ronaldo scored the lone goal against the Eredivisie side on Tuesday, and has 19 league goals in 26 matches this season.

Fiorentina has not won a league match since Feb. 17th, going winless in their last nine overall. A 0-0 draw against Bologna last time out was Fiorentina’s third tie in the last four matches. Marco Benassi has seven league goals this season but has not found the back of the net since Jan. 27th.

After failing to clinch the Ligue 1 title in their last three matches, PSG has another opportunity on Sunday at home against Monaco. Thomas Tuchel’s team were hammered 5-1 last weekend by Lille before losing 3-2 to Nantes in midweek action. Kylian Mbappe has 27 league goals this campaign, picking up production due to Edinson Cavani and Neymar’s respective injuries.

Monaco’s disappointing season continues as they are seven points clear of the bottom three. Leonardo Jardim returned as manager earlier this season and has at least helped lift the team up the standings somewhat. Back-to-back draw against Guingamp and Stade Reims respectively have helped Monaco bounce back from a March 31st loss against Caen. Radamel Falcao has 12 goals for Monaco and has been the lone bright spot this season.