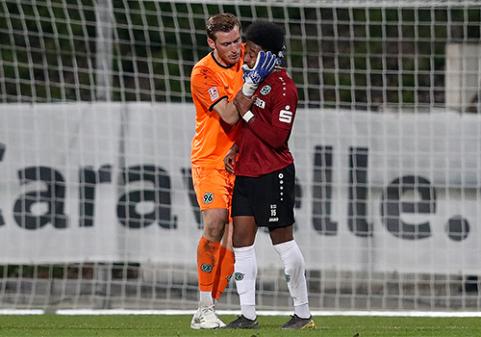 11 days after winger Duane Holmes was subjected to racial abuse in England, another American player has has received abuse in Europe.

Hannover U-23 defender Chris Gloster is the latest player to receive racial abuse, during a 1-1 draw against VfB Lubeck on Wednesday.

The Bundesliga club made the announcement on Thursday after roughly 200 Lubeck fans insulted the 19-year-old. Gloster received monkey chants from the fans during the match.

“Chris sat in the dressing room with tears in his eyes and he couldn’t believe it,” Hannover academy director Michael Tarnat said in the statement. “He was insulted severely and continually during the match.

“Of course, a young lad like him can’t just swallow it like that. It exceeded tolerable limits and that’s why we decided to report the incident to the FA.”

Hannover and their players showed their support for the U.S. U-20 Men’s National Team defender via social media.

Gloster and Hannover II are next in action on April 28th against Holstein II.