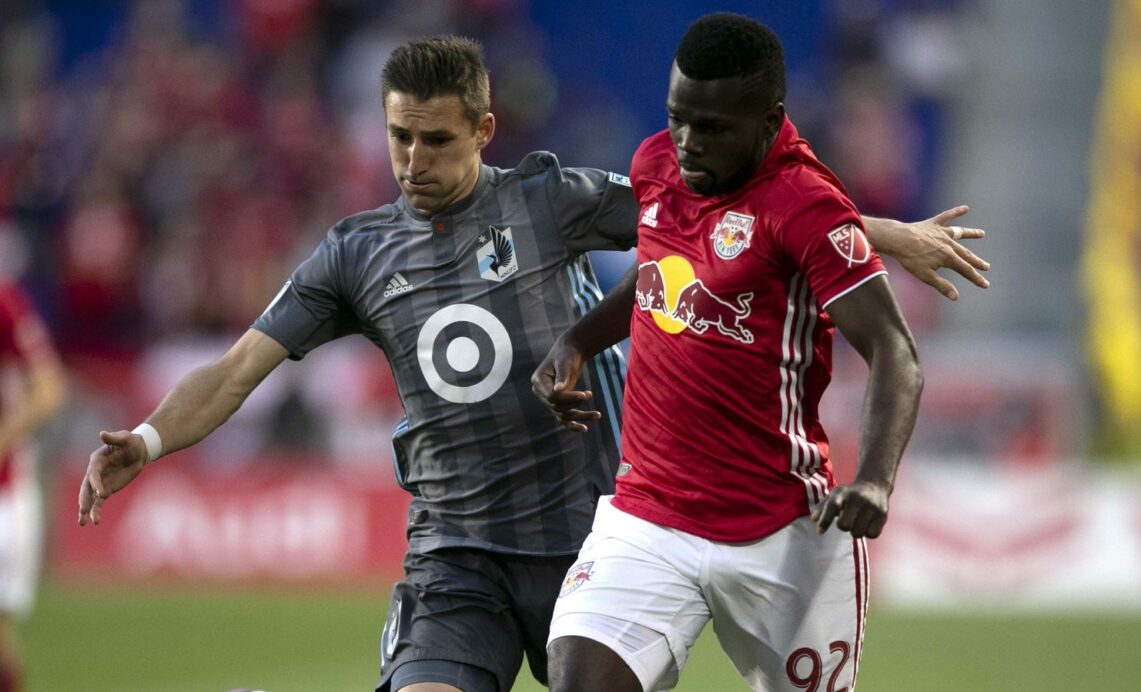 Abu Danladi and Romario Ibarra scored for the winners who bounced back from a loss in New England a week ago. Despite a first MLS goal for Cristian Casseres, the Red Bulls fell once again at RBA.

Los Angeles FC left no doubt about which team is the best in Major League Soccer at the moment after its demolition of D.C. United on Saturday. Diego Rossi and Carlos Vela led LAFC to a comfortable 4-0 romp to hand D.C. its first loss of 2019, and leave LAFC atop the MLS standings.

Toronto FC saw its perfect record tainted on Saturday after having to settle for a draw against the Chicago Fire. Jozy Altidore’s excellent performance wasn’t enough to help TFC secure a fourth straight win.

NYCFC fell short in its bid for its first win of 2019, settling for a draw against the Montreal Impact, which overcome the absence of Ignacio Piatti and red card ejection of Maxi Urruti to secure a road point.

NYCFC couldn’t take advantage of the absence of Ignacio Piatti, or a Maxi Urruti red card, settling for a draw against the Impact at Yankee Stadium.

Evan Bush made four saves to preserve the shutout. Sean Johnson made one save for NYCFC.

The Uruguayan winger terrorized D.C. United’s backline for most of the match, helping his side to a 4-0 road win.

Carlos Vela’s 17th-minute finish gave Los Angeles the opening goal, then Vela set up a Rossi finish in the 27th minute to give LAFC a commanding lead. Rossi then made the score 3-0 after racing onto a Mark Anthony Kaye pass and striking a curling right-footed shot past Bill Hamid.

D.C. United actually started the match in promising fashion after Hamid saved a Carlos Vela penalty kick early in the match, but that save only served to delay LAFC’s onslaught.

D.C. United’s day has gone from bad to worse after Wayne Rooney drew a straight red card for a studs-up challenge on Diego Rossi early in the second half.

Jozy Altidore notched a goal and assist, but he and TFC were forced to settle for a draw in a match they dominated for long stretches.

C.J. Sapong latched onto a long pass from Jeremiah Gutjahr and chipped a shot over Alex Bono in first-half stoppage time to help the Fire pull even just before the break.

Nemanja Nikolic helped give the Fire a lead in the 62nd minute, but TFC responded in the 76th minute when Altidore sent a cross to Jonathan Osorio, who headed home the equalizer to help keep TFC undefeated.

Minnesota United bounced back from a loss in New England a week ago by downing the New York Red Bulls on their home turf.

The Loons took a two-goal advantage at Red Bull Arena with goals separated by 16 minutes.

Abu Danladi’s right-footed finish in the 34th minute gave Adrian Heath’s side an advantage before Romario Ibarra finished from a rebound.

The Red Bulls pulled a goal back in the 70th minute as Cristian Casseres Jr scored his first senior goal for the club.

However, the hosts could not find a equalizer as they once again fell in front of their home supporters.

The Columbus Crew posted another clean sheet at home after a 1-0 triumph against the New England Revolution.

Defender Josh Williams got on the end of Federico Higuaín’s cross and made no mistake, beating Cody Cropper to the bottom-right corner for the lone goal of the match.

Michael Mancienne was sent off for the Revs after picking up a second yellow card after the hour mark. The defender fouled Higuain late which resulted in an early dismissal.

Zack Steffen made one save at Mafpre Stadium which boosted the Crew to top of the East.

Orlando City flexed their muscles late to down the Colorado Rapids 4-3 at home on Saturday night.

Nani scored his first two MLS goals including the game-winning goal in the 89th minute to steal all three points.

Kei Kamara opened things in the ninth minute for Colorado before the Lions hit back twice before halftime.

Orlando City fought back to take a lead with a pair of goals in a two-minute span. Nani’s first goal for the club came in the 31st minute, two minutes ahead of Tesho Akindele’s right-footed finish.

Chris Mueller’s finish from a tough angle made the last minutes interesting ahead of Nani’s penalty kick finish. Axel Sjoberg’s handball gave the Portuguese forward the chance to give Orlando City their second win of 2019.

The Philadelphia Union made it three consecutive wins, using a pair of goals late to down FC Dallas 2-1.

The Swiss centerback’s fifth-career MLS goal have Luchi Gonzalez’s men ahead at the break.

Alejandro Bedoya’s smooth finish in the 91st minute put the hosts ahead in stoppage time.

In an All-Western Conference clash at Avaya Stadium, the San Jose Earthquakes earned their first three points of 2019.

A trio of first-half goals put the hosts in a great position as they ended up 3-0 winners over the Portland Timbers.

Shea Salinas has handed the Earthquakes an early lead. The midfielder scored his first league goal since July 2017, beating Jeff Attinella to the center of the goal.

Danny Hoesen extended the hosts advantage in the 33rd minute before Cristian Espinoza added a third if the half a minute later.

Daniel Vega kept the Quakes in front by three with a penalty kick save on Diego Valeri.

The Quakes put 13 shots on goal against Portland as they ran home winners against the defending West champs.

The Seattle Sounders returned home and returned to winning ways with a 1-0 triumph over Real Salt Lake.

Nicolas Lodeiro received a pass from Cristian Roldan and made no mistake as he beat Nick Rimando to the bottom-left corner in the 18th minute.

Jordan Morris missed a pair of chances late to ice the result sooner while Jefferson Savarino rattled the post in the 73rd minute for RSL.