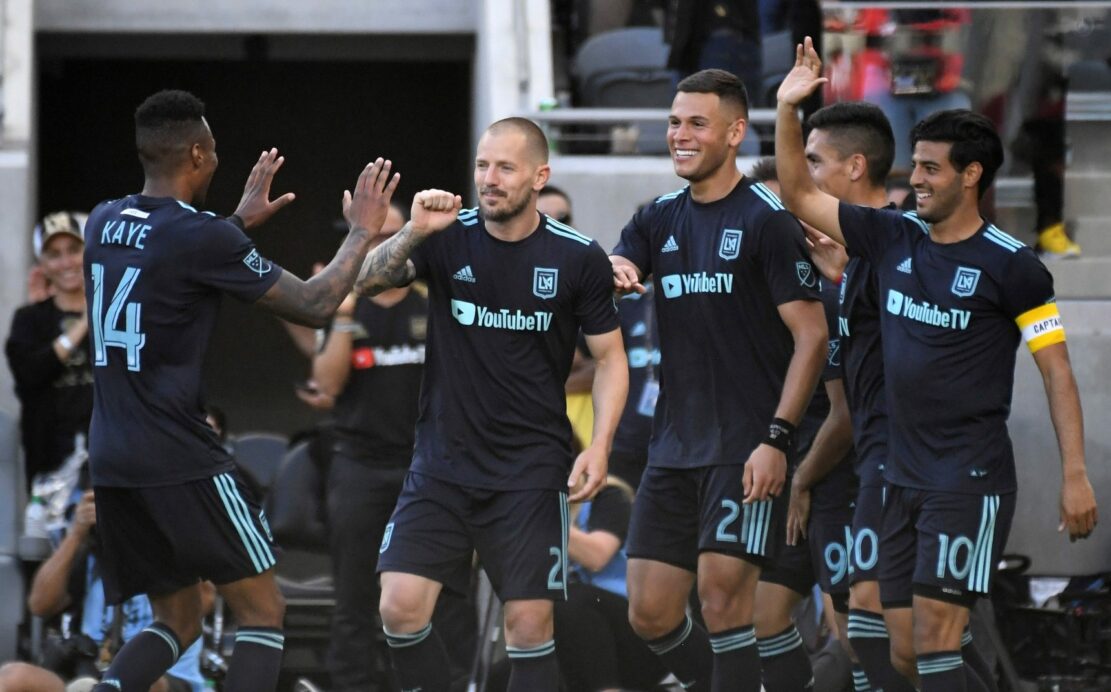 A week after meeting at Banc of California Stadium, LAFC takes a trip to Seattle to face the Sounders in the marquee match of MLS Week 9.

Bob Bradley’s side rolled past its West opponent 4-1 on Sunday, with Carlos Vela and Mark-Anthony Kaye highlighting the strong performance.

The LA Galaxy did not extend their winning run on Wednesday, but did earn a point against Minnesota United. Guillermo Barros Schelotto’s side returns home to host Real Salt Lake on Saturday.

Elsewhere, FC Dallas takes on a surging San Jose side while the Houston Dynamo welcome Columbus to town. D.C. United travels to Allianz Field on Sunday, hoping to win their second straight game.

Here’s a closer look at the top five matches this weekend:

Seven days after LAFC handed the Seattle Sounders their first loss of 2019, the sides meet again, this time at CenturyLink Field.

The current MLS leaders have 22 points through nine matches and look like early contenders for a place in MLS Cup. Carlos Vela’s 10 goals and five assists have been a major reason for the team’s success, but other players have begun contributing as well.

Mark-Anthony Kaye had three assists last weekend and Diego Rossi has six goals to his name.

The Sounders fought back for a point on Wednesday in a 2-2 draw against San Jose. Kelvin Leerdam and Harry Shipp scored the goals but Brian Schmetzer’s side will feel disappointed with allowing the Earthquakes to a two-goal advantage.

Possession will be key for Seattle as it cannot allow LAFC to get on the scoreboard early.

The Galaxy were held to a 0-0 draw in Minnesota on Wednesday which saw Zlatan Ibrahimovic criticize the Loons energy a day later. The Galaxy’s unbeaten run sits at six matches and Ibrahimovic is expected to play a huge role on the offensive end of the field.

RSL has bounced back from a slow start with a pair of wins over Orlando City and FC Cincinnati and will aim to knock off the hosts. Albert Rusnak scored a brace last weekend against FC Cincy, while Sam Johnson scored in a second consecutive match.

Saturday afternoon features a pair of West sides meeting up at Toyota Stadium.

Luchi Gonzalez’s side earned a statement win in Atlanta last weekend, handing the Five Stripes their first home loss since last summer. Bryan Acosta scored his second goal for the club while Jesus Ferreira also found the back of the net.

San Jose earned a point in Seattle, which gave them seven points earned in April. Matias Almeyda’s side is continuing to learn the South American’s system with Shea Salinas and Danny Hoesen (seven goals combined), the major beneficiaries so far.

The Houston Dynamo return home looking to bounce back from their first loss of 2019.

Wilmer Cabrera’s side lost 2-1 to the LA Galaxy last Friday, but will face the slumping Crew this weekend. Their wide players will need to get after the Crew’s backline, which is seeking confidence of their own. Romell Quioto and Alberth Elis are the likely sources of energy for the Dynamo.

Caleb Porter’s side has lost three straight for the first time since March-April 2018 and is in need of points. Gyasi Zardes has failed to find the back of the net in the last four matches and that needs to change for Columbus to win on Saturday.

These sides have alternated wins over the past four years against one another.

Six points separate D.C. United and Minnesota United in the league table as the pair prepare to meet on Sunday.

Adrian Heath’s side held the Galaxy scoreless on Wednesday, and now it has to try to limit Wayne Rooney and Co. Francisco Calvo returns Sunday after serving a suspension on Wednesday, while Miguel Ibarra and Romario Ibarra will run the midfield.

Rooney’s fabulous free kick earned the Black and Red a needed three points in Columbus on Wednesday. The former Manchester United and Everton man has the ability to carry D.C. to a win but will need his teammates to also provide chances in what will be, a tough atmosphere.

Here’s all of this weekend’s MLS action: