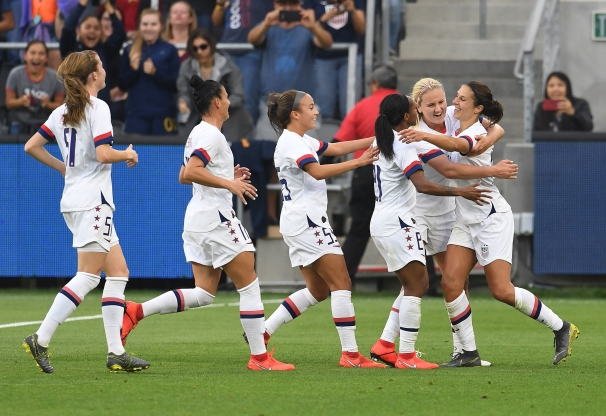 The U.S. Women’s National Team ended their April schedule on a high note, rolling past Belgium 6-0 on Sunday night at Banc of California Stadium. It was a dominant performance that many have been waiting to see from the USWNT after Australia gave the No. 1 ranked team in the world, a run for their money just three days prior.

In front of over 20,000 fans in Los Angeles, Jill Ellis’ side pressured their European opponents constantly and used saw scored five of their goals with headers. Longtime veteran Carli Lloyd made the most of her first start in 2019, scoring a brace to open a dominant first-half. It was a positive sight for Lloyd who figures to remain a key part of the team’s plans in France at the FIFA World Cup.

“Nothing has changed for me, I’ve been putting in the work every single day,” Lloyd said. “The tough thing is nobody sees that hard work every day, nobody is on the training pitch watching me. They see the games, they see the opportunities. Tonight I had an opportunity to play 90 minutes. I hadn’t played 90 minutes in a long time, I wanted to do everything in my power to seize the opportunity. I feel I still have a large and significant role to play on this team and I know I can help my teammates win a trophy this summer. I just love winning.”

“She’s a gamechanger, whether she is on the pitch or coming onto the pitch that’s her role for us,” USWNT head coach Jill Ellis said. “I thought she was sharp, fantastic, played her role perfectly whether that was up at the No. 9, getting on the ends up things. That’s why she is special, that is what I want to see from her. I think it speaks to our depth and that she can be a difference-maker for us.”

Alex Morgan registered her 101st career goal for the USWNT with lovely skill and calm finish in the second-half. Lindsay Horan, Samantha Mewis, and Jessica McDonald all got on the scoresheet for the first time this calendar year which gave the team even more positives to take away from California.

The most important part was Ellis got to see her team play well in back-to-back performances. It was the first set of wins for the USWNT since the Concacaf Women’s Championship last October and they did so with strong defensive work and confident finishing on the other end of the pitch.

“At times we pressed really well tonight and that was our gameplan to do so,” Ellis said. “We even brought in fresh legs onto the pitch in order to keep pressuring Belgium and makes it hard. Belgium is a very good passing team and I think they have talent but when you pressure constantly it’s going to mess up the rhythm. I’ve seen Belgium on film and they’ve had good results, but a lot of it came down to the atmosphere tonight too. The crowd and facility was amazing.”

“With our rotation tonight, we were looking again at different pairings, trying to look at different ways to create chances,” Ellis said. “Fresh legs were also important and we wanted to give some other players chances to play, while also looking at depth at positions.”

After being out-possessed by Australia and allowing three goals for the first time since January, the USWNT buckled down and took it to Belgium. They allowed zero shots on goal, were able to take advantage of aerial battles which led to goals, and closed out camp on the best note possible.

Christen Press, Mallory Pugh, Ali Krieger, and Mewis all got starts which provided Ellis and her staff different looks as they begin considering their final roster for this summer. South Africa, New Zealand, and Mexico are the remaining three tune-ups for the USWNT before a date with Thailand kicks off group stage play on June 11th.

“No game is going to an easy one and having Sweden in our group is going to be tough,” Morgan said.” I think every game will bring something different to the table and we will have to be at our best if we want to keep this momentum going forward. All three of the styles we face in May are what we will see in France but having the full group of 23 players will also be good to start getting prepared as a unit.”