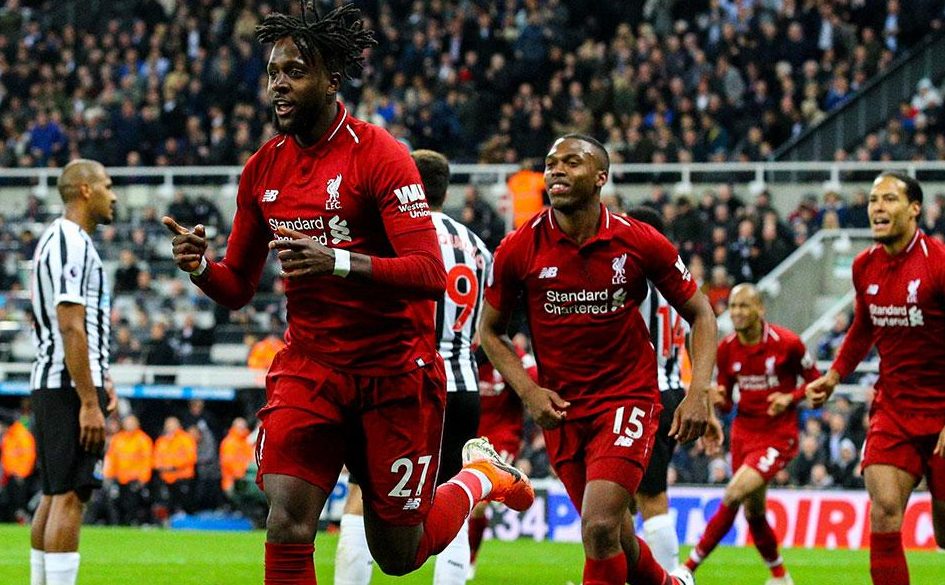 Liverpool was staring a tie right in the face on Saturday at St. James Park but Divock Origi played the hero in the dying moments.

Origi’s 86th minute header proved to be the game-winning goal as Liverpool hung on for a 3-2 win over Newcastle United. The Reds led at halftime thanks to goals from Virgil van Dijk and Mohamed Salah separated by 5 minutes.

Van Dijk was left wide open for a free header in the 13th minute, but Newcastle responded in positive fashion. Christian Atsu’s first Premier League goal since 2017 tied the sides up after the midfielder scored from close-range. Salah’s right-footed volley propelled Liverpool back in front before halftime.

Salomon Rondon’s thumping finish in the 54th minute made it 2-2 but Origi had the final say. The substitute headed Xherdan Shaqiri’s cross past Martin Dubravka for the winner. Liverpool go back atop the league summit ahead of Manchester City’s clash with Leicester City on Monday.

Elsewhere, Bayern Munich earned three points at home while Borussia Dortmund let a two-goal lead slip at Werder Bremen. Juventus and Torino tied 1-1 in the Turin Derby, Napoli used a late winner to defeat Cagliari, and Barcelona fell to Celta Vigo. PSG was held to a draw at home against Nice while Lyon also tied Lille.

Chelsea clinched a berth in next season’s UEFA Champions League with a confident 3-0 win over Watford on Sunday. Eden Hazard assisted on two goals while Gonzalo Higuain found the back of the net. Ruben Loftus-Cheek’s header in the 48th minute put Chelsea ahead before David Luiz headed in a goal of his own three minutes later. Higuain finished Pedro’s through ball assist in the 75th minute to seal the home win. Chelsea faces Eintracht Frankfurt on Thursday in the second leg of their semifinal Europa League tie.

Barcelona suffered a shocking league defeat on Saturday, losing 2-0 on the road at Celta Vigo. Although several stars were rested for this week’s Champions League tie, the Catalan side were handed only their third league loss of the season. Maxi Gomez’s 13th goal of the season broke the deadlock after the hour mark before Iago Aspas iced the win with a penalty kick before stoppage time. Ousmane Dembele left the match with an injury and will be unavailable for Barca this week.

Atletico Madrid was also on the end of a shocking loss as they fell 3-0 at Espanyol. An own-goal from Diego Godin put the hosts ahead on the verge of halftime. Borja Iglesias capped off a superb fast break by Espanyol in the 52nd minute to extend the lead. The Spanish striker scored his 18th goal in all competitions as he netted a late penalty kick. Atletico are six points clear of local rivals Real Madrid with two matches to play.

Bayern Munich remained in first place in the Bundesliga with a 3-1 win over Hannover. Robert Lewandowski and Leon Goretzska each tallied goals in the opening half, giving Niko Kovac’s side a two-goal halftime lead. Lewandowski headed in from close range while Goretzka beat Michael Esser from long-range. Video review helped give Hannover a lifeline as Jerome Boateng was whistled for handball, allowing Jonathas to score from the penalty spot. However, the Brazilian was sent off nine minutes after coming on which allowed Bayern to take advantage. Franck Ribery’s sixth goal of the season capped the final score at 3-1.

Borussia Dortmund coughed up a chance at all three points on Saturday, settling for a 2-2 tie against Werder Bremen. Christian Pulisic’s clever run and finish gave the visitors an early advantage while Paco Alcacer’s 19th goal in all competitions made it 2-0 at halftime. Kevin Mohwald’s 70th minute strike went through the hands of Roman Burki to kickstart Bremen’s comeback. Claudio Pizarro roofed his sixth goal in all competitions to earn Bremen a point at home.

Juventus fought back for a 1-1 draw on Friday in the latest Turin Derby against Torino. Cristiano Ronaldo’s 84th minute header from a set piece stole a point from the hosts at the Allianz Stadium. Sasa Lukic’s first league goal for Torino had the hosts in front after 16 minutes but Juventus were able to avoid their first loss to Torino since 2015.

Napoli officially clinched second place in Serie A with a 2-1 home win over Cagliari on Sunday. The hosts had to fight back after the visitors took the lead through Leonardo Pavoletti’s left-footed strike in the 64th minute. Dries Mertens leveled the score in the 85th minute via a header before VAR ruled in favor of a late penalty. Fabrizio Cacciatore’s hand ball allowed Lorenzo Insigne to score the game-winner in the 98th minute. Cagliari are not yet guaranteed league safety with three matches to go.

Paris Saint-Germain missed a chance at a home win on Saturday, tying Nice 1-1. Edinson Cavani’s 93rd minute penalty was saved by Walter Benitez which gave Nice a share of the spoils. Ignatius Ganago’s left-footed strike put Nice in front after 46 minutes but Neymar would level the score from the penalty spot. Nice remain in the fight for a European qualification spot with three matches to go.

The points were also shared on Sunday between Lyon and Lille as it finished 2-2 at the Parc OL. Lille held a 2-1 advantage after the hour mark as Loic Remy and Boubakary Soumare scored to cancel out Martin Terrier’s ninth league goal of the season. Leo Dubois’ finish from a rebound made it 2-2 which found be the final between the second and third placed sides in the table. Lille remain six points better than Lyon in the table.