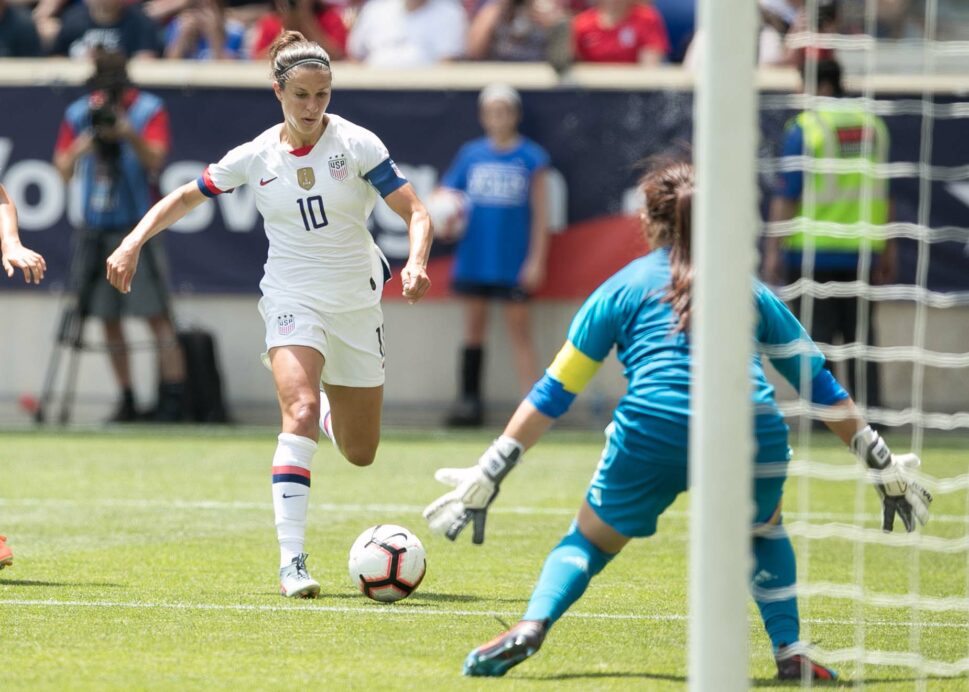 HARRISON, N.J. — Being able to earn a lot of offensive opportunities is a credit to a team’s hard work but being able to score on those chances is what makes a good team a great team.

The U.S. Women’s National Team heads to the 2019 FIFA Women’s World Cup in France on a four-match winning streak by a combined score of 18-0, and numerous players getting on the scoresheet to add to their individual confidence. Sunday’s 3-0 success over Mexico at Red Bull Arena sent the fans home happy, but it wasn’t the most convincing offensive performance.

The team’s first goal came from an error from Mexico goalkeeper Cecelia Santiago, while its second was a close-range finish from Mallory Pugh. Christen Press’ confident strike late in the second half was impressive, but the final scoreline could’ve easily read 7-0, 8-0. Finishing in front of goal is something that the team knows will need to get better against tougher competition.

“The key is for us will be to dominate games with our tactics,” Rapinoe said. “Being able to control games that way is what we need to do and sometimes I feel we are impatient and frantic with the ball. We get caught in this transition feel and we need to be better at taking the best chance rather than just taking every chance. I think we will be better offensively for it and it will just make us a better unit.”

Rapinoe was right, sometimes the USWNT looked frantic on the ball and instead of working it around and looking for the best opportunity, they rushed and wasted a chance. In its 25 shots in total, 11 were on goal but Santiago wasn’t troubled on half of those.

A match against Mexico, a team who won’t be in France in two weeks times, should’ve been a better sendoff for this team as they now prepare for Thailand. The positive news is that the front three for the USWNT is one of the best in the World. All three can make a difference in France and will be lively in its goal of bringing home the U.S.’ fourth World Cup title.

“I think our front three with Megan, Tobin, and Alex is going to be really hard to defend against,” former USWNT striker Abby Wambach said. “The idea of soccer is to score more than the other team and it’ll just be really exciting to see how they’ll create goals. To watch this front three run, work, and operate it gives me a sense of relief because if I am an opponent I have to try and shut down one or two of these front three.”

“I think the coaching staff has been tinkering with this and that through the last months and trying to come up with new things to take to France,” Wambach said. “Now with the game done it will give the team a sense of relief to get out of the U.S. and get prepared. It’s going to take a bit of luck as well, you have teams like England, France, Australia that are going to be tough.”

Thailand and Chile are two sides who are unfamiliar to the USWNT, so expect both teams to bunker in against them. Sweden will pose the toughest test in the group stage, currently ranked No. 9 in the FIFA Women’s Rankings.

The USWNT will be favorites to win the group and advance into the knockout stages, where toughest tests like England, France, Canada could come into play. As the team advances in the tournament, its goalscoring ability will need to improve and Morgan, Lloyd, Rapinoe, and Heath are the four likely candidates to headline that category.

“Whoever is left as that person in the front three not being covered is going to find their way on the scoresheet, whether that is assists or goals,” Wambach said. “I think Julie Ertz has been solid and a leader as our defensive center mid. Becky [Sauerbrunn] and Abby [Dahlkemper] in the backline, I just think with this team we haven’t seen the potential that they can get to.”