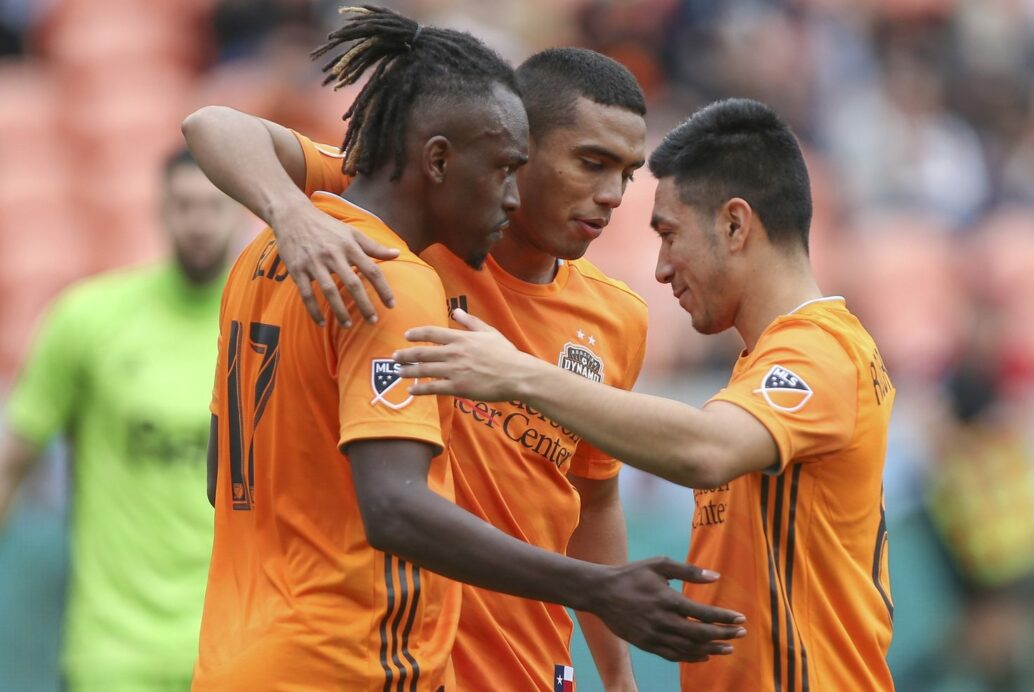 With just over a month away until the Concacaf Gold Cup, plenty of MLS sides will look to pack in some victories knowing that players will be missing on international duty. Matchday 11 comes full throttle with a pair of Western Conference clubs meeting in the Pacific Northwest in the headlining match.

The Seattle Sounders welcome the Houston Dynamo to CenturyLink Field, as both teams sit level on points in the West table. Three consecutive draws for Brian Schmetzer’s bunch isn’t the worst set of results, while the Dynamo have won two straight. Mauro Manotas and Jordan Morris will headline the attacks for both sides.

Elsewhere, NYCFC faces a trip out west to take on the L.A. Galaxy. D.C. United concludes the weekend’s action with a home date against Sporting KC while league leaders LAFC take on the Columbus Crew away from home. The East-leading Philadelphia Union take on Toronto FC with revenge on their minds after an opening day loss to the Canadian club.

Draws against San Jose, LAFC, and Minnesota have been favorable results for the Sounders who will need to be strong defensively against the Dynamo. Chad Marshall and Kim Kee-Hee will have to be physical against the likes of Mauro Manotas, who is has been one of MLS’ consistent scorers since entering the league.

Wilmer Cabrera’s bunch has won two straight and could pose problems for the Sounders physical backline. Manotas vs. Marshall should be an intriguing duel while Alberth Elis and Tomas Martinez will also look to create chances against Stefan Frei.

Back-to-back defeats against the Crew and Red Bulls respectively has proven that the Galaxy attack can be shut down and controlled. Zlatan Ibrahimovic did not find the back of the net in Columbus and will now go up against Maxime Chanot and Alexander Callens. Both defenders can limit the Swede who has been a one-man wrecking crew for the Galaxy’s offense.

NYCFC is riding a six-match unbeaten run into Los Angeles and looked to have found its stride. Maxi Moralez scored a goal and added an assist last weekend and will need to be just as influential against the Galaxy if the Eastern Conference club wants to come home with points.

NYCFC has won the last three meetings between the teams.

The Black and Red have alternated results in their last five matches but saw their three prominent attackers get on the board last weekend. Wayne Rooney’s experience is key for the team, while Paul Arriola and Luciano Acosta help with the build-up play. All three can get after SKC at home on Sunday.

Peter Vermes’ side has not won in seven straight across all competitions and will have to be mentally tough this weekend. With several players out due to injury, SKC needs to get after D.C. United and now allow their opponents time and space on the ball. Krisztian Nemeth and Johnny Russell are the likely duo to do just that offensively.

Toronto FC welcomes the East-leading Philadelphia Union to BMO Field hoping for a season sweep in the series.

Greg Vanney’s side downed the Union 3-1 on Opening Day and would be a point behind Philly if they can win on Saturday. Jozy Altidore’s absence on Wednesday saw Ayo Akinola start up top, but Terrence Boyd may get the call to provide physicality against the Union’s centerbacks.

Jim Curtin has seen his side rise to top spot in the East, thanks to the club’s depth and willingness to work. A 6-1 bashing of the New England Revolution saw Sergio Santos score his first two MLS goals, while Kacper Pryzbylko continued his strong form.

Both players provide different aspects to their game and could make it a tough afternoon for the TFC backline.

League leaders LAFC will be favorites to win at Mafpre Stadium on Saturday, but the Crew are coming off an important win of their own midweek.

Caleb Porter’s side downed the Galaxy 3-1 with three different players registering goals. Gyasi Zardes ended his lengthy drought in front of goal while Federico Higuain and Hector Jimenez also scored. Zardes will need to pose a threat against the LAFC defense who have been solid up to this point.

LAFC has drawn back-to-back matches and will need to get back to their dominant attacking play on the road. Carlos Vela and Diego Rossi will see much of the ball, while Mark-Anthony Kaye helps create chances. Eduard Atuesta has been one of LAFC’s underrated players so far in 2019 and he will go head-to-head with the Crew’s Higuain in midfield.