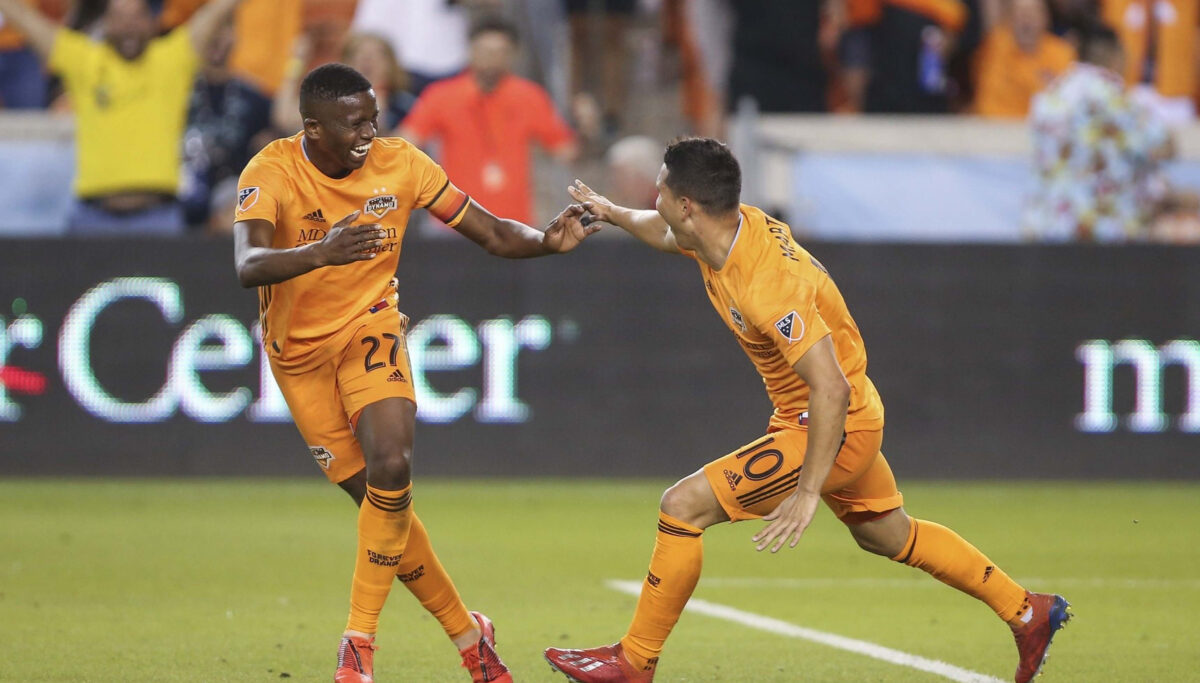 The opening weekend of May sees two state rivals duke it out in the first Texas Derby of 2019.

BBVA Compass Stadium will see the Houston Dynamo welcome FC Dallas to town. Both sides have secured victories and sit a point off one another in the Western Conference standings. Dynamic attacks have helped both teams to strong starts and will be on display once again this Saturday.

Minnesota United remains at Allianz Field to take on the Seattle Sounders to town. Adrian Heath’s side earned their first home win at their new confines and will now look to take the scalp of one of the league’s top teams.

Elsewhere, the New York Red Bulls host the Los Angeles Galaxy at Red Bull Arena. A pair of current top-six sides in the East will also duke it out as Orlando City hosts Toronto FC.

The first Texas Derby of the season comes from Houston with the Dynamo hosting FC Dallas.

Wilmer Cabrera’s side are fifth in the West and know a win over their rivals will see them improve up the table. In their last five matches, the Dynamo have won four of them with the only blemish coming in L.A.

Alberth Elis and Mauro Manotas headline the attacking front while a lot of the build-up play will again come from Memo Rodriguez and Tomas Martinez. Boniek Garcia will play an important role, trying to limit Dallas’ attacking midfielders.

FC Dallas sit a point better in the standings and have won three of their last five matches. A 0-0 draw against the San Jose Earthquakes wasn’t their best performance but their strong defensive work under Luchi Gonzalez continued.

Paxton Pomykal is out so Bryan Acosta and Pablo Aranguiz will run most of the show in midfield.

Allianz Field will be rocking for the third consecutive match as Minnesota United hosts the Seattle Sounders.

Adrian Heath’s side is sixth in the West and last defeated D.C. United, 1-0, on Sunday. Angelo Rodriguez will need to continue his in-form season with Darwin Quintero questionable after picking up an injury last weekend. The match will feature Osvaldo Alonso’s first match against the team he captained to an MLS Cup title and spent a decade playing with.

The Sounders are in third and were fortunate to earn a point against LAFC last Sunday. Cristian Roldan’s suspension was rescinded on Wednesday so he will be eligible. Jordan Morris scored his fourth goal of the season in the tie.

A pair of underachieving clubs so far in MLS will meet in Kansas City to close out the weekend.

Sporting KC, eighth in the West, picked up a point in a 4-4 home draw against New England last Saturday. Gerso Fernandes is the latest player to head to the injured list, joining several other SKC starters. Krisztian Nemeth scored a brace in the tie and leads the team with six goals.

The Five Stripes picked up their first home win of 2019, defeating Colorado 1-0 last weekend. Frank De Boer’s side are four points off the top six and will need to try and earn something in this contest. Julian Gressel bagged his first goal of the season at Mercedes-Benz Stadium.

The Zlatan Ibrahimovic show heads to the East Coast to face the New York Red Bulls.

The Galaxy are second in the West, a point behind local rivals LAFC. A 2-1 win over Real Salt Lake last Sunday saw Ibrahimovic score the game-winner, giving him eight goals this campaign. However, the team was handed a blow with Romain Alessandrini out until September.

The Red Bulls are three points off the top six and are coming off a 1-0 home win against FC Cincinnati. Connor Lade’s magical strike helped ease the pressure on Chris Armas for now, but the Red Bulls need to avoid a lopsided defeat against one of the better teams in MLS.

One point separates Orlando City and Toronto FC in the East with the Lions welcoming their Canadian opponents to town.

James O’Connor’s side has picked up points in its last two matches, recently tying NYCFC 1-1. Nani continues to play a major role for the Lions since his move to MLS, scoring his fifth goal of the season.

Greg Vanney’s side is two spots higher in the standings, but lost a shocker to Portland at BMO Field. Jozy Altidore’s absence means that Alejandro Pozuelo will be kept under a close watch by his opponents. The 27-year-old has four goals and four assists in five career MLS appearances.

Here is the rest of this weekend’s MLS schedule: