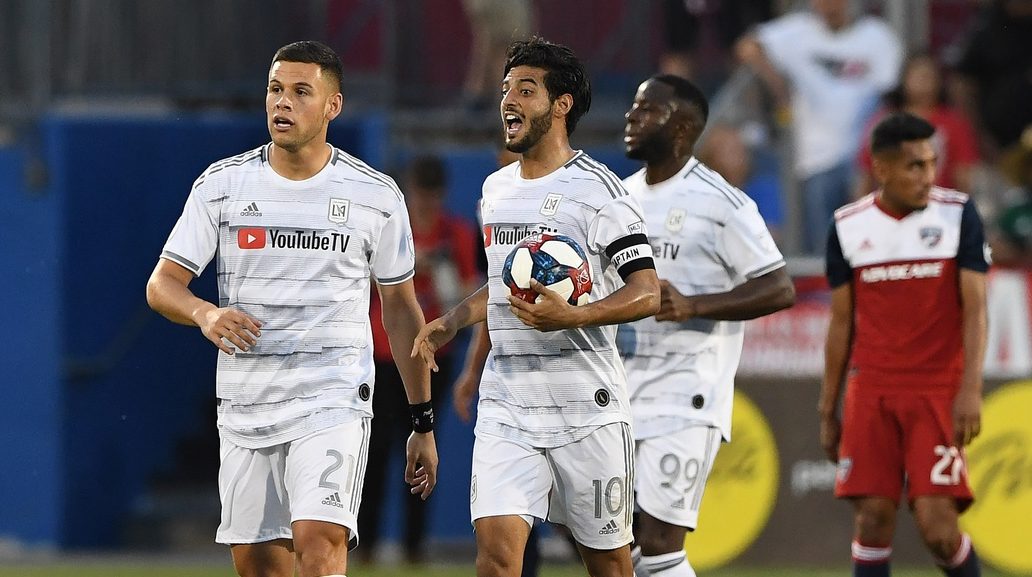 Memorial Day Weekend is headlined by two top-three sides meeting up at Banc of California Stadium on Friday.

Carlos Vela and LAFC welcome the Montreal Impact to town as Bob Bradley’s bunch come into this weekend’s showdown on a six-match unbeaten run while the visiting Impact has won just two of their last five matches.

Elsewhere, two of the top five teams in the West standings meet at Allianz Field as Minnesota United hosts the Houston Dynamo. The Five Stripes will look to rebound from last weekend’s loss in Harrison to the Red Bulls by facing Real Salt Lake away from home.

Here’s a closer look at this weekend’s top MLS matches:

The Banc of California Stadium will host just the second-ever matchup between LAFC and the Montreal Impact Friday night.

LAFC has cruised to the top spot in the league but has dropped points in three of their last six matches. Carlos Vela’s 14 goals have been a huge part for the team’s success, but they need to continue turning draws into wins. Vela scored in the team’s trip to Montreal last season, resulting in a 5-3 win.

Remi Garde’s men have won only two of their last five matches, recently losing to FC Cincinnati and tying New England. Ignacio Piatti’s return last weekend is a boost for the club, who are in dire need of playmakers on the offensive end. Piatti scored three goals in three appearances in March before getting injured.

Adrian Heath’s side sits in fifth place in the West and will look to remain unbeaten in their new stadium. Ethan Finlay played the hero last weekend, but Ozzie Alonso has a tough test against Houston’s dynamic midfielders. Angelo Rodriguez and Darwin Quintero will once again highlight the Loons attack.

Wilmer Cabrera’s men are unbeaten in back-to-back matches, recently outlasting D.C. United at home. Memo Rodriguez’s fifth goal of the season snapped a lengthy scoreless drought for the young midfielder, while Tommy McNamara opened his account. Rodriguez’s rise in production has been huge for the Dynamo, who need other players to assist Mauro Manotas in the goal-scoring department.

Frank De Boer’s side lost their first match since April 20th on Sunday, falling to the New York Red Bulls. Tito Villalba was also injured in the match which could cost him a place in the lineup this weekend. Pity Martinez and Josef Martinez will provide the offensive chances, while Ezequiel Barco is out on international duty.

RSL has rolled off back-to-back wins for the second time this season. Sebastian Saucedo registered a two-point performance against Toronto FC, ending a lengthy pointless streak as well. Mike Petke has plenty of different attacking options to choose from, but it will be his defenders that need to be composed against a Five Stripes attack always looking to pounce.

Sporting KC continues to nosedive in the West, riding a seven-match winless streak. Injuries have hurt Peter Vermes’ side who still are without plenty of starters. Leading goalscorer Krisztian Nemeth received a red card last weekend so will miss this contest as Johnny Russell could be forced to play as a false No. 9 in Nemeth’s absence.

The visiting Sounders continue a four-match road trip after picking up a point last weekend in Philadelphia. Stefan Frei made six saves in that contest, while defensive Seattle was pushed to the limit by the East leaders. Raul Ruidiaz is expected to start after coming off the bench against the Union, so look for him to get after a struggling SKC backline.