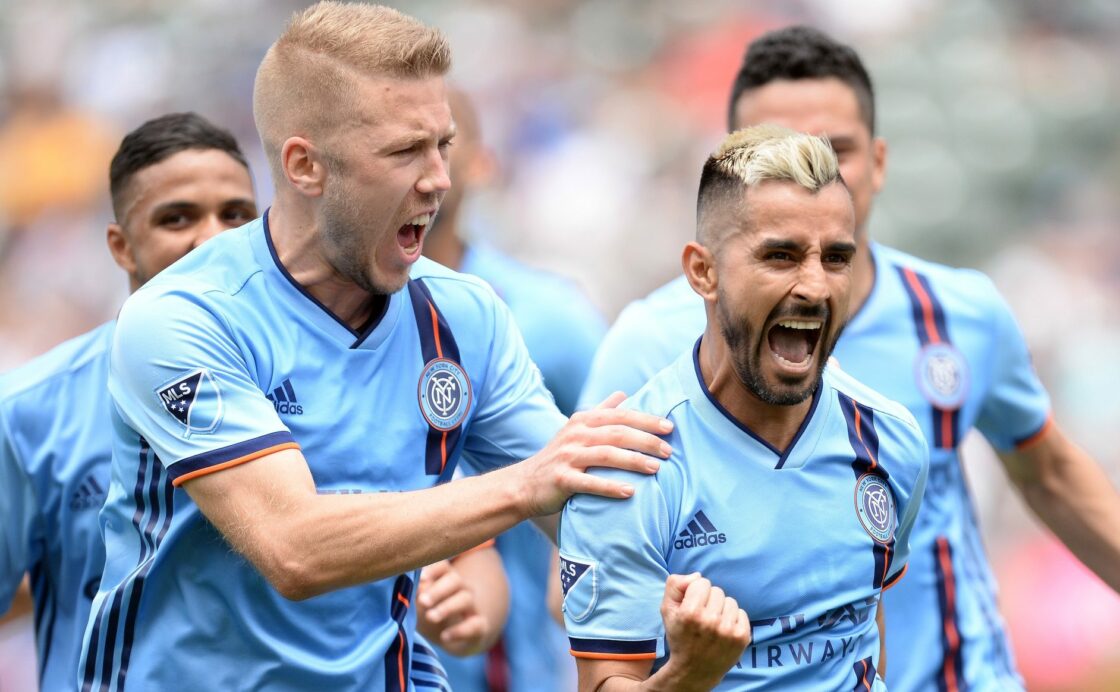 Headlining the day’s action was NYCFC’s 2-0 win over the L.A. Galaxy. It extended the Eastern Conference club’s unbeaten run to seven matches and handed them back-to-back shutout road wins.

The East-leading Philadelphia Union kept their strong run going as they downed Toronto FC 2-1 at BMO Field. Jamiro Monteiro scored the game-winner as Jim Curtin’s side exacted revenge on their Canadian opponents.

Elsewhere, FC Cincinnati snapped a five-match losing streak while the New York Red Bulls rolled past FC Dallas away from home. LAFC shut out the Columbus Crew at Mafpre Stadium, the New England Revolution bounced back with a home win, and Real Salt Lake defeated the Colorado Rapids in the Rocky Mountain Derby.

FC Cincinnati ended their five-match losing streak on Saturday afternoon after a 2-1 win over the Montreal Impact.

Orji Okwonkwo’s header pulled a goal back for the Impact but it would not help the visitors earn any points from their trip to Cincinnati.

FC Cincy sits in 11th place while the Impact are in third.

The New York Red Bulls bounced back from a midweek defeat to roll past FC Dallas 3-1. Three different goalscorers got on the scoresheet for Chris Armas’ side who claimed their first road win in Dallas since 2014.

Jesus Ferreira canceled out Cristian Casseres’ early strike which saw the sides go into halftime leveled at 1-1. Sean Nealis took advantage of a Red Bulls corner kick to put the visitors in front after halftime.

Brian White’s second goal of the season iced the result for the Red Bulls. Ryan Meara made four saves in the victory.

NYRB are in ninth after the win while FC Dallas sit in fifth place.

Jamiro Monteiro played the hero for the Philadelphia Union on Saturday, scoring the game-winning goal in a 2-1 road win over Toronto FC.

The midfielder finished off a nice pass from Kacper Pryzbylko in the 68th minute to put Jim Curtin’s side in front for good. It was Monteiro’s second goal for the club.

Chris Mavinga’s own goal put Philly ahead in the first-half before Alex Pozuelo equalized with a sensational free kick.

Philly’s third win in a row sees them three points clear of D.C. United, who play tomorrow. TFC sits in fifth place after the home loss.

New York City FC needed only the first half of Saturday’s match in L.A. to return home with all three points.

Heber and Maxi Moralez both scored goals as NYCFC handed the Galaxy their third consecutive loss. The Brazilian forward broke the deadlock in the 44th minute, beating David Bingham from point-blank range.

Uriel Antuna was whistled for handball before halftime, allowing Moralez the opportunity to double NYCFC’s lead. Moralez bagged his second goal in as many matches to ice the result for the visitors.

The Galaxy only recorded one shot on goal out of their 14 in total, now sitting five points behind rivals LAFC for first place.

Following a pair of draws, LAFC returned to winning ways with a 3-0 thumping of the Columbus Crew at Mafpre Stadium.

Mark-Anthony Kaye’s first-half finish put the visitors ahead before halftime, while Adama Diomande and Carlos Vela scored late goals to pad the win.

Diomande’s finish came from a rebound after Josh Perez struck the post, before Vela’s long-range curling attempt iced the commanding win. The Crew’s offensive struggles seemed to return as they only had one shot on Tyler Miller in goal.

The Crew sit in sixth place while LAFC remain top of the league.

The Revs jumped ahead in the 18th minute, as left back Edgar Castillo swung in a ball from the sideline and Juan Agudelo swooped in to beat Nick Lima to the ball and finish with a side-footed redirect from in close.

The home side doubled their lead in the 29th minute after Teal Bunbury made a turn in the box and was taken down by the Quakes’ Harold Cummings. Cristian Penilla finished the resulting PK past Daniel Vega to make it 2-0.

New England pushed it to 3-0 in the 68th minute on a volley out front by Carles Gil. Just two minutes after subbing on, rookie Tajon Buchanan didnthe lion’s share of the work, dribbling in from the right sideline past several defenders before centering to Gil for a simple finish.

The Earthquakes got a consolation goal in the 88th minute to deny Matt Turner (six saves) a shutout. San Jose took a quick restart and Valeri Quazaishvili played a one-two with Danny Hoesen to get free in the box and score.

The Chicago Fire snatched their second win in a week after a 2-0 success over visiting Minnesota United.

Chicago’s two goals came 13 minutes apart in the opening half, which was all their needed to earn three points. Nico Gaitan’s first MLS goal came from a close-range finish to end a fast break.

Aleksandar Katai’s sixth point of the season proved to be an insurance goal as the Serbian finished from a tight angle. David Ousted made a pair of saves to preserve the Fire’s third consecutive clean sheet.

Veljko Paunovic’s side are seventh place after six points this week while the Loons are sixth in the West.

The first Rocky Mountain Derby of the season went in favor of Real Salt Lake.

Mike Petke’s side used a 53rd minute game-winning goal from Sam Johnson to claim the win at Dick’s Sporting Goods Park. RSL saw a two-goal lead slip away after goals from Danny Wilson and Kellyn Acosta drew the Rapids level.

Albert Rusnak’s penalty kick in the 25th minute had RSL ahead before Corey Baird’s first goal of the season extended the visitors advantage.

Johnson roofed a right-footed shot past Tim Howard which proved to be the final nail in the coffin.

The Seattle Sounders snapped a three-match winless streak with a 1-0 triumph over the Houston Dynamo on Saturday.

Cristian Roldan’s long-range volley proved to be the difference as Brian Schmetzer’s side drew level with the L.A. Galaxy in the West standings.

Nicolas Lodeiro struck the bar in the first-half while Jordan Morris was kept out by Joe Willis. Raul Ruidiaz was also silenced by Willis in the second-half but the Dynamo couldn’t find an equalizer.

Alberth Elis had the best look for Houston who remain in fourth place after the road loss. Seattle travels to Philadelphia next weekend.