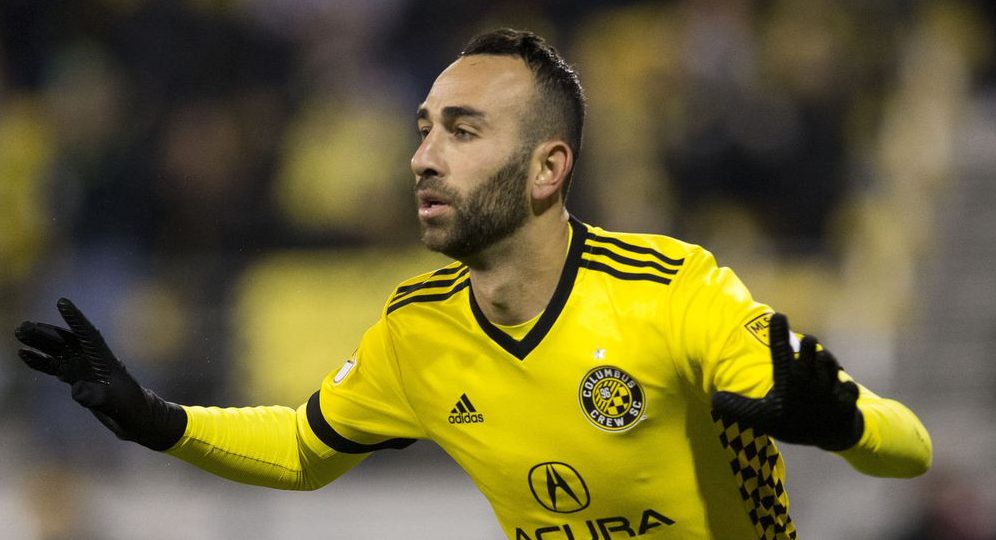 The defending MLS Cup champs added an experienced attacking option to its roster.

Atlanta United announced on Tuesday they acquired Justin Meram in a trade with the Columbus Crew. In exchange, the Crew received $100,000 in General Allocation Money and Atlanta’s second round draft pick in the 2020 MLS SuperDraft.

“Justin is a proven commodity in MLS and we’re pleased to welcome him in Atlanta,” Atlanta United VP and Technical Director Carlos Bocanegra said. “During his time in Columbus, Justin established himself as one of the better attacking players in the league and we expect him to come in and compete immediately.”

A winner of 31 caps with the Iraq National Team, Meram should be available for the Five Stripes match on Wednesday against Toronto FC.

The club announced they’ve acquired Favio Alvarez from Atletico Tucaman of Argentina’s Primera Division. Alvarez will occupy an International Roster Spot and was acquired through the use of Targeted Allocation Money.

Alvarez joined Atletico in Aug. 2016 and has made 56 appearances in all competitions since, scoring five goals. He’s also appeared for Talleres de Cordoba, Defensa y Justicia and Sarmiento de Junin.

“Favio is a talented and dynamic attacking player who will be a valuable addition to our roster,” Galaxy GM Dennis te Kloese said. “He has a versatile skillset that will allow him to play multiple positions in our attack. We think he can be a dangerous option for our club this season and we look forward to adding him to the team.”

The Galaxy travels to Columbus for midweek action on Wednesday.

Kenneth Kronholm will be making the move to Major League Soccer.

The Chicago Fire announced they acquired Kronholm from 2. Bundesliga side Holstein Kiel on Tuesday. Kronholm, 33, is under contract through the 2021 MLS season with a club option for 2022.

“Kenneth is a player that we have scouted and pursued at length,” Fire President and GM Nelson Rodriguez said. “We believe his talents fit our game model very well and he was really committed to joining our club. We’re looking forward to welcoming him in Chicago.”

Kronholm has amassed over 325 professional appearances with several teams in Germany. In the 2018-19 campaign, Kronholm made 30 appearances for Holstein Kiel who currently sit midtable in the German second-tier. He’s also appeared for SV Elversberg, Fortuna Dusseldorf, Hansa Rostock II, and Wormatia Worms.

Kronholm will battle with David Ousted for MLS minutes.

D.C. United will be without the services of Donovan Pines for two-to-four weeks.

The club announced that Pines will be out due to a sprained medial collateral ligament. Pines was signed this past offseason to a Homegrown contract after winning College Cup with the University of Maryland.

Donovan Pines has sprained his medial collateral ligament. He is expected to be out for 2-4 weeks.

“It’s disappointing,” D.C. United head coach Ben Olsen said. “I am disappointed for him. He was in a good rhythm and each game was getting a little bit better. It was nice to see him grow.”

Pines had made four appearances for the Black and Red this campaign, assisting in a 3-2 win over Colorado in April.

D.C. United are currently without Oneil Fisher, Chris Odoi-Atsem, and Joseph Mora due to respective injuries. Chris McCann is questionable this week due to a hamstring injury.

Ben Olsen’s side host Sporting KC on Sunday, looking to jump to top spot in the Eastern Conference.