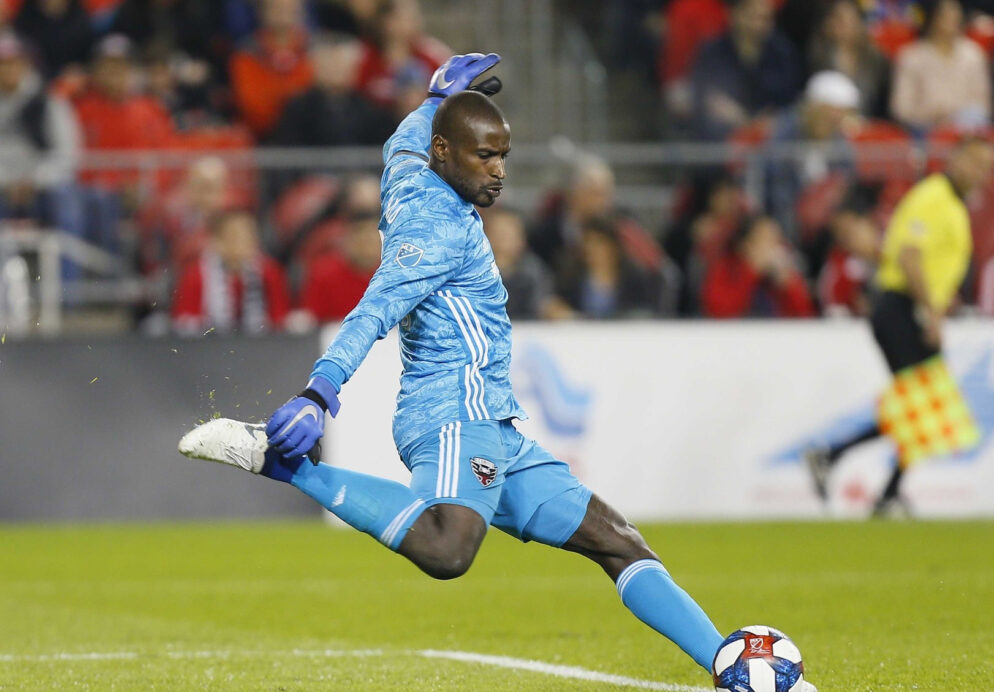 A quartet of MLS action took place on Wednesday with two teams earning all three points.

Atlanta United and the Seattle Sounders picked up wins while the Portland Timbers and Houston Dynamo each earned a point apiece in a 1-1 draw.

Bill Hamid put in a star performance as he helped D.C. United to a point in Toronto with 13 saves.

A pair of Eastern Conference clubs met at BMO Field and both sides would earn a point apiece in a scoreless draw.

Toronto FC dominated offensively but were unable to beat Bill Hamid, who made 13 saves in the road tie.

Jordan Hamilton struck the bar for TFC in the opening half, while Zoltan Steiber had the best chance for Ben Olsen’s side before halftime.

Hamid made six saves in the second-half including late stops on Terrence Boyd and Hamilton to preserve a massive point for the Black and Red.

TFC travels to Real Salt Lake for a Saturday date, while Olsen’s men face the Dynamo away from home.

The Portland Timbers left Houston with a point thanks to Brian Fernandez’s first MLS goal.

The newly-acquired midfielder came off the bench and rifled home a 77th minute equalizer from outside of the box.

Mauro Manotas continued his fine season with his sixth goal of the campaign but the Dynamo could only earn a point at BBVA Compass Stadium.

Jeff Attinella made eight saves for the Timbers who bounced back from a loss in Vancouver while Joe Willis stopped four shots.

Portland heads into an open weekend while Houston welcomes D.C. United to town on Saturday.

Atlanta United set an MLS record with their fifth consecutive clean-sheet win as they downed Vancouver 1-0 at BC Place.

Josef Martinez scored the lone goal of the match, beating Maxime Crepeau from the penalty spot in the 29th minute. Pity Martinez drew a foul from Lass which allowed the Venezuelan Martinez to score his fifth goal of the league season.

Crepeau kept the Caps alive with a trio of saves in quick succession before the hour mark. He first stopped Hector Villalba before denying Eric Remedi and Pity Martinez.

Brad Guzan made two saves as the Five Stripes moved to third in the East.

The Whitecaps travel to Sporting KC on Saturday while Atlanta United faces the New York Red Bulls on Sunday.

The Seattle Sounders topped Orlando City 2-1 in front of 37,732 at CenturyLink Field on Wednesday night. The victory moved the Sounders into second place in the Western Conference, while Orlando lost its third straight and is now 1-4-1 in its last six matches.

Raul Ruidiaz opened the scoring in the 19th minute, tapping a short Brad Smith cross past goalkeeper Greg Ranjitsingh for the early 1-0 lead. A deftly executed give-and-go between Smith and Harry Shipp left Smith unmarked inside the box at the end line.

The hosts controlled the action over the first 45 minutes, seeing at least three increasingly good opportunities to extend the lead go by. Nicolas Lodeiro caught Ranjitsingh off his line and took a chance from near the center arc, but sailed his shot into the stands.

Shipp unleashed a shot from the top of the penalty area in the 36th minute that cruised over the crossbar. And in the waning moments of the half Jordan Morris slapped a point-blank header off the FieldTurf and over the crossbar from inside the six-yard box.

Chances were few and far between for either team in the second half, but second-year midfielder Handwalla Bwana scored his first goal of the season in the 68th minute, redirecting a Lodeiro cross past Ranjitsingh for the 2-0 lead.

Referee Dave Gantar reviewed the goal to determine whether Lodeiro was guilty of a handball earlier in the play, but declined to overturn the goal.

Chris Mueller pulled one back for the visitors in the 75th minute, beating goalkeeper Stefan Frei from outside the penalty area to add some drama to the closing minutes. The visitors never seriously threatened again, however.

The Sounders lost Morris to an apparent hamstring injury midway through the second half.