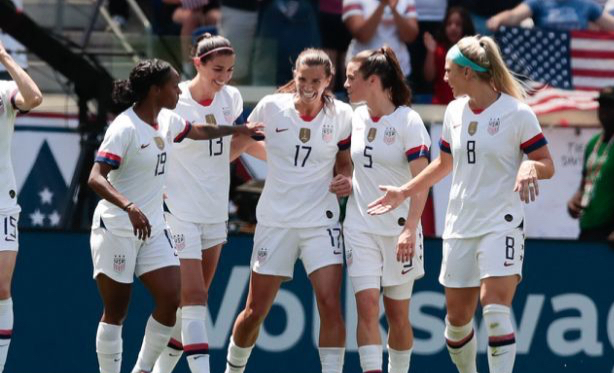 Tobin Heath, Mallory Pugh and Christen Press each scored to hand the USWNT a 3-0 triumph before heading to France for the FIFA Women’s World Cup.

Heath took advantage of miscommunication at the back for Mexico, breaking the deadlock after 10 minutes. A misplaced pass from Cecilia Santiago to Rebeca Bernal allowed Heath to pounce on the loose ball.

The winger slid past the defender and rifled a left-footed shot into the bottom-right corner. It was Heath’s 30th career USWNT goal in her 150th cap.

Santiago was the busier of the two keepers, keeping the USWNT out on several occasions. Crystal Dunn’s volley late in the half was poked over by the Club America keeper while she also denied Alex Morgan with a kick-save on a breakaway.

Carli Lloyd was one of five halftime substitutions by Jill Ellis and almost made an immediate impact. The Delran, N.J. native rounded Santiago but her low effort was cleared off the line by Rebeca Bernal.

Lloyd would not be denied later in the match, creating the USWNT’s insurance goal in the 77th minute. The midfielder raced into the box and drove a ball towards the front of goal, which Mallory Pugh bundled over the line. It was Pugh’s 16th career goal for the USWNT.

Press capped off the performance with her 48th career goal. The midfielder made no mistake with a wicked effort in the 88th minute.

Alyssa Naeher had zero trouble on the day, not making a single save in the clean sheet.

The USWNT heads into a short break before beginning group stage play in the World Cup against Thailand on June 11th.