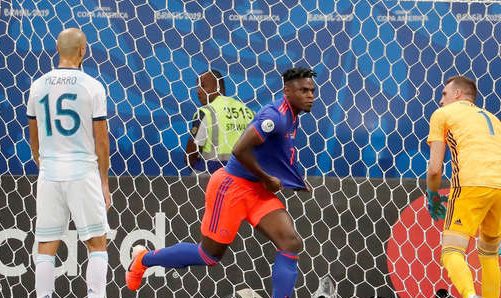 The first multi-match day of the 2019 Copa America kicked off on Saturday with one team claiming a full three points.

Group B sees Colombia in front after a 2-0 win against Lionel Messi and Argentina in Salvador on Saturday. Colombia used a game-winning goal from substitute Roger Martinez in the second-half, before Duvan Zapata added an insurance strike late.

Martinez raced down the left-wing before cutting back onto his right foot. The forward found the top-right corner to give the Colombians the breakthrough. Bournemouth man Jefferson Lerma set up Zupata for the nail in the coffin, as the big striker put away the midfielder’s cross past Franco Armani.

Messi was silenced for most of the night, seeing two free kicks saved by David Ospina, while also sending a header wide off a rebound.

The points were shared between Group A sides Venezuela and Peru as it finished in a 0-0 draw.

Video review was used 11 minutes in and went in favor of the Venezuelans. A free kick by Peru found its way into the net but Venezuelan goalkeeper Wuilker Farinez was fouled on the play.

Pedro Gallese’s first action came in the 23rd-minute as the keeper parried away Salomon Rondon’s effort.

Video review once again went in favor of Venezuela, this time in the second-half. Jefferson Farfan headed past Farinez but the play was ruled offsides after a short delay.

Venezuela was reduced to 10-men in the 75th-minute after Luis Del Pino was given a second yellow card for a challenge on Andy Polo. Farinez made two big stops the rest of the way to preserve the 10-men Venezuelans a point from the match.

Peru next takes on winless Bolivia while Venezuela takes on Group A leaders Brazil.