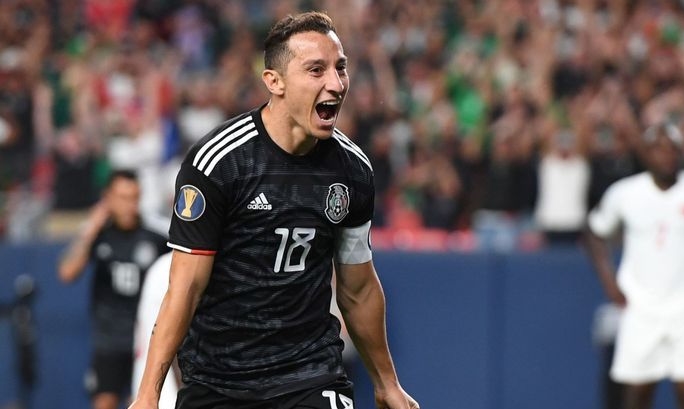 A pair of Group A favorites squared off on Wednesday night in Denver battling for the top spot.

Tata Martino’s Mexico clinched a knockout stage berth after a 3-1 win over Canada at Mile High Stadium. Andres Guardado scored a brace while Roberto Alvarado also found the back of the net.

Alvarado’s opener came 40 minutes in as he roofed a rebound into the top of the net for his first goal in the competition.

Guardado extended El Tri’s advantage in the 54th-minute with a beautiful strike from outside of the box.

ARE YOU KIDDING ME ANDRES GUARDADO?! 🚀🚀🚀

Lucas Cavalini pulled a goal back for Canada in the 75th-minute but it wouldn’t be enough as Mexico retained their two-goal advantage. Guardado put away Uriel Antuna’s assist for his second of the night.

Mexico are 2-0-0 and take on Martinique on Sunday, while Canada next faces winless Cuba.

Martinique remained alive in Group D after a comfortable 3-0 win over Cuba on Wednesday.

Kevin Fortune was man of the match after scoring one goal and adding two assists.

Joris Marveaux’s header in the 45th-minute put Martinique ahead before halftime as he finished Kevin Fortune’s cross into the bottom-right corner.

Fortune set up his side’s insurance goal in the 70th-minute as this time Stephane Abaul headed in from a corner-kick.

Erick Rizo was sent off in the 80th-minute after picking up his second yellow card for a foul on Fortune.

Fortune called his own number for the final goal of the game as he sent a low drive into the bottom-left corner.

Cuba finished with more possession but only had three shots on goal as they suffered their second defeat of the Gold Cup.