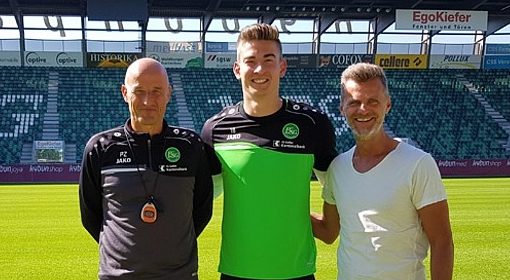 Jonathan Klinsmann has made a switch from Germany to Switzerland.

The 22-year-old German-American goalkeeper has joined FC St. Gallen on a two-year deal, the club announced on Tuesday. Klinsmann, the son of former U.S. Men’s National Team manager Jurgen Klinsmann, had been with Bundesliga side Hertha Berlin since 2017, but out of contract.

“After my two years of training at Hertha BSC, which has taken me forward enormously, my goals are clearly defined: I want to help FC St. Gallen each the Europa League and I want to become a regular goalkeeper as soon as possible,” Klinsmann said. “In addition, of course, I want to qualify for the Tokyo Olympics with the U.S. Olympic selection. I am proud to have signed a two-year deal with a traditional club and will give my all to get involved for the club.”

Klinsmann struggled to earn first-team minutes in Germany, making only one senior appearance. He mainly started for Hertha’s U-23 side. A move to St. Gallen will certainly boost his chances of consistent minutes as he hopes to be a part of the U.S. U-23 Men’s National Team. He’s made 32 appearance between the U.S. U-18, U-20, and U-23 MNT in his career.

“With Jonathan, we have signed a young, talented and ambitious goalkeeper,” Gallen chief executive Alain Sutter said. “With him and Dejan Stojanovic we are very well positioned and with a healthy rivalry necessary for this position as well as mutual support, both goalies can benefit enormously from each other.”