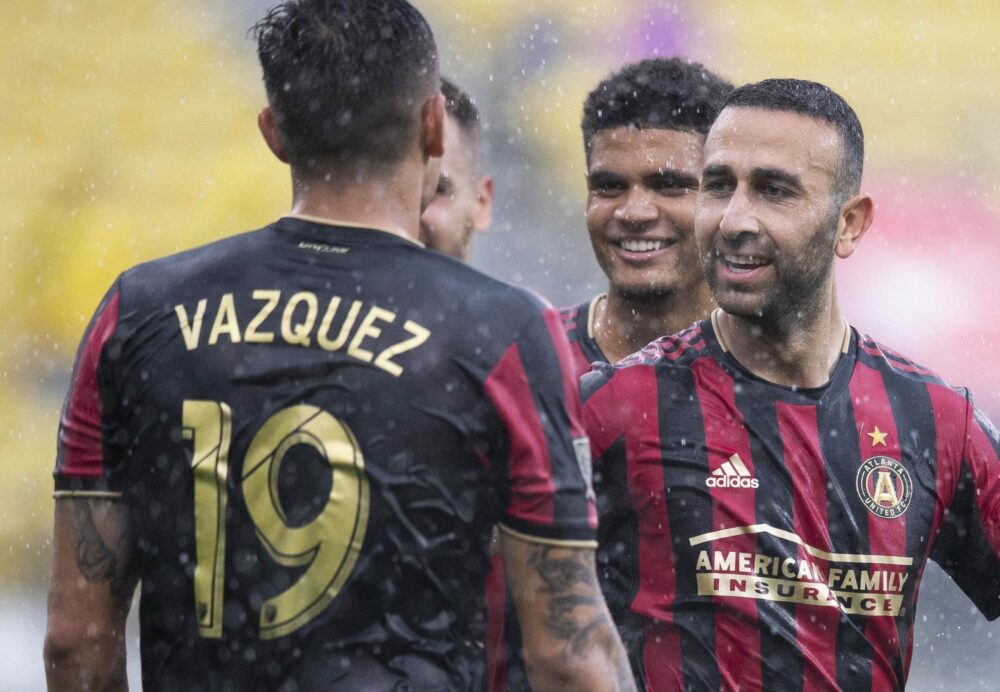 12 teams will try to pick up victories in midweek play before quickly rebounding for matches this coming weekend. A pair of familiar foes meet at BMO Field as struggling Toronto FC hosts Atlanta United. Greg Vanney’s men will try to snap their lengthy winless run against Frank de Boer’s side.

Elsewhere, the Portland Timbers travel to Stade Saputo for a date with the Montreal Impact. The San Jose Earthquakes close out the evening’s action with a home match against the Houston Dynamo. The Philadelphia Union face the New England Revolution away from home.

Two of MLS recent prominent sides will meet at BMO Field for the second time this league season.

Atlanta United will look for the season sweep of Toronto FC as Frank de Boer’s men have won their last four matches. The Five Stripes depth will be tested once again as Josef Martinez is away on international duty, and Ezequiel Barco is injured.

Brandon Vazquez will start at forward after scoring four goals in the last two U.S. Open Cup appearances for Atlanta. Julian Gressel may feature, but it isn’t expected as he just returned to full training this week.

Toronto FC’s last win came on May 4th and Greg Vanney’s men are sinking fast without several starters away with their National Teams. Jozy Altidore and Michael Bradley are gone, which means other players need to step up. A 3-0 loss to FC Dallas saw Alejandro Pozuelo come off the bench, but the Spaniard will need to start for TFC to get anything from this match.

For the only time in 2019, the Montreal Impact and Portland Timbers will meet in regular season play.

Remi Garde’s side will play host to the Timbers at Stade Saputo on Wednesday night. The Impact are sitting second in the East, a position where not many fans probably expected them with Ignacio Piatti missing a bulk of the season so far. Omar Browne, Samuel Piette, and Michael Azira are away on international duty so look for Saphir Taider to take the reigns in midfield.

Giovani Savarese’s side are quietly rising in the West and are on a good run of form after three-consecutive wins in all competitions. A 4-0 thumping of the Houston Dynamo at Providence Park last weekend saw Diego Valeri steal the show with a three-point night.

Valeri and Brian Fernandez have been two of MLS’ top players of late and will look to get after an Impact backline which has conceded the third-most goals in the Eastern Conference.

A pair of Western Conference rivals meet at Avaya Stadium as Matias Almeyda’s Earthquakes welcome the Houston Dynamo to town.

Five points separate these teams in the table and the Earthquakes will look to get revenge for a loss earlier this season. A dynamic attack of Chris Wondolowski, Magnus Eriksson, and Cristian Espinoza will look to add to their combined total of 12 goals this season.

Houston fell flat against the Timbers in Portland on Saturday but have a chance for some points on the road during their three-match trip. Depth will be important for Wilmer Cabrera’s side who are missing a handful of guys due to international tournaments. Mauro Manotas will be available to start after being an unused substitute against Portland, while Tomas Martinez and Ronaldo Pena are also options.