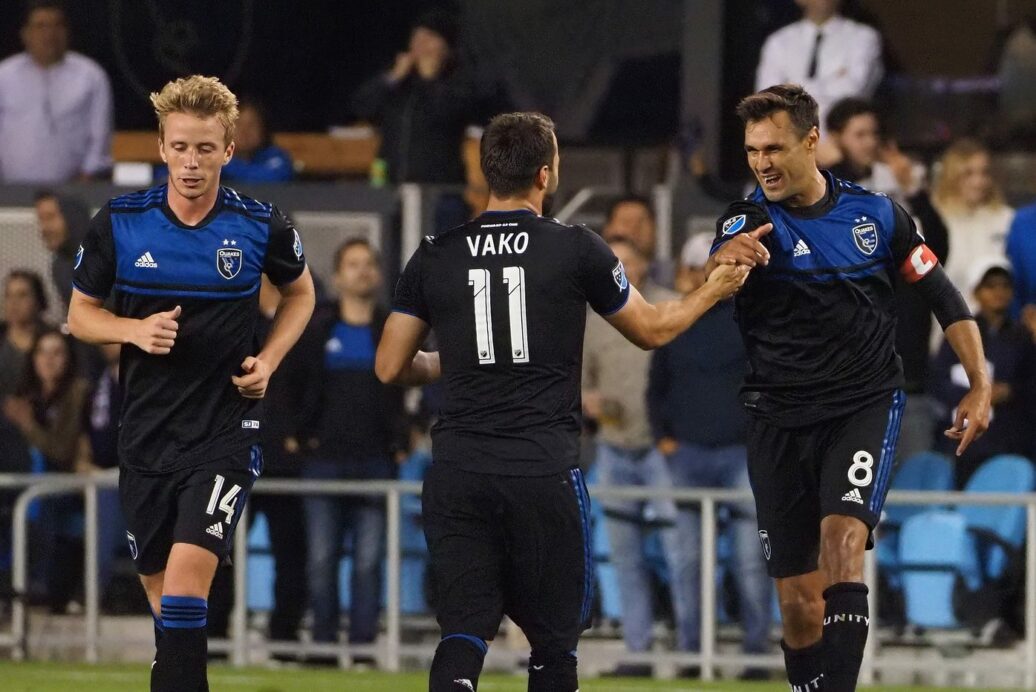 The latest installment of the California Clasico will feature a San Jose side on a good run of form against a Galaxy squad that has won three of four matches.

The Seattle Sounders and Vancouver Whitecaps renew their Cascadia rivalry at CenturyLink Field, with the Sounders short-handed and slumping, and the Whitecaps on a six-match unbeaten run, though five of those six have been draws.

The Eastern Conference-leading Philadelphia Union take the short trip up I-95 to visit Yankee Stadium and face an NYCFC side riding a league-best 10-match unbeaten streak in league play.

Here’s a closer look at this weekend’s top MLS matches:

The first California Clasico takes place on Saturday as both sides currently try to inch up the top six in the Western Conference.

Matias Almeyda’s Earthquakes are riding a five-match unbeaten streak in league play, earning points against the Houston Dynamo, FC Dallas, and D.C. United of late. While Chris Wondolowski and Magnus Eriksson will be the likely sources of goals, Valero Qazaishvili is coming off a brace on Thursday.

The second-place Galaxy take the trip to Avaya Stadium with three clean sheet wins out of their last four matches. Favio Alvarez is finding a nice run of form himself, with two goals in his last three league appearances and Zlatan Ibrahimovic is always a threat in front of goal.

With Harold Cummings and Nick Lima away on international duty, the Quakes will need some bold performances from their defenders against the Galaxy’s forwards.

Yankee Stadium will play host to a battle of two Eastern Conference rivals on Saturday night.

NYCFC welcomes the first place Philadelphia Union to town, looking to hand Jim Curtin’s side their first loss in the second-half of the season. Domenec Torrent will be without the playmaking ability of Heber who is injured, so look for Maxi Moralez and Alexandru Mitrita to be the sources of efforts towards goal.

The Union fought back for a point in Foxborough on Wednesday night, tying Bruce Arena’s New England Revolution 1-1. Kacper Przybylko netted his team-high fifth goal of the season after a great effort from Fafa Picault. It was a sloppy performance by the Union, who will try to exact revenge against NYCFC who ousted them from the playoffs last season.

The lone MLS match on Sunday night will be at Providence Park as the Portland Timbers host FC Dallas.

Nine points separate these sides in the West table as Portland tries to rebound from a midweek loss. A 2-1 loss in Montreal saw many starters rested for the Timbers including the likes of Brian Fernandez and Diego Valeri. The pair will try to help Giovani Savarese’s side hit the 20-point mark this season with a win at home.

FC Dallas sits fourth in the West after seeing a two-goal lead slip in against Vancouver on Wednesday. The return of Paxton Pomykal and Brandon Servania has helped in midfield, but defensively they need to be able to finish games out. Matt Hedges and Reto Ziegler are the players who will have tough tasks on Sunday.

Conor Casey’s side may be bottom in the West, but don’t tell them that as they are riding a six-match unbeaten run in league play. Offensively the team has been receiving contributions from numerous players of late including Andre Shinyashiki, Nicolas Mezquida, and Diego Rubio. Defensively they will need to stand firm against several attacking talents on the opposite side of the field.

Bob Bradley’s LAFC are on an eight-match unbeaten run of their own with recent wins over the Montreal Impact and Portland Timbers. Carlos Vela has continued to shine for the West leaders while Latif Blessing and Adama Diomande try to contribute on the road as well.

LAFC blanked the Rapids in both regular season meetings in 2018.

The defending MLS champions return home on Saturday to welcome the Montreal Impact to town.

Frank de Boer’s side lost 3-2 in Toronto on Wednesday and will try to rebound against a surprisingly good Impact side. Brandon Vazquez will continue to lead the line with Josef Martinez not back from international duty. Julian Gressel and Pity Martinez will be the creators in midfield as Ezequiel Barco is injured.

Remi Garde’s Impact made it back-to-back wins over Western Conference competition and now face a tough trip to Mercedes-Benz Stadium. With several players missing, the chances will fall for the likes of Maxi Urruti, Saphir Taider, and Orji Okwonkwo. The trio has 12 goals and seven assists between them this season.

Here’s a full schedule of this week’s action: