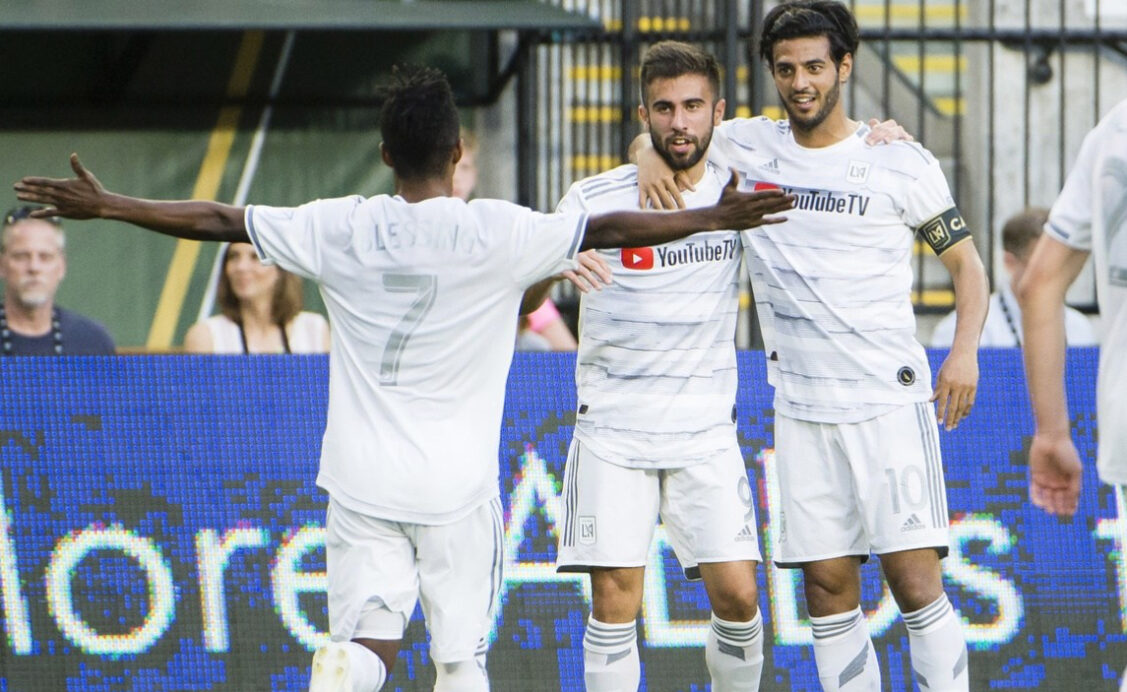 It was a busy day in Major League Soccer on Saturday with the league leaders picking up the result of the evening.

Bob Bradley’s LAFC held on for a 3-2 triumph at Providence Park against the Portland Timbers. Carlos Vela was on the scoresheet again but it was Latif Blessing whose goal proved to be the winner.

Josef Martinez continued his hot run of form with a brace for Atlanta United, the New York Red Bulls rolled past Real Salt Lake, and FC Dallas ended a lengthy winless run with a slim victory over Seattle.

Orlando City earned their first shutout win since April 20th with a 3-0 success over the Montreal Impact.

It was a dominant first-half by the Lions who tallied all three goals in a 15th-minute span. Nani’s 27th-minute penalty broke the deadlock at Stade Saputo before Tesho Akindele’s close-range finish added to the visitors advantage.

Will Johnson ended the scoring in the 42nd-minute with a header past Evan Bush.

The Impact only recorded one shot on goal in the home loss.

Atlanta United made it back-to-back wins and Josef Martinez continued his recent scoring streak in a 2-0 win over Chicago.

The Venezuelan’s first came in the 12th-minute after a through ball assist from Pity Martinez allowed the striker to go on towards goal.

Martinez netted his fourth goal in a four-day span, rifling a right-footed shot past Kenneth Kronholm before halftime.

Brad Guzan made three saves in the clean sheet.

All four goals came after halftime and started from an own-goal from RSL’s Marcelo Silva in the 58th-minute.

Daniel Royer was assisted by Kaku a minute later to extend the hosts lead. Michael Murillo’s first goal since April 2018 continued the hosts onslaught ahead of Omir Fernandez’s right-footed finish in the 83rd-minute.

The loss was RSL’s second in a four days.

NYCFC hit back twice at Mafpre Stadium to earn a 2-2 draw against the Columbus Crew.

Heber finished off Maxi Moralez’s assist in make it 1-1 before the hour mark. Pedro Santos retained the lead for the Crew just four minutes later but again Domenec Torrent’s would fight back.

Valentin Castellanos’ long-range shot would steal a point for NYCFC.

Zack Steffen made two saves in his final home match for the Crew ahead of his move to Manchester City.

The points were shared at Audi Field as D.C. United hit back for a 1-1 draw against the San Jose Earthquakes.

Luciano Acosta’s fifth goal of the season earned Ben Olsen’s side a point after being down in the first-half.

Chris Wondolowski headed the Quakes in front after 37 minutes for his seventh goal of 2019.

The sides were level late in the second-half but it was the hosts who pulled away with two goals in the final 17 minutes.

Kekuta Manneh canceled out Andre Shinyashiki’s opener but Nicolas Mezquida and Diego Rubio each tallied to seal the win.

Mezquida right-footed finish in the bottom-right corner put the Rapids back in front before Rubio’s header sealed the Rapids’ 10th points out of a possible 12 during this span.

A pair of Western Conference sides had to settle for a point apiece in a 1-1 draw at BBVA Compass Stadium.

Alberth Elis’ right-footed strike helped the Houston Dynamo hit back against Sporting KC to earn a point. It was the Honduran’s fifth goal of 2019 and it came six minutes after SKC broke the deadlock.

Yohan Croizet put SKC in front but ultimately the team did not create much outside of that. Johnny Russell did not play and the team finished with one shot on goal.

FC Dallas ended a lengthy winless run as they defeated the Seattle Sounders 2-1 at home.

A pair of Seattle own goals propelled Dallas to the win as Xavier Arreaga and Brad Smith were the unfortunate souls to see balls ricochet off them and past Stefan Frei.

Raul Ruidiaz’s long-range missile pulled the Sounders to within one after the hour mark, but it was the closest they would get.

The visitors led 2-0 at halftime after Carlos Vela and Diego Rossi each found the back of the net.

Cristhian Paredes pulled a goal back for the Timbers quickly into the second-half, but Latif Blessing retained the advantage for LAFC in the 54th-minute.

Brian Fernandez made the final few minutes interesting with his strike but LAFC would run out with the win.