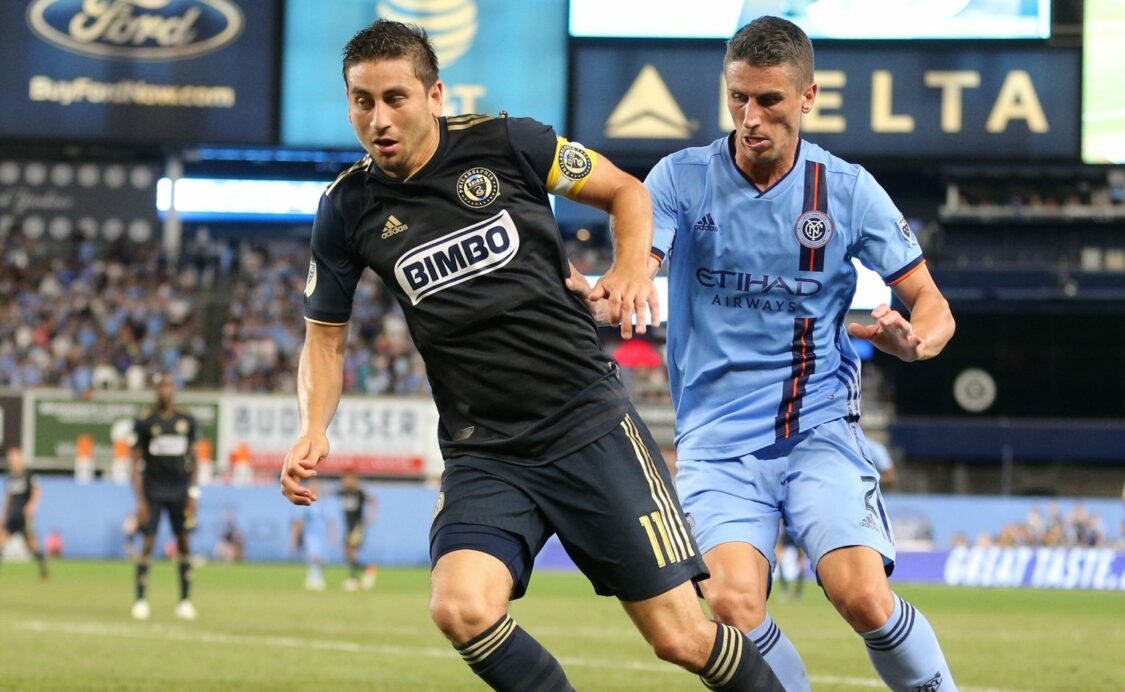 New York City FC sent a big message to the rest of the Eastern Conference on Saturday by knocking off Conference leaders, the Philadelphia Union, while the San Jose Earthquakes topped the L.A. Galaxy in the latest California Clasico to headline the day’s busy MLS schedule.

NYCFC pushed its unbeaten run to 12 matches by posting a 4-2 win against the Philadelphia Union, halting the Union’s four-match unbeaten run. The loss also helped several teams cut into the Union’s lead atop the East, which is down to just one point now.

In the West, San Jose pushed its own unbeaten run to six matches after beating the LA Galaxy, 3-0. The Seattle Sounders also stole three points late against the Vancouver Whitecaps.

The Philadelphia Union’s woes at Yankee Stadium continued on Saturday night after a 4-2 loss to NYCFC.

Jim Curtin’s side led 2-1 at the halftime break after Fafa Picault and Kacper Przybylko each scored, while Maxi Moralez’s first goal of the night came in between the visitors finishes.

Moralez leveled the match from the penalty spot in the 55th-minute after Alejandro Bedoya fouled Valentin Castellanos.

Castellanos called his own number later in the half to put the hosts ahead 3-2 after 71 minutes. His long-range shot beat Matt Freese to the bottom-left corner before he iced the win with his second goal of the night.

Moralez played Castellanos in with a through ball and the Argentine made zero mistake in front of goal.

The Union are only a point clear of D.C. United for top spot in the East, while NYCFC are sixth.

Minnesota United snapped a three-match losing streak in a major fashion with a 7-1 beatdown of FC Cincinnati at Allianz Field.

The Loons put the game out of reach by halftime, scoring four goals in a 25-minute span before halftime. Ike Opara’s close-range finish from a set piece broke the deadlock ahead of Hassani Dotson’s long-range missile five minutes later.

Darwin Quintero assisted on Ethan Finlay’s finish in the 30th-minute to continue the onslaught in St. Paul. Angelo Rodriguez bagged his fifth goal of the season later in the half, with Quintero again assisting on the play.

Emmanuel Ledesma pulled a goal back for FC Cincy after the halftime, but the Loons would tally three more goals for good measure.

The Loons are sixth in the West while FCC remain bottom of the league.

With several players still missing, it was Justin Meram’s time to shine for Atlanta United.

The Iraqi midfielder scored his first two goals for the club in a 2-1 triumph over the Montreal Impact at Mercedes-Benz Stadium.

Meram’s opener came from a long-range finish in the 35th-minute. Pity Martinez was credited with the assist on the playmaker’s first goal of the season.

The Impact hit back though after halftime as centerback Zakaria Diallo finished from close-range after a corner kick.

Meram capped off a busy half for the Five Stripes, finishing Brek Shea’s assist for his second goal of the night.

Montreal struggled to create much on the night, eventually suffering their second loss out of their past five league matches.

Orlando City rebounded with a 2-0 road win at Mafpre Stadium over the Columbus Crew.

The Lions scored goals in each half to earn the three points with Chris Mueller and Tesho Akindele each getting on the scoresheet.

Mueller’s fourth goal of the season came before halftime as Nani assisted on the forward’s right-footed strike into the bottom-corner.

The Portuguese playmaker set up Akindele’s finish in the 66th-minute, while the Canadian beat Jon Kempin from outside of the box.

Since April, the Crew have now lost 10 league matches which certainly has Caleb Porter on the hot seat. Columbus sits second from bottom in the East while Orlando City are in eighth.

Bruce Arena earned his first home win as New England Revolution head coach as his side defeated the Houston Dynamo 2-1 at Gillette Stadium.

Darwin Ceren broke the deadlock for the Dynamo in the 25th-minute, but the Revolution would fight back to steal three points at home.

Diego Fagundez set up Antonio Delamea in the 51st-minute from a corner-kick, allowing the defender to head home his first goal since 2017. After the sides traded chances through the remainder of the match, the hosts got a late winner from Teal Bunbury.

Bunbury got on the end of Cristian Penilla’s assist and sealed the comeback which sees the Revs move to ninth place. The Dynamo dropped to seventh after their third-consecutive loss.

D.C. United stole a point at home in the dying moments against Toronto FC on Saturday night.

Wayne Rooney’s 92nd-minute penalty kick equalizer gave the Black and Red their fourth draw out of the past five matches. Frederic Brillant was fouled by Ayo Akinola and after video review, D.C. United were rewarded the penalty kick.

Former D.C. United midfielder Nick DeLeon scored in front of his former fans to hand Greg Vanney’s side a lead after 19 minutes. However, TFC was unable to hang on for what would have been their second-consecutive league win.

Bill Hamid made four saves for D.C. while Quentin Westberg was three for TFC.

D.C. United are in second place while TFC sit seventh.

Real Salt Lake ended a four-match losing streak in all competitions to down Sporting KC 2-0 at home.

Sam Johnson continued his strong debut season in MLS with a brace in the opening half. His first goal came 15 minutes in as he got on the end of Kyle Beckerman’s corner-kick and scored past Tim Melia.

RSL used their counter-attacking abilities on their second goal as Johnson this time finished a fast break pass from Damir Kreilach for his seventh goal of the season.

SKC continued to struggle in front of goal, only recorded three shots on target in the road loss.

Kelvin Leerdam’s finish in the 96th-minute handed Brian Schmetzer’s side a needed win on home soil.

Both teams combined for 13 shots on goal while the Whitecaps will feel hard done by as Yordy Reyna hit the post after halftime.

The Sounders are in third while the Whitecaps sit in ninth.

The first Cali Clasico went in favor of the San Jose Earthquakes at Avaya Stadium.

Valeri Qazaishvili scored the opening goal while Shea Salinas and Tommy Thompson each added insurance goals in the final moments of a 3-0 success.

Qazaishvili made it three goals this week as he rifled home from long-range, beating David Bingham after 11 minutes.

Both teams had ample opportunities to score as the match went on, but San Jose had to wait late for insurance. Salinas finished Qazaishvili’s assist in the 82nd-minute to pad the lead before Thompson added a strike three minutes later to cap the result at 3-0.

Daniel Vega made six saves in the home success for Matias Almeyda’s side.