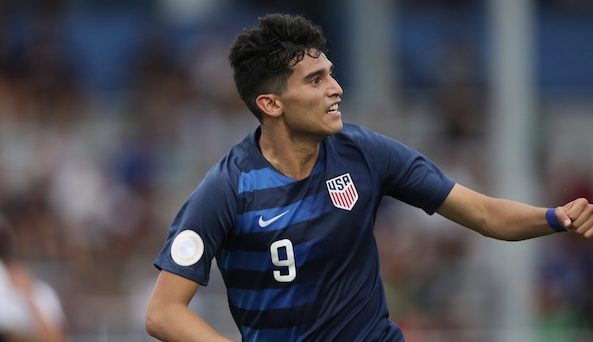 16-year-old Ricardo Pepi has been signed to a Homegrown contract by FC Dallas.

The club announced the signing on Friday, as Pepi became the 26th homegrown signing in FC Dallas’ history. He recorded his first assist for the club back on June 12th in the U.S. Open Cup against OKC Energy FC.

Pepi currently has seven goals scored with North Texas SC of the USL and is the first player to sign with FC Dallas from the USL League One development pathway.

The forward is eligible for both the U.S. and Mexico National Teams and appeared for the U.S. U-17’s in the 2019 Concacaf U-17 Championship.

After being linked with the club since February, Scottish winger Gary Mackay-Steven is reportedly set to join NYCFC.

Sky Sports Scotland tweeted on Friday that Mackay-Steven was in Manchester on Friday undergoing a medical for the Eastern Conference club. Mackay-Steven was also on the radar of English third-tier side Portsmouth but looks to have chosen MLS as his next destination.

Gary Mackay-Steven will undergo a medical for New York City on Friday in Manchester.

Derek McInnes this morning admitted the player is likely to leave @AberdeenFC but hopes there's still a chance he will stay at Pittodrie. pic.twitter.com/loMdhyxvZq

In 72 appearances with Aberdeen, Mackay-Steven scored 16 goals for the club. Injuries cut the Scotman’s season short in 2018-19 after suffering a concussion in December before injuring his ankle against Rangers in January. His last appearance came on Feb. 23rd against St. Johnstone.

Dominant with his left foot, Mackay-Steven can play on either wing and will give Domenec Torrent another option offensively.

Gabriel Somi’s time with the New England Revolution has come to an end.

The club announced on Friday that both parties mutually agreed to part ways. Somi, a dual citizens of Syria and Sweden, joined the Revs in Jan. 2018 and appeared in 14 matches for the club.

During his time in Foxborough, Somi totaled over 1,400 minutes and recorded two assists.

Bruce Arena’s side returns to league play on June 26th when it hosts the Eastern Conference-leading Philadelphia Union.

Kortne Ford will play no part in the remainder of the 2019 MLS season.

The Colorado Rapids announced on Friday that Ford underwent a successful surgery on Thursday to fix his Tib-Fib joint and to repair a medial meniscus tear. Due to the injuries, Ford will miss the rest of the 2019 season, but is expected to return for preseason in 2020.

“This has been a disappointing and frustrating year for Kortne but we know with his commitment and determination he will get back on the field for this club. We will be with him every step along the way and everyone’s focus is on getting him ready for 2020,” Rapids EVP & GM Padraig Smith said.