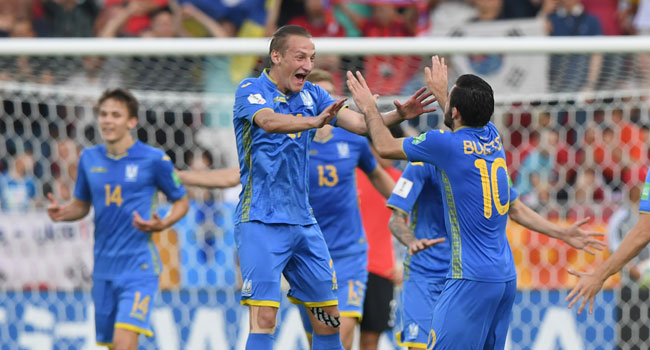 In a chaotic final which featured over 25 fouls and four goals, Ukraine was able to survive a late push from South Korea to win the 2019 FIFA U-20 World Cup.

A brace from forward Vladyslav Supriaha and a late goal from midfielder Heorhii Tsitaishvili were enough to reverse a South Korean lead, giving Ukraine a 3-1 win and its first U-20 World Cup title.

The match was frenetic from the first minute, with the teams combining for an exciting four-goal affair.

After only five minutes of play South Korea opened the scoring through a penalty kick finished by forward Kang-In Lee.

Ukraine found an equalizer in the 34th-minute, capitalizing on a poorly-cleared free kick by South Korea. Chaos ensued in the six-yard box before Supriaha tied things up.

Supriaha’s good fortune would continue as he scored his second goal of the game to extend Ukraine’s lead to 2-1 after 51 minutes.

A wonder-save by Ukraine’s ‘keeper’ Andriy Lunin kept South Korea from leveling the score in the 70th minute. Lunin was called on often as Ukraine had to withstand a late surge from South Korea’s impressive attack.

Ukraine put the nail in the coffin in the 89th minute as Tsitaishvili scored to put the match out of reach.

Ukraine’s path to the final was indicative of their ultimate success. Ukraine won Group D, beating the USA (2-1) and Qatar (1-0) in its first two matches and drawing with Nigeria (1-1) on Matchday 3.

Ukraine had a strong knockout round showing, easily defeating Panama (4-1) in the Round of 16. They combined impressive victories over Colombia and Italy to get to the finals.

Supriaha scored two goals in the U-20 World Cup final, including what would be the game-winning goal. His energy and prowess in the Ukraine attack played a large part in their win on Saturday.

Tsitaishvili’s goal to ice the game in the 89th-minute was massive. The fans knew, and the players knew, that Ukraine would be crowned champions.

Although he was not necessarily at fault on all three of Ukraine’s goals, this loss is probably hitting South Korea goalkeeper Lee Gwang-Yeon the hardest. Letting up three goals in a final is always tough.