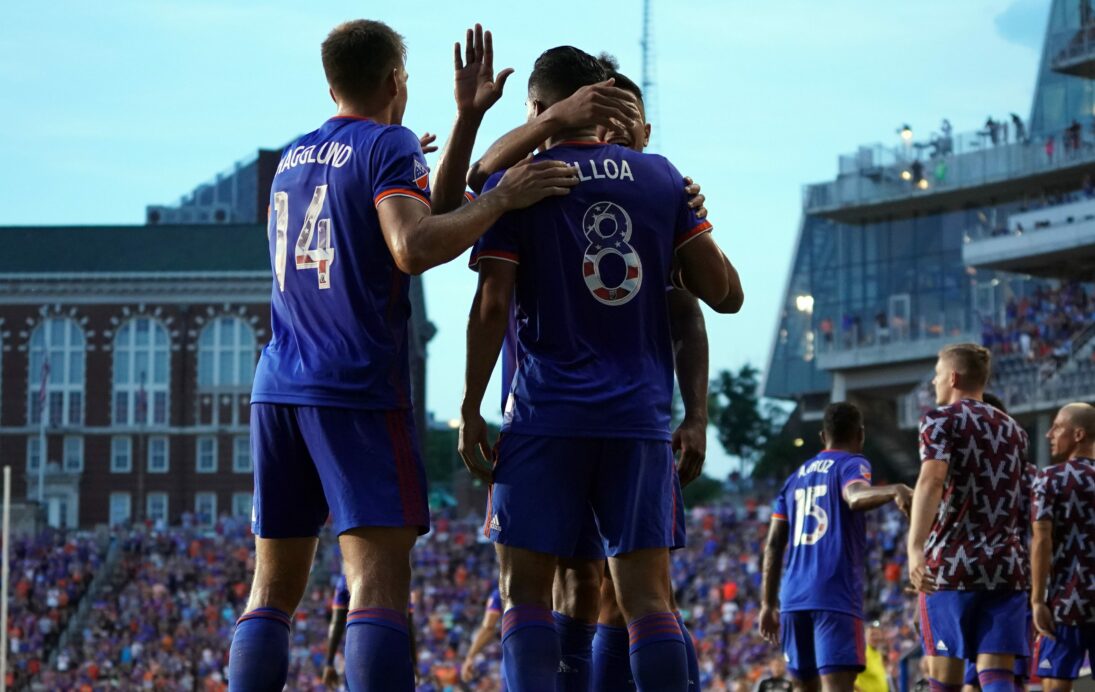 CINCINNATI, OH – A full 56 days had passed since FC Cincinnati last found itself in the win column in MLS play. The span saw a six-game winless skid end in Saturday night’s 3-2 victory in the expansion side’s first-ever meeting with the Houston Dynamo.

It was a win by committee thanks to goals from Kekuta Manneh, Rashawn Dally, and Victor Ulloa. Manneh now finds himself leading the team with three goals to his credit, while Ulloa earned his first of the season.

Dally’s tally though, was perhaps the most significant moment of the evening as his contribution was good for his first in MLS action in just his third-ever start while standing in for Fanendo Adi, whose status is often unknown. The 22-year-old Quinnipiac product finished a chance that was set up by defender Mathieu Deplagne.

“I was ready for anything and then once [Deplagne] won it back. I just got into a position and then made a quick run and then he played a great ball to me. I was glad I was able to finish it and get my first goal,” Dally said.

“I’ve been in that situation many times in training so I wasn’t surprised, I just wanted to do all the right things and keep my eyes on the ball and know where the goalie was and place it into the corner.”

For Cincy, the win was looking pretty, right up until it wasn’t.

Though the team obviously has plenty of positives to walk away from Saturday with, the reality is a conceded penalty and own goal in the 79th and 81st minutes, respectively had fans concerned about the team’s ability to see out the win after showing a bit of style up until Houston was on the board.

“I think there was kind of two games in the game. The first half, I think we showed up very, very strong. Started again very, very well, paced ourselves. It was very visible in the first half.” interim head coach Yoann Damet said.

You have to go all the way back to March 24th in New England to find Cincy’s last clean sheet. While the goals were cheaper than Damet would prefer, he’s happy with how the team closed out and held on to a much needed three-point affair.

“I think it showed a lot of character. We can assess that also as we gave up space, we gave up time at the end of the second half, but we can also speak of the character that the guys showed to stay strong,” he said.

“It’s unfortunate to consider. A PK, which is a PK. We need to stand up when we need to defend. The second goal is an own goal.”

The win puts a positive cap on a week swirling with rumours about Cincinnati’s imminent head coach to be. With the club’s newly appointed GM, Gerard Nijkamp indicating that there’s now only one candidate and the hire may be on the horizon, too, the evening puts a positive cap on Damet’s interim tenure at the helm of the expansion side if it’s indeed his last game in charge for the time being.

“This season is going to be a tough one,” Damet said. “A lot of adversity in front of us, we knew it. And tonight was a big moment for us to manage and the guys showed they can manage difficult moments and adversity. So, I’m really happy about that.”

Still in the cellar of the Eastern Conference, FC Cincinnati moves to 4-2-13 on the season. Next on the docket for the expansion side is a road trip to SeatGeek Stadium, visiting Chicago Fire on Saturday, July 13th.