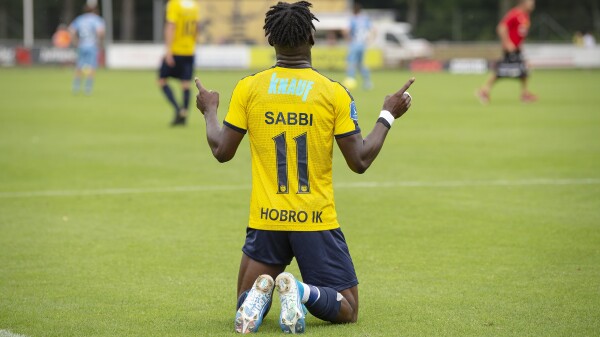 Emmanuel Sabbi has picked up where he left off last Danish Superliga season for Hobro.

In his first three matches this season, Sabbi has two goals and one assist to his name as Hobro try to avoid a relegation battle in 2019-20. Sabbi has been linked to a move away from Hobro this summer which has also forced club sporting director Jens Hammer to start being realistic about the U.S. U-23 prospect staying.

“I don’t think we keep him, and if I was in a big club in Denmark, I would have taken him. He is not a finished product yet, and can play at a high level,” Hammer said. “Some people have rated him as worth $10 million, but I also would like to sell him for less.”

“There is interest in him, and the transfer window works for us, because people come and watch our matches, and he delivered at a really high level against Randers until he unfortunately had to change his style because he got some knocks along the way.”

The 21-year-old’s numbers increased in 2018-19, scoring eight goals including three in the Danish relegation playoffs. He made 31 appearances in all competitions while also adding three assists for the club.

Sabbi has made two appearances for the U.S. U-23 Men’s National Team, but has yet to crack Gregg Berhalter’s senior squad. Brondby and Maccabi Haifa have reportedly bid for his services earlier this summer, only to be turned down by Hobro.

“My hope is that Hobro will agree with another club,” Sabbi said in an interview with Bold earlier this summer. “The time is certainly the right one for me to try something new.

“I hope Hobro will get a bid, they will be happy with and let me switch to a good club that likes me as a type. Right now I just hope to have the opportunity to play at as high a level as possible. If a large Danish club turns, it will be something I want to think about. I can do nothing but wait to see if Hobro agrees with another club. We must see what happens.”

Hobro are currently unbeaten to start the season with three consecutive draws, as Sabbi has two goals and one assist. They face Silkeborg on Friday in their next league match.