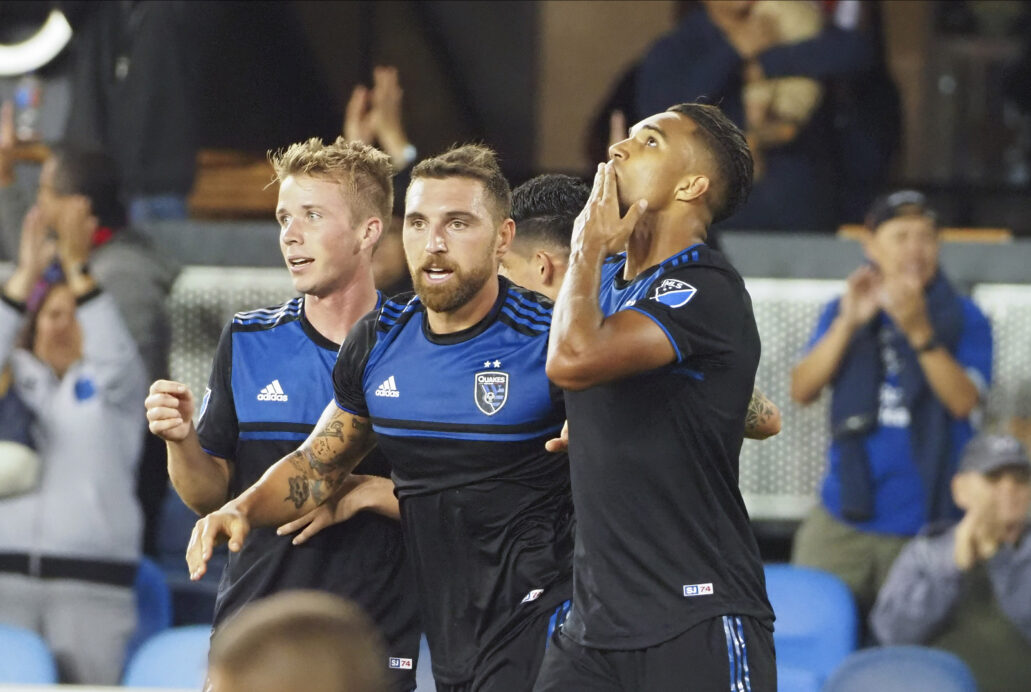 The first game of the evening saw Bruce Arena’s New England Revolution maintain its positive momentum, but let a late lead slip away as D.C. United stole a late point.

Out west, LAFC broke up the Houston Dynamo’s unbeaten run on home turf in a thorough come-from-behind performance to extend its lead over the Western Conference.

The San Jose Earthquakes took down the L.A. Galaxy for the second time in 15 days in the final regular season Cali Classico matchup.

It was a true tale of two halves at Audi Field in Washington, D.C. After taking and piling onto an early lead, the New England Revolution were looking good.

With a 2-0 lead after Teal Bunbury’s rocket and Charles Gil’s cheeky ricochet cleanup, the Revs looked to be on their way to earning a third-consecutive win. D.C. pulled one back just before the half when Paul Arriola dropped a dime for an isolated Leonardo Jara, who converted from close range for his first career MLS goal.

After picking up a yellow in the 49th minutes, Revs’ midfielder Wilfried Zahibo got himself booked again and sent off in the 63rd.

With a decent bit of time to enjoy the one-man advantage, it took until the 86th minute to find the equalizer. Quincy Amarikwa finished off a Wayne Rooney free-kick beating the New England line and goalkeeper Matt Turner from point blank.

While the Revs will be disappointed to drop points, the result moves their unbeaten streak to eight and are back in the mix in the Eastern Conference playoff race. D.C. remains in second.

Putting its undefeated home league record at BBVA Compass Stadium on the line, the Houston Dynamo played host to LAFC who didn’t need Carlos Vela to spoil the evening and pick up its third league win in a row.

Wasting no time, Romell Quioto got things going at the third minute for the Dynamo. It seemed as though Houston had plenty for the Western Conference leaders as they created chance after chance in the opening minutes, but a trio of missed opportunities would come back to haunt as the pendulum swung to the visitors.

Striker Adama Diomande responded at the death of the first half rising above the Houston defense and putting a header into the net. Lee Nguyen and Diomande connected again in the 49th minute. This time, on the ground Nguyen found Diomande in the box for another point-blank finish. The Diomande brace puts his goal tally at six on the campaign.

LAFC sealed the deal in the 88th minute when Diomande and Josh Pérez fought through traffic to find Diego Rossi who finished with a spectacular chip shot past Dynamo goalkeeper Joe Willis.

The second edition of Cali Clasico was held at Dignity Health Sports Complex in Carson, California with the home team failing to avenge the 3-0 loss from a couple of weeks ago.

Galaxy defender Rolf Feltscher beat Quakes keeper Daniel Vega to the ball from the corner, coming down on the ball with his right foot for his first goal of the season. While it looked like Galaxy were off and running, the Earthquakes amassed 10 corners and 14 shots in the first half and were unlucky to not find an equalizer until the 61st minute.

Still hammering away in the second half, The Earthquakes were finally rewarded when Valeri “Vako” Qazaishvili found the equalizer from distance. Vako was involved again moments later, this time in the assist column when he found Danny Hoesen to double the lead. Hoesen was on the field for less than two minutes prior to the strike.

Quakes defender Marcos Lopez, who was carrying a suspension under next caution picked up a one-game suspension after taking a yellow in the 68th minute.

Jackson Yueill iced it in the 85th minute, finishing a ricochet and San Jose took the sweep in the regular season Cali Classico as they continue to rise through the Western Conference ranks under Matias Almeyda.