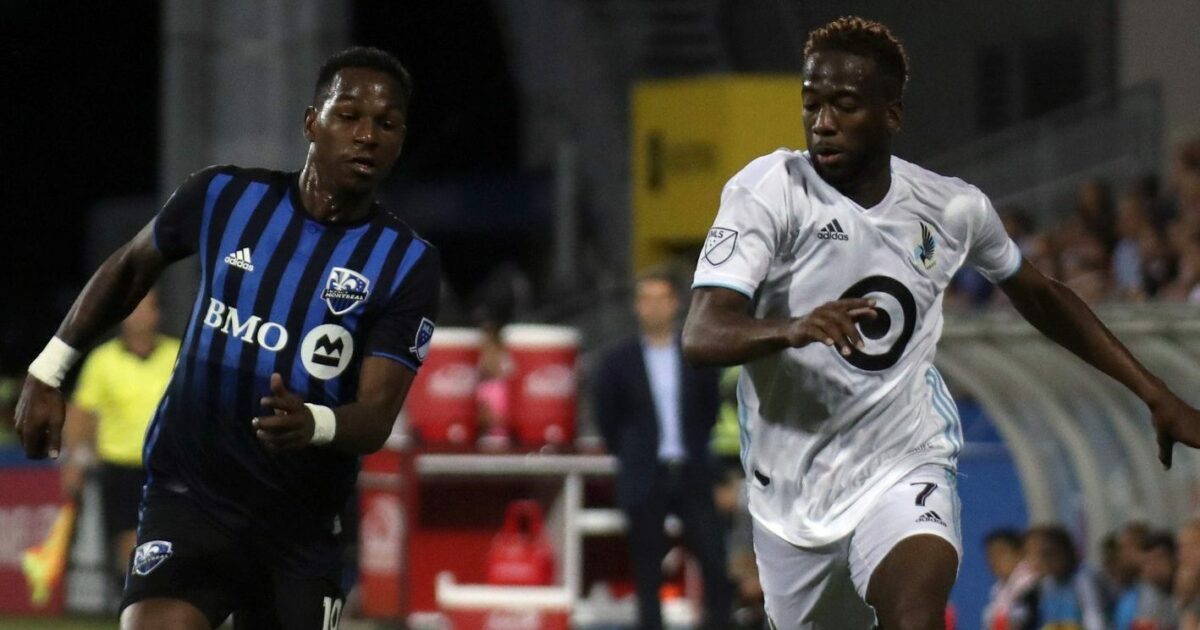 Major League Soccer’s summer schedule continued on Saturday with six matches on tap and one match postponed due to inclement weather.

Minnesota United picked up an important three points at Stade Saputo, downing the host Montreal Impact 3-2 in comeback fashion. Mason Toye scored a brace for Adrian Heath’s side while Kevin Molino recorded a pair of assists.

Elsewhere, FC Cincinnati picked up their first win since May 11th with a 3-2 success over the Houston Dynamo while the Seattle Sounders edged the Columbus Crew 2-1 at Mafpre Stadium. The Philadelphia Union’s scheduled home match with Orlando City got moved to Sunday due to thunderstorms.

FC Cincinnati rolled to a 3-0 lead before letting the Houston Dynamo make the final minutes interesting at Nippert Stadium. Yoann Damet’s side eventually hung on for three points in a 3-2 success over their Western Conference visitors.

Kekuta Manneh and Rashawn Dally scored nine minutes apart in the opening half to give the hosts a two-goal halftime cushion. Manneh was played in by Emmanuel Ledesma before capping a fast break, ahead of Dally’s first MLS goal in the 38th-minute.

Victor Ulloa extended the hosts lead with a missile into the center of the goal, with Ledesma picking up his second assist of the night.

Romell Quioto pulled a goal back from the penalty spot in the 79th-minute ahead of Nick Hagglund’s own goal two minutes later.

FC Cincy would hang on to hand the Dynamo their fourth defeat in the past five league matches.

The Seattle Sounders ended a two-match road trip on Saturday with a 2-1 win at Mafpre Stadium.

Nicolas Lodeiro scored twice for Brian Schmetzer’s side which erased an early goal from Crew midfielder Pedro Santos. Santos slotted home from the penalty spot in the 13th-minute after Danny Levya fouled the Argentine a minute prior inside of the box.

Seattle would equalize with a penalty kick of their own in the 56th-minute, as Lodeiro finished after drawing a foul from David Guzman. It was the midfielder’s third league goal of the season.

With ten minutes of second-half stoppage time, the Sounders made the most of it as Lodeiro headed in the winning goal in the 96th-minute. The Crew continued to struggle in front of goal, only recording two shots on target out of nine shots in total.

Seattle are in third while the Crew sit in 11th.

Make it three-consecutive wins for Minnesota United as the Loons came back to down the Montreal Impact 3-2 at Stade Saputo.

It was a fast start in Canada as the sides combined for three goals in the opening 13 minutes. Anthony Jackson-Hamel scored a minute into the match before Mason Toye’s chipped finish past Evan Bush leveled the score 1-1 after nine minutes.

The Impact would retake the lead in the 13th as Rudy Camacho finished in front of goal from a corner kick.

Ethan Finlay made the most of a VAR situation before halftime, scoring from the penalty spot in stoppage time. Kevin Molino connected with Toye again after the break, this time finding the forward who netted his third league goal of 2019.

Vito Mannone made four saves for the Loons who are fourth place in the West after Seattle’s win. The Impact miss a chance to move to second place in the East after the home loss.

Sporting KC earned their first home win since May 26th after a 1-0 success over the Chicago Fire.

Yohan Croizet scored a missile in the 14th-minute which ended up being the lone goal of the match. Kenneth Kronholm could do nothing with the effort as he was beaten to the bottom-left corner.

Sporting KC owned possession as well as shots on target, outshooting the Fire 10-to-2.

Dax McCarty and Nemanja Nikolic each were denied by Tim Melia who had little to do on the evening. Kronholm kept his side in it with nine saves, but his teammates could not find an equalizer as they slumped to their third loss in the past five league matches.

SKC are in ninth after the needed win while Chicago also sits in ninth.

The league’s top ranked attack proved why they belong near the top of the league with an emphatic home win over the Vancouver Whitecaps.

Things didn’t start well for LAFC, but their misfortune wouldn’t last beyond the first five minutes. A misplay from defender Dejan Jakovic allowed a loose ball to come to Yordy Reyna, who easily slid a shot into an empty net.

LAFC would have the lead by halftime, however. An own goal off Andy Rose on a 35th minute corner got them on the board. Another corner in the 41st minute went in off the head of Adama Diomande for a the second goal.

The home team then ran rampant in the second half. Mark-Anthony Kaye scored less than two minutes after the kickoff with a well placed shot from distance. Carlos Vela then scored twice, once in the 54th and again in the 70th. The damage was capped off in the 72nd when Diego Rossi banked a shot in off the crossbar to make it 6-1.

Not that Vancouver ever stood a chance at a comeback anyway, but what little hope they had evaporated in the 85th when Freddy Montero was shown straight red for an aggressive challenge.

LAFC takes the three points and extends their league best total to 43 while the Whitecaps are stuck in tenth in the West with only 20.

An apparently tired San Jose Earthquakes side managed to squeak by Real Salt Lake 1-0 Saturday at Avaya Stadium on a stoppage-time goal by Danny Hoesen off of the bench.

After a sleeper of a match throughout most of the night, San Jose pulled ahead after Hoesen redirected a cross off of a corner by Paul Marie. The three points for San Jose keep them above the playoff line in sixth place in the Western Conference table.

San Jose has won six of their last 10 matches with two draws in between as they continue to climb their way back up from a nightmarish start to the season.