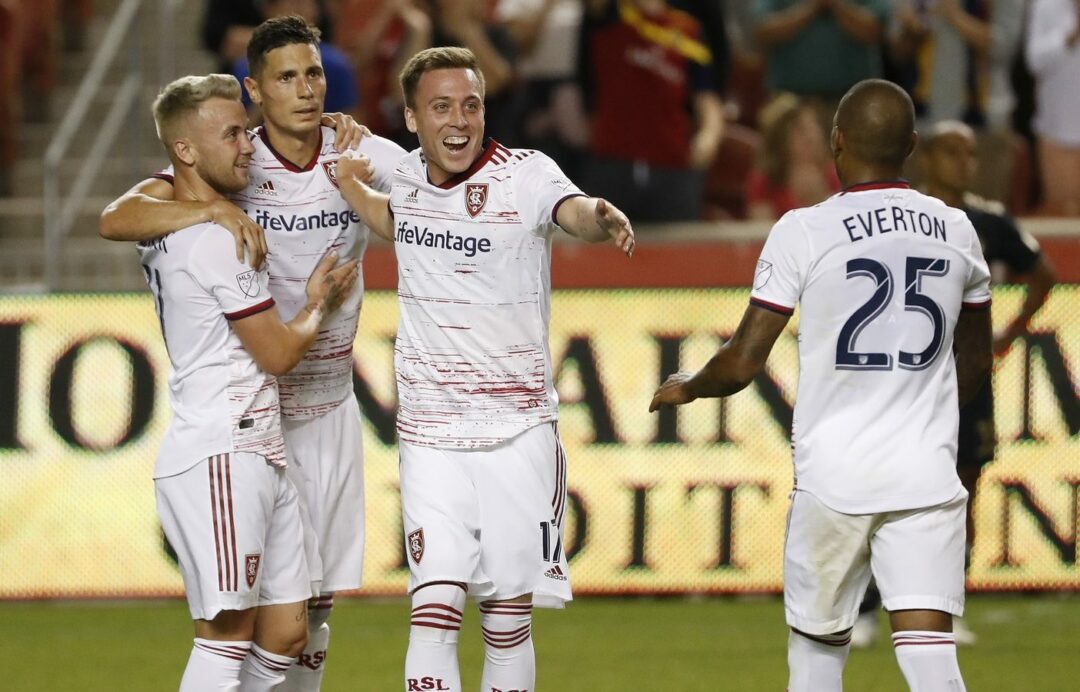 Seven matches took place in Major League Soccer on Saturday with the Eastern Conference leaders taking a hammering on the road.

Real Salt Lake used a brace from Jefferson Savarino to roll past the Philadelphia Union 4-0 at Rio Tinto Stadium. It was Union’s largest margin of defeat since a 5-1 loss to the Montreal Impact back in 2016. Savarino was not the only person getting on the scoresheet though for the hosts, Albert Rusnak and Damir Kreilach also netted goals.

Elsewhere, Minnesota United used a late game-winning goal from Mason Toye to help his side down FC Dallas 1-0 at home. Vito Mannone made a late penalty kick save to help preserve the win. Toronto FC downed rivals Montreal 2-0 at Stade Saputo, while FC Cincinnati defeated the Chicago Fire 2-1 away from home.

Toronto FC made it two league wins out of their past four with a 2-0 road win over rivals Montreal Impact on Saturday.

Alejandro Pozuelo broke the deadlock in the 61st-minute with long-range effort, after being set up nicely by Marky Delgado. It was Pozuelo’s eighth league goal of the season.

Anthony Jackson-Hamel and Maxi Urruti each had solid efforts to level the score, but Quentin Westberg made four saves in total to deny the hosts.

Jozy Altidore silenced the Impact faithful, scoring from a free-kick in the fifth minute of second-half stoppage time. Altidore now has six league goals in 10 appearances this season.

The Impact remain in fourth, while TFC are in seventh.

Orlando City picked up their third-consecutive positive result in a week after a 1-0 home success over the Columbus Crew.

After it looked like Caleb Porter’s Crew would leave Florida with a point, Orlando homegrown forward Benji Michel played the hero in the dying moments. Michel got on the end of Ruan’s pass and finished for his first MLS goal.

Both teams finished with a combined two shots on goal out of 15 in total, but the Lions got the last laugh. The only blemish for Orlando was Dom Dwyer’s sending off in the 93rd-minute, which will see him suspended for a midweek trip to Portland.

Orlando sit in eighth while Columbus remain horrid under Porter and in 11th.

FC Cincinnati made it back-to-back wins after a 2-1 road triumph over the Chicago Fire at SeatGeek Stadium.

Fanendo Adi scored a game-winning goal in the 83rd-minute to hand Yoann Damet another win as interim boss. Allan Cruz started things off in the first-minute with a close-range finish to hand the visitors an early lead.

Nico Gaitan had a chance to level the score in the 25th-minute from the penalty spot, but the Argentine’s shot struck the left post. However, Gaitan would level the match before halftime, scoring from a rebound after Spencer Richey saved his second PK attempt of the evening.

FC Cincinnati would claim the full three points in the 83rd-minute as Adi finished off a fast break with his first league goal for the club.

The Fire sit in 10th after the loss while FC Cincy are bottom of the East, but level with the Crew with 17 points.

Minnesota United made it four-consecutive league wins after a dramatic 1-0 home success over FC Dallas.

The match came full throttle in the final 10 minutes as the Loons snatched the lead and held onto it for good. Mason Toye’s left-footed shot beat Jesse Gonzalez for his fourth league goal in his fifth appearance of the season.

Vito Mannone fouled Michael Barrios in the 94th-minute which gave the visitors a last chance to snatch a point. However, Mannone preserved the win with a diving save on Reto Ziegler’s 98th-minute attempt.

The Loons are now in third place on 33 points, while FC Dallas are seventh and four points behind.

Real Salt Lake picked up their third clean sheet victory out of the past four league matches with a 4-0 thumping of the Philadelphia Union.

A defensive miscue from the Union gave RSL their opening goal as Savarino beat Andre Blake with a low shot in the 23rd-minute. Blake dove, but the ball snuck underneath him and in to put Mike Petke’s side in front.

As the Union tried to get back into the match, RSL put the final daggers into a convincing performance. Savarino’s long-range blast doubled his tally and his team’s lead in the 71st-minute before Albert Rusnak beat Blake to the top corner ten minutes later.

Damir Kreilach got on the end of Everton Luiz’s pass a minute before stoppage time to cap the final score at 4-0.

Andrew Wooten made his Union debut and scored with a nice finish, but video review wiped away the goal.

Sporting KC made it back-to-back clean sheet wins with a 3-0 triumph over the Vancouver Whitecaps on the road.

The visitors got some help in the 24th-minute as Ali Adnan’s own goal put Peter Vermes’ side in front. Gerso Fernandes’ attempt missed but Adnan unfortunately saw the shot bounce off of him and into his goal.

SKC iced the win in the 56th-minute as Felipe Gutierrez’s long-range shot beat Zac MacMath to the bottom-right corner. It was the midfielder’s eighth league goal of the season, one more than his 2018 total.

After missing on his earlier effort, Gerso added a late finish to pad the scoreline. SKC are in ninth while Vancouver sit bottom.

The Colorado Rapids hit back twice on the road to steal a point in a 2-2 draw against the Portland Timbers.

Sam Nicholson’s 76th-minute goal ended the entertaining affair at Providence Park. The Scotsman roofed a shot from outside of the box past Steve Clark to give Conor Casey’s side a bounce-back result after a July 4th loss to New England.

Tommy Smyth’s own goal after 27 minutes put Portland in front, but only for a short time as Jonathan Lewis equalized for the Rapids on the restart. Lewis now has three goals in five appearances for Colorado.

Lalas Abubakar’s hand ball after the hour mark allowed Diego Valeri to score from the penalty spot. Nicholson would have the final say though, coming off the bench and tying the match nine minutes later. It was Nicholson’s first goal since Aug. 2018.

Portland sits in 10th, four points clear of the Rapids out West.