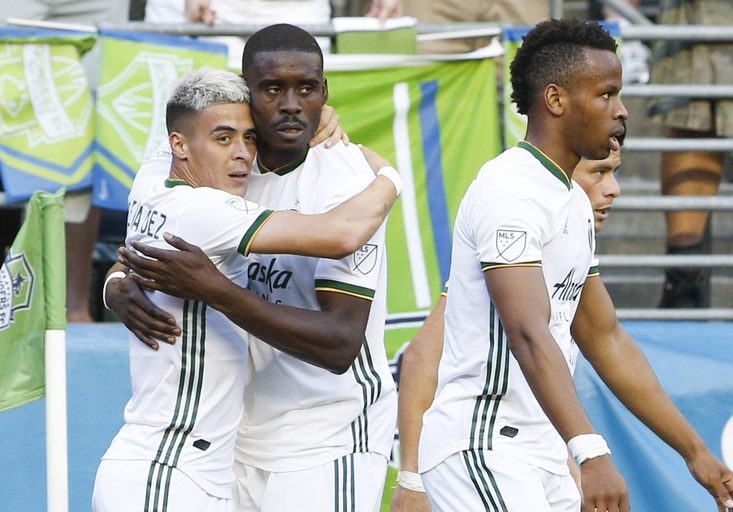 A pair of Eastern Conference contenders squared off down south as Atlanta United welcomed the Wayne Rooney-less D.C. United to town. Late goals from Gonzalo and Josef Martinez helped the Five Stripes to a 2-0 home win over the Black and Red.

Atlanta United had to wait for a breakthrough against D.C. United but eventually found a pair of late goals for a 2-0 home win.

Gonzalo “Pity” Martinez came off the bench to score the game-winning goal in the 89th minute, while Josef Martinez iced the result with his 16th league goal in the 92nd minute.

Darlington Nagbe’s cross was headed in by the Argentine in the 89th minute to hand the Five Stripes a 1-0 advantage. It gave Frank de Boer relief after Josef Martinez skied a penalty kick in the 72nd minute and Bill Hamid denied Miles Robinson and Martinez earlier in the half.

The Venezuelan Martinez would redeem himself though as he finished a fast break in stoppage time. Pity Martinez sent a through ball for Josef to chase and he made no mistake to ice the home win.

Brad Guzan made three saves to help the Five Stripes keep the clean sheet. No save was bigger than Guzan’s on Paul Arriola before halftime after the U.S. Men’s National Team winger caught Leandro Gonzalez Pirez sleeping and raced down the middle of the field.

The defending MLS Champs move into second place, a point ahead of D.C. United.

Bruce Arena’s rejuvenated New England Revolution extended its unbeaten streak to 10 games in Cincinnati, getting even for their early-season defeat back in March.

Carles Gil got the Revs on the board early, finishing off a chance created by Gustavo Bou from close range in the ninth minute.

Gil would get involved again in the second half, this time assisting Antonio Minar Delamea in the 58th minute to double the lead.

Cincy had a couple of shouts for penalties that did not get reviewed, and ultimately didn’t show much else to get excited about from live play.

New England moves into seventh in the Eastern Conference, while Cincinnati remains in the cellar.

The New York Red Bulls bounced back from their mid-week road loss in Toronto by beating Orlando City SC 1-0 in a testy affair. The win is a relief for the Red Bulls, who now close a stretch of three games in eight days. The result is a disappointment for Orlando who had numerous chances to take control of the match.

The Red Bulls opened the scoring in the first half when Kaku slipped an impressive ball to Brian White who was able to finish off the chance. The goal continued White’s strong run of form in his first full MLS season, marking his seventh goal of the season in 14 appearances.

Orlando would not go down easy in the second half, however. The second 45 minutes of the match were intense, with Orlando hitting woodwork three times. Strong performances from Ruan, Nani and Tesho Akindele were not enough, however, to capture points at home.

The win puts the Red Bulls in fourth place in the Eastern Conference with games in hand on two of the three teams above them. The loss keeps Orlando City SC in ninth place in the East as the team continues to build momentum this season.

Brian Fernandez introduced himself to the storied rivalry between the Portland Timbers and the Seattle Sounders with a brace that helped his team earn a 2-1 road win over the Sounders.

Fernandez opened the scoring in the 20th minute, stepping into a rebound off the crossbar and volleying past Stefan Frei for the 1-0 lead. Jorge Moreira initially blew past left back Brad Smith, creating space to fire a shot that slapped off the frame.

It had to be him.

Raul Ruidiaz almost equalized moments later, but stabbed a ball into the stands after sliding to latch onto a Jordan Morris cross to the goalmouth.

Gustav Svensson headed a Nicolas Lodeiro free kick toward goal in the 40th minute, but goalkeeper Steve Clark tipped the shot over the crosssbar.

Ruidiaz equalized just five minutes into the second half, tracking down a long ball over the top, rounding the goalkeeper at the top of the 18-yard box and easily finishing into an empty net to tie the score 1-1.

The match was not tied for long, though. Less than a minute later Fernandez struck for a second time, running onto a pass from Sebastian Blanco that split Seattle’s defenders and slotting past Frei for his second goal of the night and the 2-1 lead.

The Sounders had numerous opportunities to equalize down a choppy and chippy home stretch, but could never find the back of the net. Roman Torres had perhaps the clearest chance, powering a clean header directly to Clark deep into 11 minutes of stoppage time.

Diego Chara picked up a yellow card in the 99th minute that will force him to miss the club’s match against the LA Galaxy next weekend.