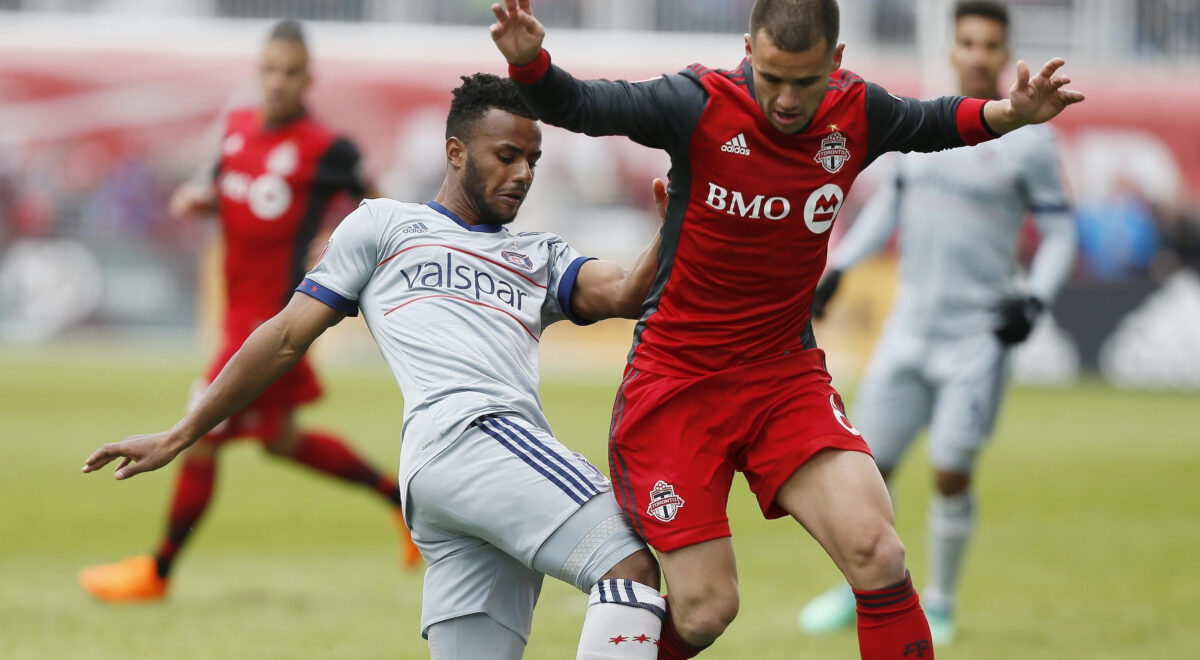 Mo Adams is on his way to Atlanta United.

The club announced on Wednesday that Adams was acquired in a trade with the Chicago Fire. In exchange for the former 2018 MLS SuperDraft first-round selection, Chicago received $100,000 in General Allocation Money. Atlanta retrospectively placed Gordon Wild on waivers to make room for Adams.

“Mo is a talented young player with the ability to play multiple positions for us,” Vice President and Technical Director Carlos Bocanegra said. “We like his versatility and his competitiveness will serve us well moving into the second half of the season.”

Since being drafted last year, Adams has totaled 25 league appearances including 10 in 2019. He recorded his first MLS assist in a 4-1 win over the Colorado Rapids back in April.

Adams currently has his U.S. Green Card so he will not occupy an international roster spot on the Five Stripes roster.

According to Pro Soccer USA, Bou will likely appear against the Vancouver Whitecaps at Gillette Stadium. The 29-year-old Argentine joined from Liga MX side Club Tijuana last week on a club-record deal.

“When Bruce [Arena] originally spoke with me, he talked about the specific project he’s trying to build here,” Bou said through a Spanish translator. “He’s trying to put together a very competitive team, even now in the middle of the season. He told me he really wanted me to be a part of this project. I feel excited coming here and it’s a new challenge.

Bou scored 20 goals in 47 appearances for Xolos, while also appearing for Racing Club on-loan in 2018. He will aim to make an impact against Vancouver, the bottom-placed team in the Western Conference.

“We have to get on the field and win this game on Wednesday,” Revs head coach Bruce Arena said. “We’re simply going to go out and do what we’ve been doing, and hopefully a little bit better and a little bit more consistent over 90 minutes.”

Major League Soccer and Adidas have partnered with the German Football Association (DFB) to train MLS academy goalkeepers and coaches.

The deal will feature year-long development courses and run from July 20-26. Participating coaches and 27 players will take part in both classroom education and field instruction in Germany. Following the conclusion of the camp, the curriculum will be brought back to North America to continue implementation through 2020.

“Major League Soccer continues to be at the forefront of player development, and this innovative partnership with DFB ensures an important learning opportunity for both academy coaches and players,” MLS VP and technical director Fred Lipka said in a statement.

“With both coaches and players engaging in this challenging environment, we expect this to have a tremendous impact on the future of goalkeepers in our country and we cannot wait to see the bright future in store for the participants.”

The DFB’s goalkeeper performance course will be broken down to three phases including training in this month’s week-long course in Munich, development and implementation of the German framework into the daily routines at MLS academies, dialogue between DFB mentors and their MLS counterparts, and an “immersion” which will see German mentors travel to North America at the end of the 12-month implementation period for final assessment and testing.

Upon passing the rigorous course, MLS goalkeeper academy coaches will receive an officially recognized coaching certificate from the DFB.

Cole Turner has been signed to a pre-contract with the Philadelphia Union.

The club announced the move on Wednesday, which also saw Turner saw a professional contract with the Union’s USL affiliate, Bethlehem Steel. Turner, 18, will officially become a homegrown player with the Union in 2020, becoming the 11th in the club’s history.

“We are very happy to have completed the signing of Cole Turner,” Union Sporting Director Ernst Tanner said. “He has a strong knowledge of the game and a sharp awareness — the type of player who always seems to be in the right position in central midfield. He is an exciting young prospect and we are looking forward to helping him grow as a professional.”

Turner spent three years in the Philadelphia Union Academy’s Residency Program and played with the Academy’s U-13/14, U-16/17 and U-18/19 squads. He made 65 appearances during his time, scoring eight goals combined.

Turner is no stranger to the Steel as he’s made 11 appearances and registered one assist for them this season. He’s also received a call-up to the U.S. U-14 Boys’ National Team in the past.