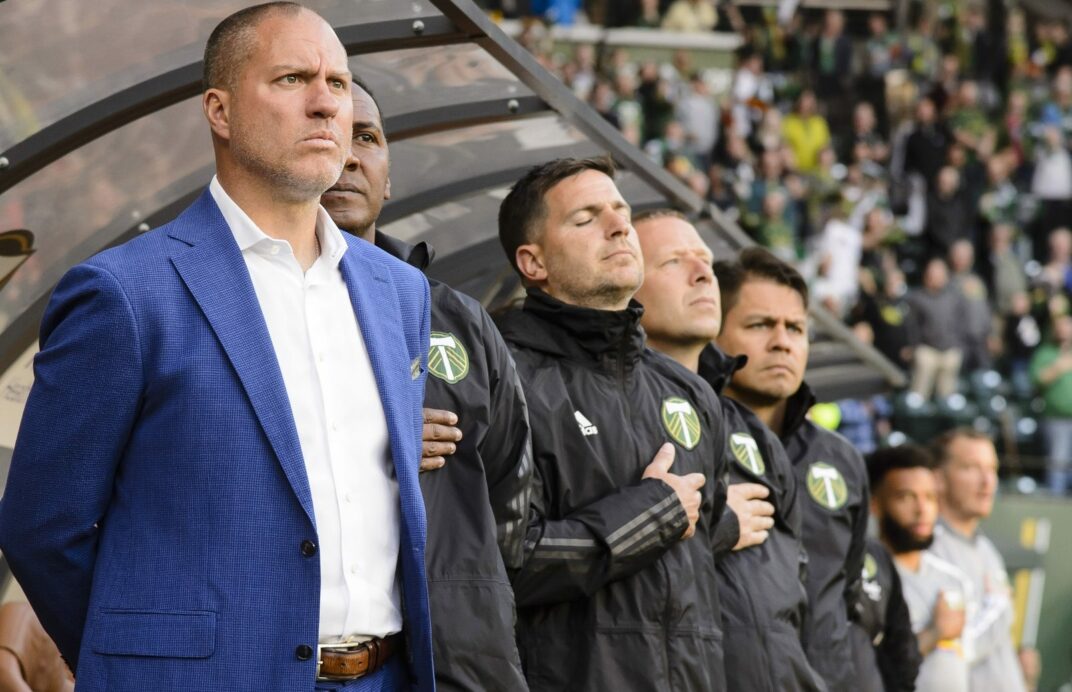 After leading the Portland Timbers to the 2018 MLS Cup, head coach Giovani Savarese and his coaching staff have been signed to new multiyear contract extensions.

The club announced the news on Tuesday that Savarese, Carlos Llamosa, Miles Joseph, Guillermo “Memo” Valencia, and Shannon Murray all have signed to new extensions. Savarese and his staff helped the Timbers match its best regular-season win total during his first season in Portland.

Savarese became one of three head coaches since 2000 to register 18 or more wins, including playoffs, in his first year as head coach in MLS. His coaching staff all joined in 2018.

“When Gio took the Timbers job last year he was on a short initial contract,” Timbers owner Merritt Paulson said. “This extension is a well-deserved reward for Gio’s faith in his own coaching ability and, more so, an acknowledgement of the fact Gavin Wilkinson and I are delighted with Gio and his entire staff, both on and off the field. We expect Gio to be our on-field leader for years to come.”

“The current Timbers club culture has never been better and Gio is a top-quality coach and an even better person. We are lucky to have Gio and his staff here in Portland.”

The Timbers are currently 8-3-1 over their last 12 games in all competitions, including back-to-back wins in the U.S. Open Cup over the Seattle Sounders and L.A. Galaxy respectively.

Augsburg announced on Tuesday they’ve acquired Gruezo from Dallas for €4 million ($4.5 million), making him their sixth signing of the summer. Dallas also retains a 20% sell-on value and could receive up to $6.2 million pending incentives.

Gruezo, 25, is coming off international duty with Ecuador at the 2019 Copa America.

“I’m delighted that FC Augsburg have given me the opportunity to return to Germany and play in the Bundesliga for the second time,” Gruezo said in an interview with the club. “I have gathered a lot of important experience in Dallas and I now want to show that in Augsburg.”

Gruezo has signed a five-year contract with the club and made 98 appearances with FC Dallas from 2016-19. He’s also made 18 appearances with VfB Stuttgart from 2014-16, as well as time with Independiente DV and Barcelona SC.

The midfielder has won 26 caps for Ecuador.

The Philadelphia Union added a veteran defender to their squad on Tuesday.

The club announced they’ve signed former NYCFC and Orlando City right back RJ Allen for the remainder of the 2019 MLS season. Allen has been added immediately to the active roster and will be available for Wednesday night’s showdown at Orlando City.

“RJ will provide needed depth and cover for our fullback corps,” Union sporting director Ernst Tanner said. “He has four years of MLS experience and has shown well as a trialist over the past week. We’d like to welcome him to our team.”

Allen has made 71 regular season MLS appearances between 2015-18. Last season with Orlando City, Allen made 18 appearances with the Lions before being released in December.

His arrival comes a week after Olivier Mbaizo was ruled out for 4-8 weeks due to a partial meniscus tear.

The 30-year-old joins FC Cincy after spending the last seven seasons in the Eredivisie. He will be added to the team’s roster on July 9th when the Secondary Transfer Window opens and will occupy an international roster spot.

“We are pleased to be able to add a quality player and we’d like to welcome Maikel to FC Cincinnati,” FCC GM Gerard Nijkamp said. “He brings a high level of experience and leadership to our backline and will be an excellent addition as we solidify our style of play. We look forward to integrating Maikel with our current group and eagerly anticipate his future as an FC Cincinnati player.”

Van der Werff has made a combined 247 first-team appearances during his 11 professional seasons so far. He’s scored 23 goals and registered 19 assists across all competitions with Vitesse Arnhem, PEC Zwolle, and Dutch second-tier side FC Volendam.

Caleb Porter added another attacking weapon to his roster on Tuesday.

The Columbus Crew announced the acquisition of Costa Rican winger Luis Diaz. Diaz, 20, joins from Costa Rican side Herediano and will occupy an international roster spot.

“Luis is a young, dynamic player who is already making a name for himself despite his young age and we are excited to welcome him to Crew SC,” Crew SC President Tim Bezbatchenko said. “As one of the most promising talents in Costa Rica, we know he will continue to develop at our Club and we believe his skillset will allow him to be successful in MLS. The addition of Luis strengthens our team as we continue to build our roster.”

He was recently named the Best Under-21 Player in the Torneo Clausura 2019 by UNAFUT, Costa Rica’s union of First Division soccer clubs. He also won the Torneo Clausura in 2018 with Herediano. Diaz did feature in both legs against Atlanta United in the 2019 Concacaf Champions League.

In Costa Rica’s top-flight, Diaz has made 66 appearances in which he’s scored three goals and added eight assists. He was named to Los Ticos 40-man provisional roster for the 2019 Concacaf Gold Cup.