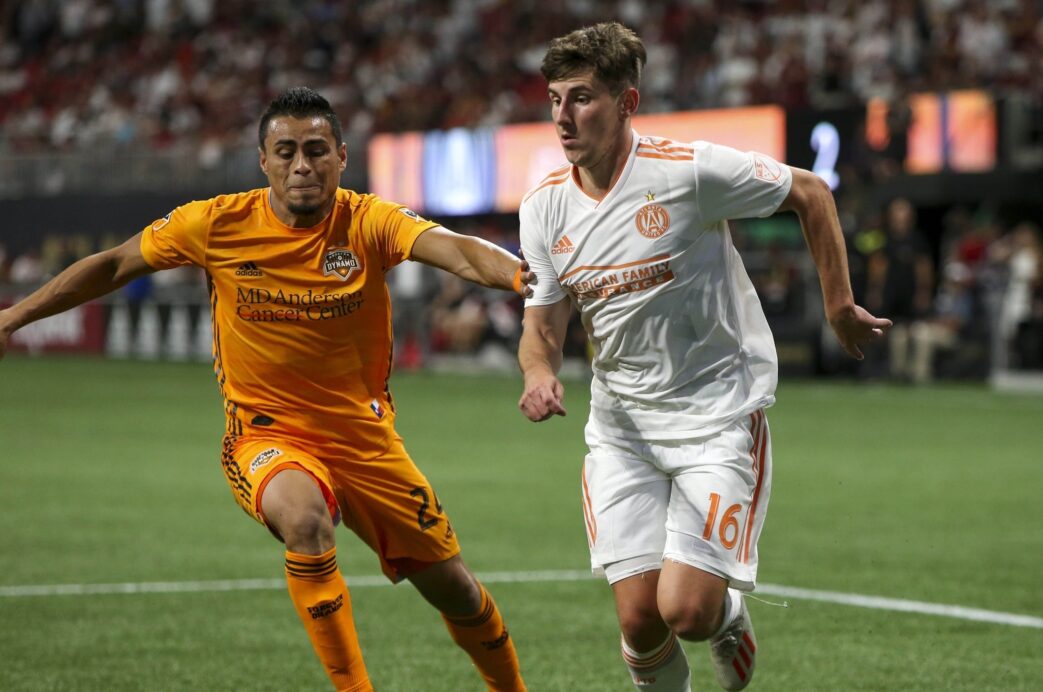 A brace from Josef Martinez and strong play from Julian Gressel helped Atlanta United to a 5-0 rout of the Houston Dynamo. Atlanta youngster Brandon Vazquez and MLS veteran Darlington Nagbe also got on the score sheet as Atlanta jumped to second place in the Eastern Conference.

Meanwhile, the New England Revolution completed a rout of their own, beating a struggling Vancouver Whitecaps side 4-0 at home. A late equalizer from Romario Williams gave the Columbus Crew a 2-2 draw away from home and in a game of gaffs Toronto FC beat the New York Red Bulls 3-1 at BMO Field.

Atlanta United returned to winning ways as they trounced a 10-man Houston Dynamo 5-0 on Wednesday night.

Atlanta were sure to capitalize on the advantage, scoring five times in the match. Darlington Nagbe opened the scoring, and his Atlanta United account, in the 27th-minute, clinically finishing a low cross from Julian Gressel. A goal from Brandon Vasquez and a brace from Josef Martinez put the game out of reach for the Dynamo, and a late goal from Gressel capped off an impressive attacking display.

The match was full of chances that could have made the score even more lop-sided, including a couple of excellent saves from Houston goalkeeper Tyler Deric to keep Houston in the game. Strong ‘keeping’ would not be enough however, giving Houston their sixth loss in seven games.

The win jumps Atlanta United to second in the Eastern Conference while the Houston Dynamo now sit two points under the playoff line.

The New England Revolution handed the Vancouver Whitecaps their fourth consecutive loss in imposing fashion on Wednesday night, beating the Canadian side 4-0 in Foxborough. The win reinforced the Revolution’s playoff ambitions, and in doing so tallied their ninth-straight game unbeaten.

The Revolution opened scoring at the brink of halftime when New England newcomer Gustavo Bou scored an acrobatic volley to put the home side up 1-0. A corner kick hit by Carles Gil found the flying foot of Bou who was able to rocket the ball past an outstretched Maxime Crépeau to give New England the lead.

New England would find more chances in the match, but a massive eight saves from Crépeau kept the score line close for most of the game. His impressive display would not be enough to keep New England at bay however as goals from Diego Fagundez, Carlos Gil, and Teal Bunbury would seal victory for the Revolution in the final 10 minutes of the match.

In a match where the Revolution outshot Vancouver 33 shots to 6, the score line reflects New England’s dominance in the match.

New England’s win puts them two points below the playoff line with 27 points after Toronto’s Wednesday night victory. The Vancouver Whitecaps’ loss means that they remain last in the Western Conference with 20 points.

The Chicago Fire nearly collected an important three points at home on Wednesday night against the Columbus Crew, but a late equalizer from Columbus forward Romario Williams split the points in Chicago.

U.S. Youth National Team starlet Djordje Mihailovic opened the scoring in the 28th-minute, settling a cross from midfielder Przemyslaw Frankowski with his chest and striking a low-driven volley past a diving Kenneth Kronholm.

Columbus answered early in the second half as a point-blank tap-in from Gyazi Zardes would level the match in the 47th-minute.

In the 63rd-minute the Fire responded through C.J. Sapong, who latched onto a loose ball in the box and found the back of the net, restoring the Fire’s lead.

A late goal from Romario Williams spoiled the Chicago Fire’s victory celebration however, scoring in the 90th-minute to force the two sides to a draw. While the Chicago Fire dominated much of the match on Wednesday night, out-shooting the Columbus Crew 19 to 10, their defense lapsed at times leaving them with a single point at home.

The Chicago Fire sit in 10th place in the Eastern Conference with 23 points while the Columbus Crew remain directly below them in 11th with 18 points.

The impressive duo of Jozy Altidore and Alejandro Pozuelo was on display again on Wednesday night as Toronto FC beat the New York Red Bulls 3-1.

Jozy Altidore opened the match in the sixth minute with a stunning back-heel goal under pressure to put the home side up 1-0. Marked by Red Bulls defender Tim Parker in the box, Jozy took a cross from midfielder Tsubasa Endoh out of the air and immediately put past a diving Luis Robles to open the match.

Toronto FC doubled their lead in the 26th-minute as a poor tackle committed by Red Bulls defender Kemar Lawrence lead to a penalty kick for Toronto. Pozuelo froze Robles on his run-up and cooly scored to bring Toronto’s lead to two.

A goal from Red Bulls USL product Tom Barlow in the 63rd-minute raised hopes, but a response from Toronto FC through Ashtone Morgan less than 10 minutes later would put the game to bed.