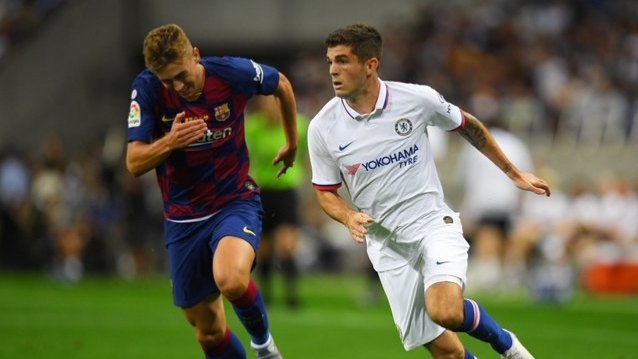 Christian Pulisic’s first start for Chelsea ended on a high note against one of Europe’s top teams.

The U.S. Men’s National Team star helped the Blues to a 2-1 win over Barcelona in Japan on Tuesday. Pulisic did not register a point, but easily could’ve finished with an assist. He also left Gerard Pique in the dust on a great solo effort up the field, exciting Chelsea fans for this upcoming season.

Pulisic’s early effort was saved by Marc Andre ter Stegen while Tammy Abraham sent the rebound over the goal. Abraham would make amends later in the match with a goal, while Ross Barkley also scored.

Ivan Rakitic pulled a goal back in stoppage time for Barcelona, but the Catalan side could not avoid defeat.

Pulisic played 60 minutes in the friendly win and wore No. 24 on his jersey. It is unlikely that he will wear former Blues’ star Eden Hazard’s No. 10 as Willian is the likely candidate to do so.

Pulisic shows off his blistering pace as he races away down the left flank, he tries his luck on goal from a tight angle, but it smashes the side netting.

Although Lionel Messi and Luis Suarez did not feature, Antoine Griezmann did make his first appear for his new club.

As for Pulisic if he continues to put in performances like Tuesday’s he should have zero issue starting in Frank Lampard’s opening day lineup.