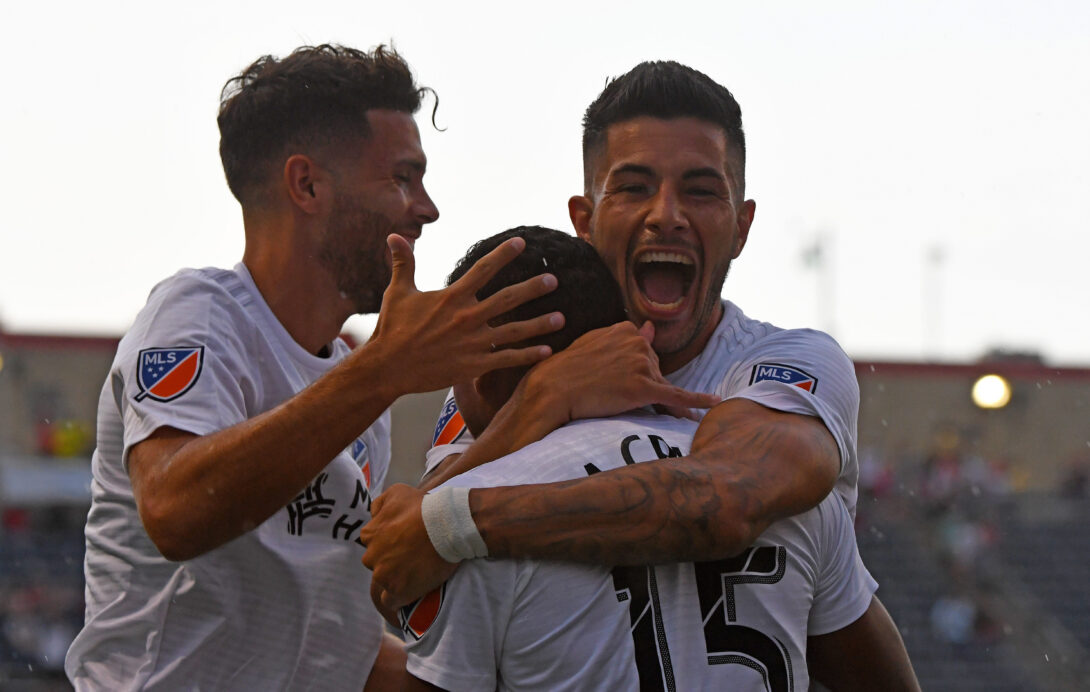 Saturday night’s 2-1 win over the Chicago Fire at SeatGeek Stadium proved that FC Cincinnati hasn’t completely busted at the seams after seeing two stretches of winless streaks in their debut MLS season.

It wasn’t the prettiest and it took some woeful luck for Chicago, but Cincy got itself on the board. Allan Cruz’s goal within the first minute and Fanendo Adi’s in the 83rd after a fair amount of grinding it out have the club scoring by committee with its last five goals coming from the feet of as many players.

“We focus on ourselves. We knew we were going to go through a tough time the past month. Getting a second result in a row is big for them. I’m very happy this group is working so hard every day to get better but also to get results. They earned it and they deserved it.”

The club is now 3-6-0 under 29-year-old Damet, and owners of two-consecutive wins for the first time since March. The wins follow a run of six-consecutive league losses and disappointing departure from the U.S. Open Cup.

For Cruz, the spectacular play showed some of the quality the team was missing while it suffered through depth issues during his absence for the Gold Cup.

“Of course, happy to be back with the team. The most important thing is that from the two games that we have played, we have won. We feel comfortable. We are taking it step by step.” He said through a translator.

While the team is buzzing, Cruz will enjoy the moment but he isn’t going to be a prisoner to it.

“We have to continue working hard during the week. Now, we have to think about the game that is coming. Today has already passed and we are happy with the result.”

Adi has oft been polarizing during his tenure with the club. This season hasn’t been what he, the team, or fans were hoping for through 19 weeks. In last week’s win, fans went as far as booing him when he entered the game in substitution.

The clinching tally is his first MLS goal in Cincy garb, and the first step towards being the player all parties expected him to be.

“It’s been a tough year for everybody. Not just for me, but obviously for me it’s been one hell of a year. I wanted to do well for the club, I came in as a very huge investment for the club. It didn’t turn out to be what we expected, but the club has been very patient with me.” Adi said.

Being sidelined and out of starting XI combinations due to injury and fitness levels has been his most recent obstacle, but he’s remained active and connected behind the scenes.

“I told the guys you’ve got to play dirty sometimes to get three points on the road. Rashawn [Dally] did a great job. All the players did a wonderful job today. We stuck in there and we defended. I think we just need to keep the momentum going.”

With the win, the club finds itself tied for the cellar in the Eastern Conference which might not sound like anything to celebrate until you consider how isolated the team was a before the six-point pickup. Having 17 points to its name rather than 11, Cincy is now even with natural rival, the Columbus Crew.

“Momentum is insane in this league,” Goalkeeper Spencer Richey said.

“You look at New England and Colorado, they obviously have the coaching change, but they don’t sign any new players. It’s just a switch, it’s something that clicks in the locker room with guys’ mentalities and you can turn your season around.”

I think they were two of the worst teams in the league and then they go five unbeaten. We’re trying to get on that roll as well and we’ll certainly take a lot of confidence from this game. It’s not easy winning on the road in this league. We’ll try to do it again this Thursday against D.C.”

FC Cincinnati is speculated to be courting Dutchman Ron Jans for the coaching switch.

Cincy has confirmed there’s one candidate for the vacancy, Jans confirmed he’s been talked to about it. It seems as though the move is imminent, and if having Yoann Damet step down on a high note is a factor the club couldn’t be guaranteed a better time to get a new coach bump with Wayne Rooney and D.C. United coming to town on Thursday.