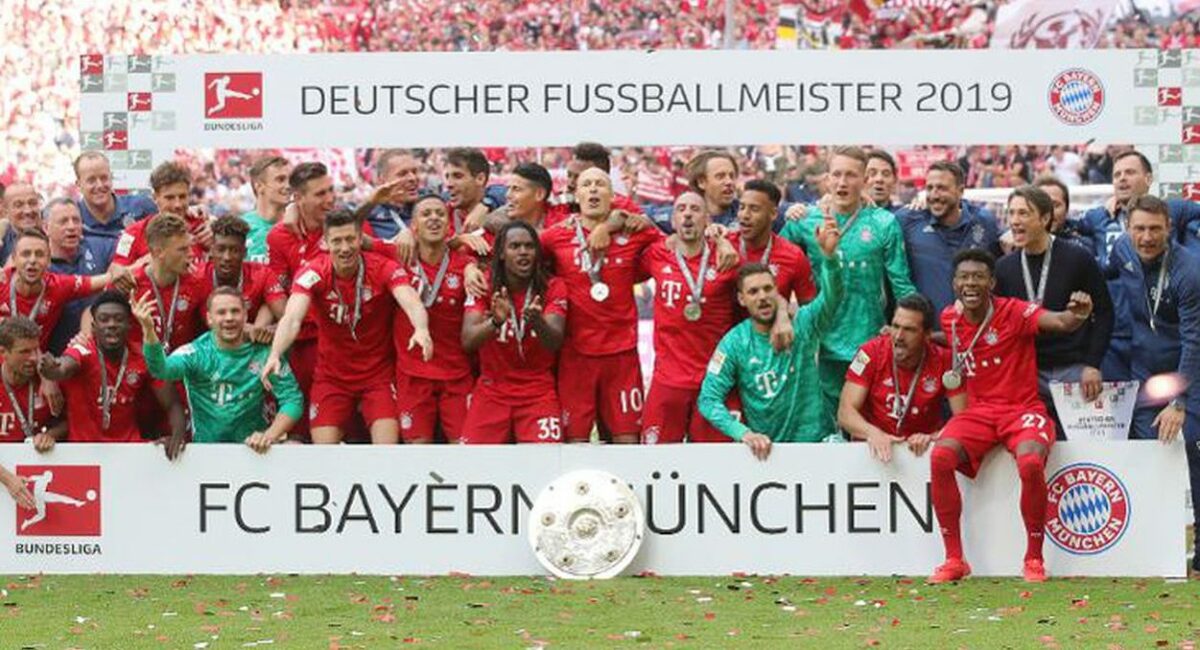 Another season, another Bundesliga title for Bayern Munich.

That has been the story for the last seven seasons in the German Bundesliga, but Borussia Dortmund and RB Leipzig will be favored to give the Bavarian giants a run for their money in 2019-20.

Niko Kovac has plenty of talent remaining in his squad despite Arjen Robben and Franck Ribery’s departure. Robert Lewandowski, Serge Gnabry, and Kingsley Coman will all headline the attack as Bayern seeks an eighth-consecutive top-flight crown.

Borussia Dortmund and RB Leipzig will be expected to be up near the top of the table with several stars of their own to choose from. Marco Reus and Thorgan Hazard are the marquee talents for Dortmund, while Timo Werner and Yussuf Poulsen lead the line for Julian Nagelsmann’s side.

FC Koln, Paderborn, and Union Berlin won promotion to the Bundesliga and will try to avoid any quick stays. All three will have to fight for every point if they want to stay in the top-flight heading into next summer.

Here is SBI’s full 2019/20 season preview for the German Bundesliga:

Player to Watch: Carlos Gruezo made the switch to Augsburg from FC Dallas and should add a versatile piece to the team’s midfield. Gruezo can cover plenty of ground and is physical enough to deal with some of the Bundesliga’s top creative midfielders.

Outlook: Augsburg finished four points clear of the bottom three last season and have plenty of attacking talent returning. They should have enough to improve up to 10th-12th this season.

Player to Watch: Kai Havertz broke out last season with 20 goals in all competitions for Bayer Leverkusen. Now with a strong season under his belt, the 20-year-old German will try to help his team compete for a trophy.

Outlook: Leverkusen finished fourth last season, ending the season on a six-match unbeaten run. They will have European action in midweek so depth will be key if they want to jump into the top three.

Player to Watch: Serge Gnabry had a solid 13-goal, six-assist haul last season and will try to follow that up this year. The German may be asked to do more if Bayern want to run away with the Bundesliga title rather than deal with Borussia Dortmund until the final weekend.

Outlook: Expect Bayern to be tested by the likes of Dortmund and RB Leipzig but with their talent they should be able to claim another league and cup crown. With Arjen Robben and Franck Ribery gone, expect some younger players to be forced to step up.

Player to Watch: Jadon Sancho is one if the top players in Germany right now and the 19-year-old will be closely watched by other teams in the division. His production was impressive last season, but lets see if he can follow up in 2019-20.

Outlook: Dortmund will push Bayern all the way this season, but may fall just short due to Bayern’s experience of winning. Expect them to finish second once again.

Player to Watch: With Luka Jovic and Sebastian Haller gone, Ante Rebic has become even more important for Eintracht Frankfurt. His 10 goals last season proves he can still score, but he may be asked to up that number with two key players gone in attack.

Outlook: Frankfurt will dip in goals scored which could see them miss out on a top-seven finish. They will remain in the top ten however.

Player to Watch: Zack Steffen’s arrival gives Dusseldorf a talented young goalkeeper who can start immediately. Due to Michael Rensing’s preseason injury, expect Steffen to get the starting job.

Outlook: Dusseldorf finished 10th last season but with plenty of teams rebuilding behind them in the table, they may drop a few spots this season. Defensively they have to tighten it up after a -16 goal differential.

Player to Watch: 25-year-old defender Dominique Heintz made 36 appearances last season for Freiburg and will be important if the team wants to avoid conceding plenty of goals. He is young and experienced.

Outlook: Freiburg fought off relegation but could find it tough if they don’t find more goalscorers. Nils Petersen and Luca Waldschmidt are experienced but younger players have to be ready to go.

Player to Watch: Marko Grujic returns from Liverpool which provides Berlin with an experienced and young option. With Salomon Kalou now 33 years old, Grujic may be groomed for the future.

Outlook: Hertha Berlin can get into the top ten but need to be better at the Olympiastadion. They earned more points on the road last season compared to at home which needs to change.

Player to Watch: 27-year-old Algerian striker Ishak Belfodil had 17 goals in all competitions last season and will be expected to follow it up this year. Paired with Andrej Kramaric, these two could be one of the Bundesliga’s underrated attacking duos.

Outlook: With Julian Nagelsmann out, Hoffenheim may struggle slightly this season. Top 10 is a good goal but if the attack continues to provide goals, they can inch into the top seven.

Player to Watch: Simon Terodde led Koln with 29 goals last season, but needs to carry that confidence over to the top flight. If he can scored 10-15 goals then Koln may have a good chance of finishing away from the bottom three.

Outlook: Newly promoted sides have to score goals and Koln has three good options in attack. Defensively they need to avoid blowouts to the top sides in order to remain confident about staying up. Koln should have enough to do it.

Player to Watch: 22-year-old Jean-Philippe Mateta broke onto the scene with 14 goals last season for Mainz and will be counted on to do more of the same this season. The Frenchman is still young, but has already proven he can find the back of the net in the first division.

Outlook: Mainz finished comfortably away from the bottom three and will need to replicate their home form to do that again. An 8-5-4 home record played big dividends for the club and if they do that again they can finish in the top 12.

Player to Watch: Yann Sommer is a veteran keeper who is one of the tops in the Bundesliga. The 30-year-old Swiss international came up with big saves for the club last season and can carry his side to a victory if need be.

Outlook: Top seven is a realistic goal for Gladbach who will try to start life positively without Thorgan Hazard in attack. Raffael and Alassane Plea headline the attack, while Matthias Ginter is experienced in the heart of defense. They will need to play well against the big boys though if they want to improve on last season’s finish.

Player to Watch: 29-year-old Sven Michel bagged 16 points last season for Paderborn to help the club earn promotion. A veteran in Germany, Michel stepped up to the plate with 25 more appearances from the prior year. His playmaking ability will be huge if Paderborn want to avoid a quick drop.

Outlook: It will be tough for Paderborn to avoid a relegation fight, but they luckily have players who can score. The lack of a double-digit goalscoring striker doesn’t help their cause, so midfielders will need to play a major role in that area.

Player to Watch: RB Leipzig now has one of the top young managers in European football with Julian Nagelsmann taking over for Ralf Rangnick. Timo Werner is important for the club, but Yussuf Poulsen’s strong campaign last season was just as important going forward. The Danish international bagged 18 goals last season and could eclipse 20 if he continues to grow.

Outlook: Leipzig will compete for the league title, but they need to avoid slip-ups to teams behind them in the table. Losses to Freiburg, Werder Bremen, and Wolfsburg were examples of that which cost them a chance at second place and beyond.

Player to Watch: 24-year-old Benito Raman comes in from Dusseldorf to hopefully give Schalke a double-digit goalscoring option. After bagging 11 goals in all comps last season, the Belgian comes to Gelsenkirchen fighting for starts up top.

Outlook: Schalke’s defense was horrid last season and they need to be more competitive in the backline to avoid a relegation battle. They finished last in the Bundesliga with a 4-3-10 home record last season and need to help themselves out with better performances at home. Schalke should be fighting for a top 10 finish.

Player to Watch: Swedish forward Sebastian Andersson led the team with 13 goals in all competitions last season and has to carry that over in 2019-20. Union Berlin does not have plenty of top-flight experience on the roster so Andersson may be forced to carry the load offensively.

Outlook: Looking at the roster, Union Berlin doesn’t have enough to remain the Bundesliga. However, that could change if they are solid defensively and good enough to score consistently. Expect them to finish near the bottom, but a bad first-half could spell turmoil in the winter time.

Player to Watch: Josh Sargent may not have appeared as much as he would’ve liked last season for Bremen’s first team, but after a strong preseason looks ready to help this campaign. Sargent brings youth and something new to the Bremen attack which could help after Max Kruse’s departure this summer.

Outlook: Bremen has what it takes to finish in the top-seven and should be able to. A variety of different attacking weapons could help Florian Kohfeldt come up with new ideas to get after the big boys in Germany.

Player to Watch: Wout Weghorst scored 18 goals in all comps for Wolfsburg and is one of the top strikers in Germany. The Dutch forward will look to carry the load once again for Wolfsburg who will seek a move up the standings come seasons end.

Outlook: With Weghorst in attack, Maxi Arnold and Admir Mehmedi in midfield, and John Brooks and Robin Knoche in defense, Wolfsburg have talented everywhere on the pitch. To make improvement though they need to play better against the likes of Bayern, Dortmund, and RB Leipzig, all whom they lost to in the spring.

Who is your favorite to win the Bundesliga this season? Which player are you most excited to watch? Which teams will be relegated to the second tier? Who will be the biggest threat to Bayern Munich?