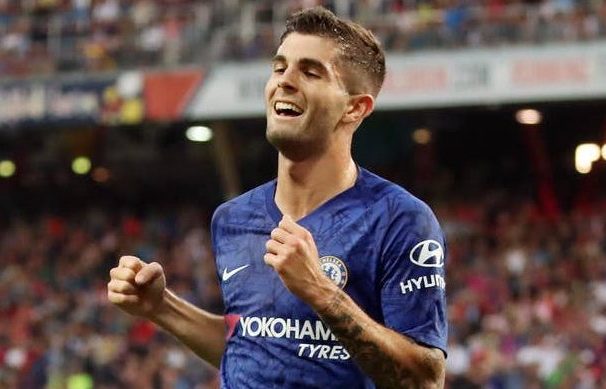 Christian Pulisic looks to be finding his groove with Chelsea as the English Premier League side prepares for their season opener.

Pulisic is coming off his first two-goal performance in Chelsea colors and was recently praised by manager Frank Lampard after a 5-3 friendly win over RB Salzburg. Not only did the 20-year-old show his quality against a tough opponent, but he impressed the former club legend in only his third match with the club.

“He [Pulisic] showed his quality and I love the nature of his goals where he has an intention to run behind the line and not come short,” Lampard said in an interview with the club’s website, “and the finishing was good.”

“It is what he is going to have to do because he is going to play in the Premier League and the Champions League, this is the top end. A winger has to have the desire not just to be tidy but to be getting in behind people and then with his quality he can be a really big player for us.”

Pulisic was able to beat the Salzburg backline twice in the match and notch home his first goals for the London club. He also won a penalty kick for his side, which Ross Barkley slotted home with ease. Chelsea raced out to a three-goal lead at halftime, before Salzburg was able to add some second-half insurance goals.

“He is a big signing for us with big potential, but the big question is he has to adapt to a different league, but I have seen already a really good attitude and a willingness to listen to information,” Lampard said. “He is 20 years of age so we have to remember he is young. I am happy to work with him, I want him to improve him.”

After leaving the German Bundesliga and Borussia Dortmund, Pulisic will gear up for a tough test in the Premier League. It’s a league that can see anything happen and every week an upset could be on the cards. Although Wednesday’s win was just a tune-up for an Aug. 11th season opener against Manchester United, Pulisic looks to be gelling well with his new teammates so far.

“I’m really happy to get the win, and to score my first goals for Chelsea was really great,’ Pulisic said. “All these matches are helping us prepare for the season that is coming up, we’re gaining our fitness back, we’re feeling really good and we’re excited for the start.”

“I’m really enjoying my football at the moment. Being at a new club is amazing, I’m really happy to be here, and the guys have been really welcoming. I have enjoyed every moment of it so far.”