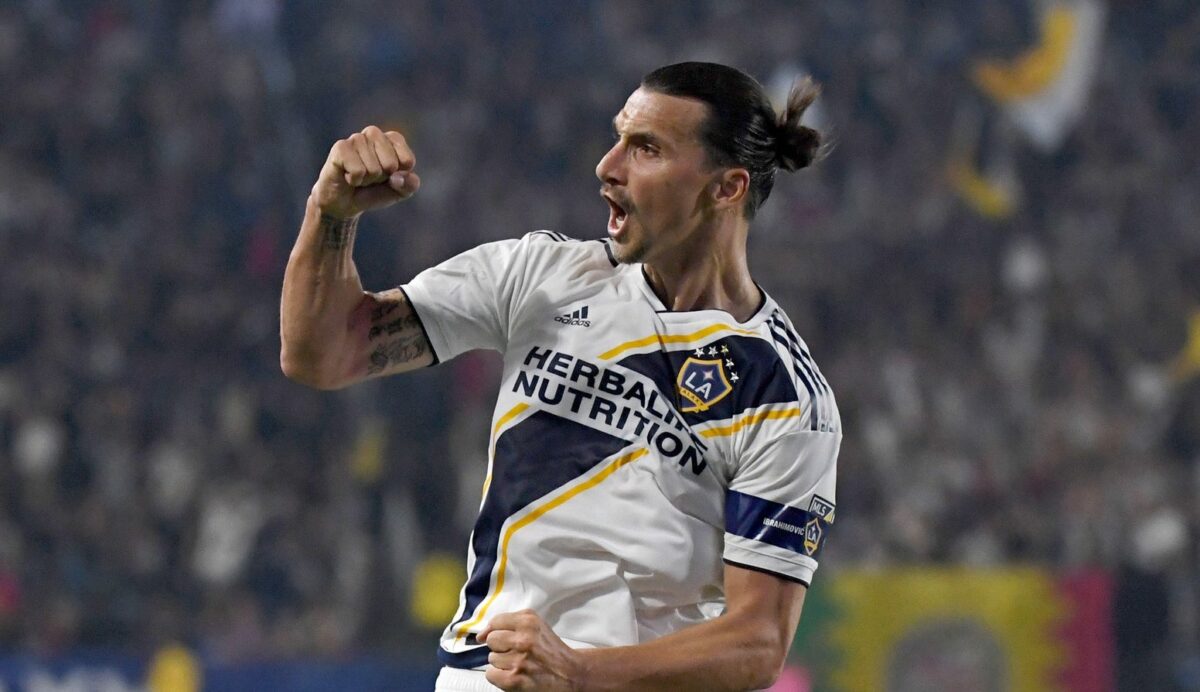 El Trafico is the headliner on Sunday night to close out the weekend as LAFC welcomes the L.A. Galaxy to Banc of California Stadium. Bob Bradley’s side became the first team this season to clinch a playoff berth after a road win over Real Salt Lake last weekend. Star forwards Carlos Vela and Zlatan Ibrahimovic will go head-to-head once again with both teams seeking another win under their belt in this rivalry.

Elsewhere, the Cascadia Derby takes place on Friday night as the Portland Timbers welcome the Seattle Sounders to Providence Park. The Hudson River Derby also takes place on Saturday as NYCFC hosts the New York Red Bulls in the Bronx. D.C. United takes a trip up I-95 to face the Philadelphia Union, while the Texas Derby sees FC Dallas host the Houston Dynamo.

Two of Major League Soccer’s top performers will go head-to-head for the second time this season.

Carlos Vela leads league leaders LAFC into Sunday’s El Trafico, already clinching a playoff berth and seeking a first win over the L.A. Galaxy. LAFC rolled past the San Jose Earthquakes 4-0 on Wednesday which saw Vela net a brace to give him 26 league goals. The Mexican playmaker will be joined by Adama Diomande and Diego Rossi in attack, while Walker Zimmerman’s return from suspension will line him up against Zlatan Ibrahimovic.

The L.A. Galaxy have yet to lose to LAFC, but will need to avoid going down early on the road. The club has only won twice in all competitions since their 3-2 win over LAFC back in July. Ibrahimovic will always be expected to produce in a big-time match, but eyes will be on the Galaxy backline and if they can limit Vela and Co.

The second Hudson River Derby of the regular season comes from the Bronx with NYCFC hosting their rivals, the New York Red Bulls.

Three points separate these sides in the Eastern Conference standings, with NYCFC holding an edge. Domenec Torrent’s men have won four of their last six league matches, including two this past week. A 1-0 success over the Columbus Crew saw Valentin Castellanos continue his strong run of form, netting his fifth goal in his past four appearances. Castellanos and Heber have 22 goals between them this season and will be the likely duo for production on Saturday.

Chris Armas’ Red Bulls would surely like to sweep the season series from NYCFC after a 2-1 home success back in July. A 2-1 midweek win over D.C. United gives the Red Bulls momentum coming into this match. Kaku and Daniel Royer have been consistent offensive pieces for the Red Bulls during their time with the club and both will look to draw their team level on points with their rival by weekend’s end.

A pair of sides needing a win in the East will meet in Chester on Saturday night as well.

The Philadelphia Union sit second in the East after a road loss in Chicago last week. It was a total letdown by Jim Curtin’s side who were unable to pressure the Fire, despite being a man up for the second-half. Just like their 5-1 road win over D.C. earlier this month, the Union need to start off strong if they want to avoid another zero on the scoreboard. Jamiro Monteiro and Kacper Przybylko will lead the attack.

D.C. United comes into this match needing a win to spark a surge in the standings as well. Wayne Rooney will play no part after being sent off against the Red Bulls, so Luciano Acosta and newly-acquired Ola Kamara will look to connect against Philly. Kamara scored midweek and will pose a physical battle for Jack Elliott and the rest of the Union backline.

Hosts Portland know a win will tie them with the Seattle Sounders in the West standings and move them away from FC Dallas, who are right on their tails. A 2-1 loss to Atlanta United ended a two-match winning run for Giovanni Savarese’s men, but they have won both meetings with Seattle in all comps this season. While Brian Fernandez’s goals have been crucial, Diego Valeri knows all about this rivalry and will look to pull the strings against Seattle at home.

Brian Schmetzer’s side are winless in four straight, but a rivalry win on the road would do wonders for their confidence. Different players have registered goals of late for the Sounders, including Raul Ruidiaz, Jordan Morris, and Nicolas Lodeiro. While all three are important, Cristian Roldan may have the biggest importance on Friday, dealing with the playmaking ability of Portland’s midfield.

Two rivals on the outside of the playoff places in the West will meet for the second time this season.

FC Dallas hosts rivals Houston Dynamo on Sunday night in the second installment of the Texas Derby. Dallas sit in eighth place due to goal difference and will need to put in a strong performance defensively at home. They’ve conceded 10 goals in their last four matches, posting a 1-1-2 record during that span. Matt Hedges and Reto Ziegler are the leaders of the backline and need to step it up for this contest.

Houston are winless in six straight and need three points to avoid any further drop in the playoff race. Mauro Manotas has 11 goals this season and Christian Ramirez’s arrival gives the Dynamo another goal threat offensively. They will however need a strong outing from their midfield, who will go up against the likes of Brandon Servania and Paxton Pomykal, two of MLS’ youngest stars.